WASHINGTON — A range of solutions and strategies — from the adoption of new business models to one-on-one mentoring from African Americans who’ve attained C-Suite positions — emerged Thursday at the inaugural HBCU “braintrust” of the Congressional Black Caucus Foundation’s annual legislative conference. 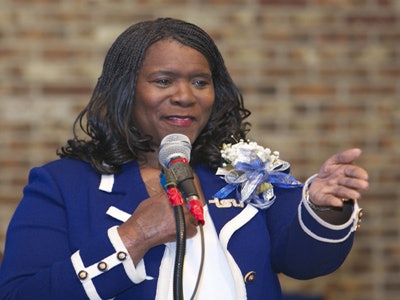 The jam-packed marathon discussion — convened by U.S. Rep. Alma S. Adams, (D-North Carolina), founder and co-chair of the Bipartisan HBCU Caucus — featured seven HBCU presidents, a number of representatives from corporations that partner with HBCUs, and several students who recounted how their respective HBCU experiences exceeded their expectations.

As with just about any discussion of HBCUs, substantial tension arose over whether HBCU leaders should even indulge in conversations that question the relevancy of HBCUs.

But it was hard to dodge the relevance question in light of the fact that it came from April Ryan, the noted CNN commentator who served as moderator for the portion of the event that featured HBCU presidents.

“That’s the new business model for the whole world,” Glover said. “Taking nothing and making something out of it,” she continued, noting that her own institution plans a large development project on nearby swampland. The project entails things that range from a business incubation facility to research centers, according to news reports.

“We have to think outside of the box,” said Morgan State University president Dr. David Wilson.

He listed a number of initiatives that he said are “pushing the envelope in terms of the new business model.” One — a transfer incentive program — involves partnering with two-year institutions in Maryland and offering students from those institutions $2,000 scholarships per year for up to $10,000 to complete their baccalaureate degrees at Morgan State.

Wilson and other HBCU leaders stressed the need for HBCUs to discard the notion that they can simply rely on incoming freshmen straight out of high school or provide education solely within the confines of bricks and mortar.

“You don’t have swarms of freshmen coming at you anymore,” said Dr. James A. Anderson, chancellor at Fayetteville State University. Rather, he said, there are older students with families, jobs and a desire for online education.

“If HBCUs are not investing in that, they’re going to fall behind,” Anderson said.

Dontae Bell, a Howard University student and pilot candidate in the Air Force ROTC who is set to commission as a Second Lieutenant in May 2018, spoke of how even though both his parents attended HBCUs — Spelman and Morehouse, respectively, where they both met and fell in love — he still harbored skepticism about the value of HBCUs.

“I wasn’t sold on them,” Bell said. “There were things I heard about HBCUs, common misconceptions that still exist today. Things like ‘you can’t get a quality education,’ lack of diversity, or that the administrative process will turn you off so much you will want to drop out entirely. None of those things are true,” he said of his experience at Howard, which began after a failed bid to get accepted at Princeton.

From Howard, Bell got involved in the ROTC and worked to increase diversity within the ROTC ranks after he realized he was the only cadet from Howard. Now, although he appreciates the value of staying apolitical in the military because of the nature of its mission, he stresses the need for more diversity within the leadership ranks of America’s armed forces as a matter of national security.

“Howard showed me how critical diversity is to moving forward,” Bell said.

Wilson, of Morgan State, emphasized the need for HBCUs to focus on boosting alumni giving — something he says has risen nearly 200 percent over the last eight years.

Key to increasing alumni giving is to tell more positive stories about what the institution has accomplished instead of dwelling on institutional shortcomings.

“We have to communicate with alums, get them feeling good about the institution, and I think you will see an uptick in the giving,” Wilson said.

“There aren’t a lot of people in the C-Suite who look like us,” Smith said. “So if you do have students who come in from HBCUs or happen to be one of the diverse classifications, they probably don’t have a lot of role models. We have to take more responsibility to bring them along and give them the true slice of what it is like to work in a corporation.”