López Cultivates Community in the Heart of Chicago

Dr. Ignacio López, an up-and-coming Hispanic leader in education, knows what it means to be community-minded.

As president for a little more than a year of Harold Washington College (HWC) — a community college within the City Colleges of Chicago system— López has introduced a culture of shared governance for students, faculty and sta­ff, and he regularly engages with community-based organizations.

Although he swi­ftly climbed the administrative ranks in higher education at the age of 38, his foray into education began with an experience teaching poetry to inner-city youth in Chicago after studying nonfiction writing and poetry at the University of Illinois at Chicago.

“I was really inspired by the students that were loving writing and engaging,” he says. 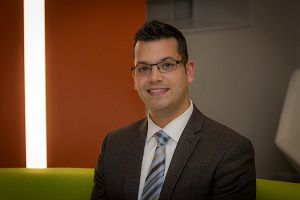 While working with youngsters in an a­fter-school program, a student told him that he should consider becoming a teacher. López decided to pursue a master’s degree in secondary education and teaching at National Louis University and soon began teaching English to high school students.

López quickly observed that students did not want to be in school, he says, adding that schools at the time did not have successful methods to intervene around behavioral or motivational issues affecting some students’ attendance and success.

During his doctoral studies, López designed non-punishment intervention tools to support teachers in helping their students stay engaged. He later became an administrator at his high school and was in charge of curriculum and instruction. At the same time, he was an adjunct professor at his alma mater.

López cites the period when Arne Duncan, then-president of Chicago Public Schools (CPS), brought two educational reform models to the district as a transitionary moment for him into higher education. Leaving CPS nearly a decade ago, López became a professor of education at National Louis and studied Duncan’s school turnaround program and the Academy for Urban School Leadership, among other reform efforts within CPS.

In 2012, López was appointed assistant dean of the National College of Education and, in 2014, deputy provost of academic and student affairs at National Louis.

The educator has authored and co-authored books and scholarly publications, including The Essential Classroom Management Checklist, ­The Empowerment Approach to Behavior Management and his latest work Keeping it Real and Relevant: Building Authentic Relationships in your Diverse Classrooms.

López has also served as an advisory board member for the Puerto Rican Arts Alliance, a governing board member of the University Center of Lake County, an elected East Prairie School Board member and a member of the education committee on the Illinois Latino Family Commission.

Harold Washington College, in need of a president, tapped López to serve in an interim capacity beginning last September. Now as the permanent president, he is beginning year two, having already made a lasting mark.

Kent Lusk, vice president of finance and operations at HWC, says that López began his tenure “with great energy.”

“One of his first acts as president was to invite dozens of community groups to the college to meet and discuss a partnership so Harold Washington College could further engage with the community,” Lusk adds. “Students were invited to this historical meeting.”

Within his first year, López says he is proud to have doubled the college’s partnerships with community-based organizations from 10 to more than 20. The dialogue between the groups has led to a level of transparency, particularly among students, López adds.

“It’s about really understanding how do we put ‘community’ back into community college,” López says. “It’s about doing more outreach to listen to where students are coming from within their community” and giving them access to higher education.

College access and affordability, especially for first-generation and undocumented students, are concerns for López who worked with City Colleges chancellor Dr. Juan Salgado to reduce tuition at Harold Washington to $146 per credit hour. Similarly, international students pay a lowered tuition rate as the college looks to welcome a global population.

López also worked with Mayor Rahm Emanuel, the City of Chicago and CPS to tell the story of the college’s Star Scholarship Program. More than 700 students took advantage of the program last year.

“Our Star Scholarship Program is the only one in the nation where you can get a 3.0 or better in high school and you can come to any one of the City Colleges here in Chicago for free,” López adds. “That includes if you’re an undocumented student as well … a Dreamer.”

López says that his philosophy for serving the college’s nearly 15,000 students is based on transparency, equity and community engagement.

“Our students are now saying, ‘How can we collectively come together as a family, as an organization, at least on a monthly basis to listen to the progress or the health of the college?’” he says. “… Students feel like they have an active voice in expressing their concerns. We do that through a shared leadership model that we’ve designed with our students.”

The Student Government Association meets with López’s presidential cabinet monthly to discuss the health of the college and other student concerns. On one occasion, for instance, students and administrators discussed access to scholarships and students’ want for more tutors to help with scholarship essays, as well as a need for more timely communication, López says.

Listening to students led to a number of additional changes at Harold Washington College.

The college began to focus on campus and college-level improvement by renovating student spaces, including the student atrium and the student lounge. After some students shared that the library and atrium closed too early, “we were able to expand those hours within the first year,” López says.

HWC students also wanted to organize a gubernatorial forum leading up to the Illinois elections last year so they could learn more about the candidates for governor.

“They partnered with [the] community and we were able to enact those practices and we had a great forum with all of the candidates here,” López adds. “All that stems from the students speaking up.”

“It’s been great,” he says. “The students want to be heard. We’ve been able to continue to listen to them.”

In addition to working with students and community- and faith-based organizations, the college has committed to working with faculty on shared governance under López’s presidency.

“I’m very proud of the fact that we’ve been able to start engaging our faculty regularly and listening to how we can problem-solve together,” he says.

As the year progresses, HWC leaders are set to launch a strategic plan that will move the college into the future. Key areas López and his administration will work on include partnering with Chicago Public Schools around early college, expanding portfolio programs such as the arts and continuing education, and the largest effort, expanding online and hybrid programming.

This fall, the college will begin a new partnership with the Joffrey Ballet to offer an Associate in Arts in Dance. Students will also be able to participate in Apple’s Coding Bootcamps as the college expands workforce training opportunities and launches new apprenticeship programs in IT, insurance, cybersecurity, business and more.

Students are being prepared through a series of courses that have “high-quality, relatable, market-relevant content,” López says, and they are “learning competencies and skills that we know are going to get them to be employable and/or also transferable.”

López’s system of shared governance will play a role in the college’s efforts to prepare students and the college for the future.

“His ideology of an inclusive culture across the various departments and disciplines is encouraging and creates a cohesive team environment,” says Lusk, the HWC administrator.

“Additionally, Dr. López has set the expectation to make data-driven decisions that we can use to continue to support our faculty, staff and students.”

“Dr. López has been a leader in establishing Harold Washington College as a partner of choice for four-year universities and employers, and helping to ensure our community college system delivers on our promise to connect Chicagoans to economic opportunity,” he says.  “Dr. López’s collaborative, data-driven, transparent and systematic approach has engaged college faculty, staff and students, resulting in creative, thoughtful new ideas that will ensure the college provides an excellent education to all students.”

This article appeared in the October 4, 2018 edition of Diverse.