Growing up with 14 siblings in rural Nebraska, Dr. Jim Tweedy had his first taste of privacy while living in the dormitories and earning his bachelor’s degree in business administration at the University of Nebraska-Kearney.

It wasn’t until his own Resident Assistant (RA) resigned two months after the semester began that Tweedy’s interest in residential life began.

“Frankly, it really started out as a great way to kind of pay for college and eventually be the only way that I could afford college,” says Tweedy, who is currently the director of Residence Life & Housing at the University of Delaware (UD). “But as I started to do the work, and really discover that you can help a great number of people and all the different connections you make and all the people that you could work with, I just found I think, a great deal of gratitude from just helping other people.”

Tweedy says becoming an RA at the University of Nebraska opened doors in residential life later on in his academic and professional career. While working toward a master’s degree in adult and higher education at Montana State University (MSU), Tweedy took on a graduate hall assistantship that not only gave him a job but paid for his tuition and room and board.

“I started to become really attracted to helping students in crisis,” says Tweedy. “Whether that was something that may have happened to them or whether that was an emotional struggle that they were going through, I really started to look at this idea of a residence hall being a really great place for not only us to help, but for us to be a part of a really important part and time of somebody’s life. That became something that was incredibly valuable for me at that point.”

After working at MSU for several years, Tweedy took a job at UD, initially intending to stay for four or five years while also pursuing his doctorate in educational leadership. This year will mark his 21st year working at the institution. 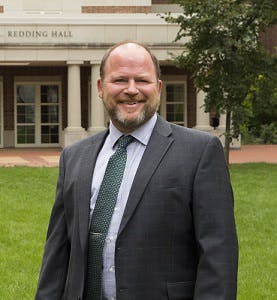 As director of Residence Life & Housing, Tweedy oversees 250 RAs and staff members who are responsible for providing a safe and educational learning experience for the 7,400 students living in on-campus dorms. He says that his main focus for the students living in dorms is to have a sense of belonging.

“I want every single one of our students to feel like this is a place they belong to, that UD can be a place that they’ve connected to and that our residence halls are a place they can call home and that it’s also a place for them to learn from one another,” Tweedy says. “It’s one of those pieces that if we can’t achieve a sense of belonging for students, the rest of the university life is in a tremendous struggle for them.”

Along with the Office of Residence Life & Housing, Tweedy strives to provide many inclusive and diverse initiatives and programs for students of all backgrounds. One of the organizations he’s most proud of is UJIMA, a peer-support group for RAs of color that focuses on improving the lives and the work of RAs of color but also the experiences of students of color in the residence halls.

Tweedy says that UD has another organization called RADIUS, a support group for RAs who identify as LGBTQIA+. RADIUS works on a monthly basis to increase awareness about the wide range of identities within that population, he says.

Another program that the Office of Residence Life & Housing assists with is “We’re First,” a network for first-generation students. “We’re First” is an academic transitions living and learning community for international students that encourages them to engage in a “culture exchange” of all-gender, all-LGBTQIA+ and racial justice living communities in dorms.

In addition, his office supports iHouse and the University Dive-In. iHouse is a program that brings together second-year international students and “world scholars” – students who spend their first semester of freshman year studying abroad and then live in the international house on campus during their sophomore year – in a living-learning community focused on intercultural dialogue and exchange, Tweedy says.

The University Dive-In is “really meant for students who are deeply interested to take a six-week plunge in some of their extracurricular activities and events that we support, to learning more about not only their own identity but the identities of others,” he says.

Tweedy says that watching the expansion of campus diversity has been an “amazing experience.”

“But every new perspective I get, I really do see it as a gift,” he says. “I think it helps me grow personally, professionally, and I’m hoping as many of our students as possible are able to have the kind of exchanges, those kinds of things that are so rewarding to me throughout my career and life on a college campus.”

This article will appear in the December 13, 2018 edition of Diverse.