Like the year before, 2018 has proven to be an important one for issues relating to diversity, equity and higher education. Most notably, this past year we witnessed up close a number of racial incidents on campus involving law enforcement being called on students and staff of color.

Over the summer, a Smith College student was racially profiled while eating lunch on campus. Oumou Kanoute, a sophomore, was eating lunch and reading a book in a common room on campus that requires keycard access when she noticed a White man and a White woman pacing outside the room’s entrance. Campus police arrived a short while later and told Kanoute — who is 5-foot, 2 inches — that a “Black woman demonstrating suspicious behavior” was spotted by an employee.

In response to the incident, Smith College president Dr. Kathleen McCartney apologized to Kanoute and announced that the school was hiring a third-party investigator to review the incident. Smith College was not an anomaly. It was the latest in a string of disturbing cases involving White people calling campus authorities to report Black people going about their everyday lives, including waiting for friends, napping or doing their jobs.

Officials at the University of Texas at San Antonio launched separate investigations into “possible discrimination” and “academic management of the classroom” after a Black student had police called on her by a White professor after she had put her feet up on one of the classroom chairs. The biology professor, Dr. Anita Moss, led university police to the student during her Anatomy & Physiology class and watched as the student was escorted out of the lecture hall. The video went viral on social media.

Not since protests in 2015, have there been massive demonstrations on campus like this year, with students taking to the streets to call attention to racism and racist symbols — like Confederate statues that still adorn campuses throughout the country. Students at University of North Carolina Chapel Hill toppled ‘Silent Sam’ and demanded that the statue be removed from the center of campus. When college officials pledged to relocate the statue to another part of campus, a group of teaching assistants and instructors pledged a “grade strike,” threatening to withhold more than 2,000 final grades if the university continued with its plan to house the statue of the Confederate soldier in a $5.3 million history center.

Meanwhile, the contentious and legal challenges to affirmative action resurfaced yet again, as the Trump administration abandoned Obama administration policies that called on universities to consider race as a factor in diversifying their campuses. Over the summer, the Education and Justice Departments rescinded seven Obama-era policy guidelines on affirmative action. The move came as a group of Asian Americans backed by a conservative anti-affirmative-action group sued Harvard University, claiming that they were systematically excluded from the Ivy League university. Legal experts predict that similar legal challenges to the policy will inevitably end up in the U.S. Supreme Court. With a conservative-leaning court, it is possible that affirmative action could become a policy of the past. 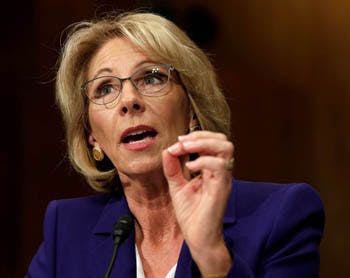 “The whole issue of using race in education is being looked at with a new eye in light of the fact that it’s not just White students being discriminated against, but Asians and others as well,” says Roger Clegg, a longtime critic of affirmative action and the president and general counsel of the conservative Center for Equal Opportunity. “As the demographics of the country change, it becomes more and more problematic.”

Affirmative action was not the only issue that faced a major challenge from the Trump administration. Earlier this year, U.S. Secretary of Education Betsy DeVos announced a rule that made it more difficult for students to cancel their student loans from for-profit institutions that shut down.  DeVos also presented new proposed regulations for Title IX and campus assault, the federal law that prohibits sex and gender-based discrimination in public schools around the country.

Some of the proposed Title IX regulations establishes a more narrow definition of sexual harassment. In order for a school to respond to a report, the sexual assault had to have occurred in the United States (excluding study abroad programs). In addition, the school must have actual knowledge of the alleged harassment and the alleged harassment must involve conduct that happened within the school’s own program or activity.

The announcement was met with concern and skepticism.

“I was deeply disappointed on behalf of all survivors,” says Dr. Penny R. Smith, president and CEO of Alegria Technologies, LLC and a sexual assault survivor. Smith says that the proposed definition of sexual misconduct as an incident that is “so severe, pervasive and objectively offensive” will foster a “culture of underreporting” on higher education campuses.

While many historically Black colleges and universities (HBCUs) experienced growth, there were some setbacks too. In February 2018, Concordia College — the tiny Lutheran College in Selma, Ala. — closed its doors.

Officials at the college — which was down to 400 students, 100 staffers and at least $8 million in debt — closed in May. With the loss of Concordia, the number of historically Black colleges and universities that are accredited is down to an even 100. Several experts like Dr. Harry Williams, president of the Thurgood Marshall College Fund, predict that small, financially strapped schools like Concordia will continue to struggle and face closure over the next 20 years. Williams has suggested that some schools even consider merging.

New presidents were installed at several HBCUs, including Delaware State University and Shaw University. In addition, President Trump appointed 13 members to the President’s Board of Advisors on Historically Black Colleges and Universities. Members of the President’s Board of Advisors on HBCUs are responsible for submitting recommendations to the president regarding the participation of HBCUs in federal government programs and informing the Secretary of Education on how to increase the role of the private sector in strengthening HBCUs, among other duties.

The higher education committee experienced several deaths, including Dr. Michelle R. Howard-Vital, a seasoned administrator who held leadership positions at institutions in four states —Illinois, North Carolina, Pennsylvania and Florida. In 2007, Howard-Vital was president of Cheyney University and later became provost and interim president at Florida Memorial University. In August, Dr. Sterling Stuckey — Distinguished Professor Emeritus of History at the University of California, Riverside and a prominent scholar of African-American history — also died. An expert on American slavery and African-American intellectual and cultural history, Stuckey was the author of numerous books including Slave Culture: Nationalist Theory and the Foundations of Black America. 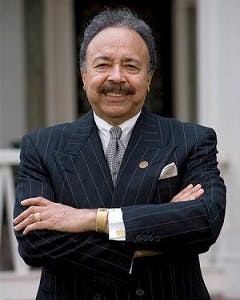 The death of former President George H.W. Bush prompted a tribute from Hampton University president Dr. William R. Harvey, who said that Bush was a longtime advocate and friend to HBCUs.

“George Herbert Walker Bush was a role model in many, many ways — as a man and as a politician — whether they were Republican or Democrat. He governed according to what he thought was right for the people, not the political party. Sometimes his non-partisan actions got him into political trouble, but that didn’t matter with him if he thought it was the right thing to do,” says Harvey. “He also talked often about forgiveness. I remember one time I was in the Oval Office when there had been a particularly critical report out on him a couple of days before. I asked him about it, and he said that he could not stay angry with reporters, politicians or others who had denounced, been critical or even lied on him. I specifically asked him about that latest flare up and he laughingly said, ‘Even if I get upset for the moment, I get over it quickly. Most times they don’t mean it; it’s just politics.’ That forgiving statement was the epitome of this wonderful, honorable and great leader.”

This article will appear in the December 27, 2018 edition of Diverse.