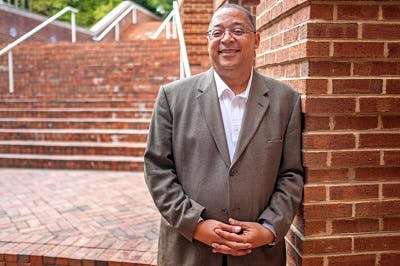 Growing up with little money and limited resources, Winston Crisp was expected to achieve something greater than what the previous generation in his family had.

To Crisp’s family, that meant becoming either a doctor or lawyer.

“I come from a family that until my generation came along, no matter how hard people had worked or no matter how smart people were, they just weren’t able to manage the opportunity for a college career,” says Crisp, vice president for student affairs at the University of Southern California (USC).

However, after being introduced to his first frog in science class, Crisp realized that the medical field was not for him. He later decided to pursue a career as a civil rights lawyer.

After being accepted to Johnson C. Smith University, Crisp became the first in his family to attend college.

“Everybody in my family before then spent their lives working at whatever job, whatever career, whatever work they could manage to find without regard to how fulfilling it was or whether it was really what they were dreaming about,” he says.

When first attending college, Crisp felt unprepared. He often spent time worrying about not being able to fit in because he felt that he didn’t look like the other students in terms of how he dressed or the experiences he had.

Crisp attended the University of North Carolina at Chapel Hill for law school. He was able to receive full-ride scholarships for both of his college degrees.

“Had it not been for those scholarships, I probably wasn’t going anywhere,” says Crisp. “I like to think I would have found a way. But a lot of people think they will find a way, but it’s not that easy.”

Crisp described himself as a student who “wanted to fix the ills of the world.”

Through his advocacy and outspoken nature, he formed a relationship with the dean of the law school.

The dean “decided to make me put my money where my mouth was and offered me a position working for her to try and create the kind of climate that I was always, frankly, fussing about,” he says.

During his time at UNC, Crisp led several initiatives, including a mental health task force to establish new policies and programs on campus. He also volunteered at Virginia Tech after the 2007 shooting and worked with the school’s administration to address student safety and mental health in the wake of the deadly massacre.

He says that the biggest challenge of working in administration is losing students.

“We lose students and while it’s the inevitability of life, it is the hardest and most tragic thing,” says Crisp. “I could probably walk you through every student I’ve lost over 30 years. Because they stay, they sit in your heart and they sit in your soul. That’s the hardest part and there’s nothing else that comes close, to me.”

In 2018, after feeling tired and burned out, Crisp decided to step down from his role as vice chancellor of student affairs.

“I had the experience of a lifetime at UNC,” he says. “It is and will in some ways always be my home. It is where I became an adult. It is where I spent the vast majority of my adult life. I’ve raised children there, and that place will always be my soul and my home.”

In his new role, Crisp hopes to provide students with equal opportunity and give them access to the resources they need in order to succeed.

This article appears in the September 19, 2019 issue of Diverse.