TheDream.US, the nation’s largest scholarship program for immigrant youth, recently released a new survey report on its scholars’ college experience titled, “In Their Own Words.” A section of the survey, conducted from May to mid-June via e-mail, was dedicated to how COVID-19 has disproportionately affected the scholars’ jobs, finances and family. 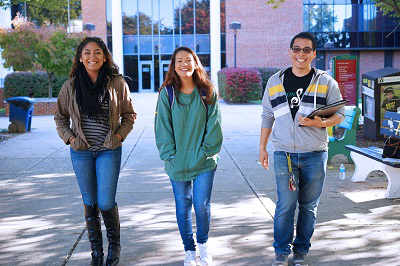 TheDream.US Scholars from the Trinity Washington University in Washington, D.C.

The survey of 3,850 scholars garnered responses from 2,681 students and was conducted amid the U.S. Supreme Court’s decision to reject the Trump Administration’s attempt to terminate Deferred Action for Childhood Arrivals immigration (DACA) policy, as well as the killing of George Floyd on May 25 and the heightened Black Lives Matter movement across the country.

“One factor is certainly the incredible impact of COVID-19 — on not just undocumented immigrants but their families,” said Hyein Lee, director of measurement and evaluation at TheDream.US. “A lot of the findings do speak to the fact that we’re not just talking about individuals who lost jobs. Oftentimes it’s mixed with families being undocumented” and now having loss of income.

According to the survey, scholars who worked decreased from 70% prior to COVID-19 to 43% post COVID-19. Of those currently working, 52% of the scholars are “essential” or “frontline” workers, which speaks to the population of DACA-recipients, Temporary Protected Status (TPS) holders and undocumented immigrants working in high-risk, high-contact roles during the pandemic.

Diego Dulanto is a junior studying psychology at the University of South Florida (USF). As a DACA-recipient and a TheDream.US scholar, he said the survey deeply resonated with him.

In fact, he and his parents are custodians. During the height of the pandemic, however, many of the buildings they worked in were closed either temporarily or permanently. For that reason, they weren’t sure if they’d be able to pay rent. Though the stimulus check helped somewhat, Dulanto says they are still struggling to stay afloat.

Given the financial impact of COVID-19 on scholars, Lee explained that a funder helped TheDream.US offer a one-time round of immediate relief in the form of an emergency grant. Every student enrolled or eligible to receive scholarship funds in the spring semester received $500.

“We know that that’s not much. But now, we’re really moving towards an initiative called ‘Career Connections,’ which rolled out this past summer,” said Lee. “It’s really gone into urgency with students needing jobs. We have several partnerships that we’re building and existing partnerships that help place students into internships or jobs.”

Lee also mentioned that many partner colleges have career resource and service centers on campus, so TheDream.US encourages students to utilize those opportunities as well.

Dulanto said TheDream.US helped him immensely by paying for his tuition — otherwise he would not have been able to afford or attend school. Moreover, “the community and having a sense of belonging” at TheDream.US gave him the support he needed. This past summer in particular, TheDream.US’ mental health advocate helped him stay strong as he was “going through a lot mentally and financially with COVID-19 and everything.”

Not only does Dulanto have to work and study while living with five other people in his home but he and his brother also guide their sister — a high school sophomore — through the challenges of remote learning, which makes the whole situation “a little more stressful” at times, he said.

Despite the uncertainty, the survey results indicated that 92% of the TheDream.US scholars planned to continue their studies for the fall semester at their college. In addition, 71% of survey respondents indicated they want to attend graduate school, which Lee noted the public might find surprising, especially amid the ongoing COVID-19 crisis.

“A common narrative that comes up in the qualitative data as well as our own experiences talking to our scholars, is that they understand the incredible sacrifice that their parents have made for them to live a better life,” said Lee. “Education, and in particular, higher education, is such a key piece to social mobility and achieving the American dream — however they define the American dream.”

“It’s not just about [scholars] creating a better life for themselves and their families. Oftentimes we hear that scholars want to be in jobs that ultimately contribute back to their community and to this country,” Lee added. As per the survey, 78% of respondents frequently or always feel the importance of giving back to the community.

The survey echoed the resilience and ambition of such scholars like Diego, who said, “My parents came to this country so that we can have a better life …. Eventually, I want to go for my master’s and Ph.D. in clinical psychology to open up my own private practice that’s accessible and affordable for minority communities.”

Lee said that undocumented immigrants have been excluded from discussions around the Coronavirus Aid, Relief, and Economic Security (CARES) Act and economic relief. Lee said that she hopes that the survey data can “bring more attention of the need for the federal government and state governments to include undocumented immigrants [in] their relief packages and policies” and also “highlight the immediate urgency and potential for additional emergency funds for scholars and partner colleges.”