Deja Peterson grew up in Camden, New Jersey and attended a high school with roughly 1,200 seniors. She was one of the few students to go on to college. 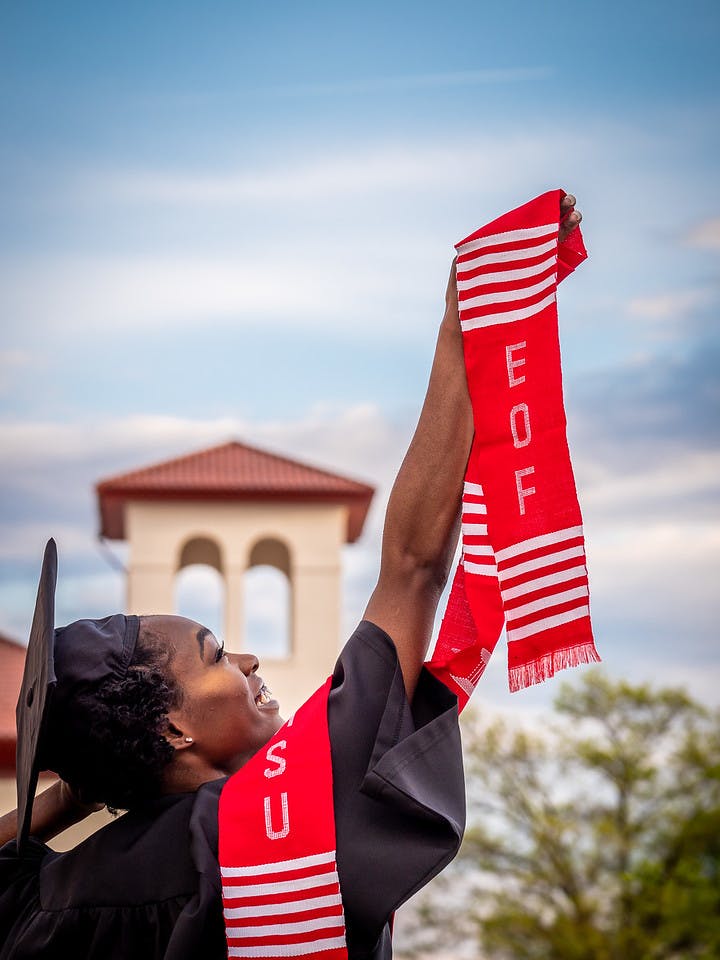 Education Opportunity Fund graduate wears her EOF stole with pridePeterson took advantage of the Education Opportunity Fund (EOF), a program started in 1967, after poverty and systemic inequities pushed Newark, New Jersey into a summer of violence. EOF was designed to offer financial and advisory help for first-generation, low-income students who demonstrated a commitment to education, allowing them to not only survive college but thrive.

With advisors by her side, Peterson was never alone in her college journey at Montclair State University. Counselors tracked her progress through her courses, helped her create an academic plan and access resources that could help her in hard times. But most importantly, they got to know her.

“When it comes to EOF counselors, they know me like the back of their hands,” said Peterson. “They can spot when something’s off. My counselors always talk me through it.”

Peterson’s counselors sensed her displeasure in her former field of study and helped her change her major and minor. Now, she’s studying what she’s been passionate about since childhood, majoring in jurisprudence, law and society, and minoring in child advocacy in policy.

Peterson is on track to graduate in May 2022, with a plan of one day going to law school. She credits her current success to the supports she received as a part of EOF.

“It makes college a lot more manageable,” she said. “I don’t know if I could have dealt without EOF support.”

EOF is just one of many assistance programs under the umbrella of the Future College Graduate Academy (FCGA) at Montclair State, led by assistant provost for special programs Dr. Daniel Jean. FCGA consists of several state, federal, or institution-run programs that help low-income or marginalized students access a quality college education. In 2016, FCGA students graduated at a rate of about 50%, the highest percentage at the university. Most recently, Jean was awarded $2 million from the state of New Jersey and the U.S. Department of Education’s Institutional Resilience and Expanded Postsecondary Opportunity (IREPO) program to help build the Future College Graduate Institute: Newark High School Dual Enrollment Program.

The Dual Enrollment Program will allow 100 scholars per cohort to earn up to 19 credits prior to their freshman semester while completing a service project in Newark and a chance to access a key element of the FCGA, the system of counselors and financial advisors. They will receive automatic enrollment at Montclair State if they earn 3.0 or better GPA.

FCGA currently serves about 1,000 students and the university hopes to double that amount within five years. 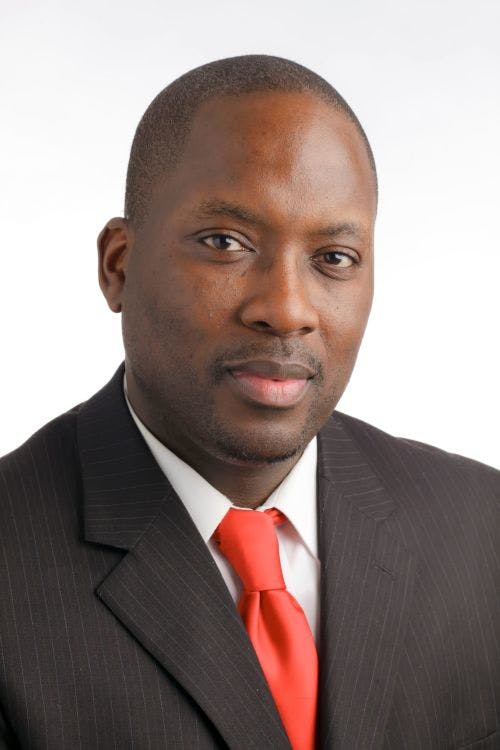 Dr. Daniel Jean“New Jersey has a large number of low-income families with pockets of poverty. Education is the key to make sure families don’t live that way,” said Jean. “The community needs to add to its college educated populace.”

Jean said he often struggles with public misconceptions about his program. Some New Jersey residents, he said, are still unaware of FCGA, or if they do know about it, they assume the state or school covers all funding. It’s one of the many reasons he is working to ensure that Newark and other New Jersey residents know about the transformative power of his program, something he experienced firsthand as an EOF scholar himself.

Jean is the youngest of five first-generation children born to Haitian immigrants. After he went back to school to get his master’s degree, his siblings did so too. Jean said this is an example of the academic “domino effect.”

“I had a 1.9 GPA in high school. That’s why this program is important. You’re floundering, and this says, ‘Hey, come to college,’” said Jean. “We want to ensure that first generation students can gain their college degree. It’s a symbol of excellence and achievement that can transform them as well as generations of their family.”

Gregory Collins, chair of The Montclair State University Foundation, Inc., has made it one of his goals to give back to the FCGA EOF program. He graduated from Montclair State in 1979, having been a benefactor of EOF’s resources and support.

2021 and 1979 share a lot of similarities. Students, said Collins, are still facing great financial difficulties, as “[college is] more expensive than ever, and urban kids still have cultural difficulties just making the change.”

“I was a street kid from north New Jersey, and now I’m an educated, sophisticated professional,” said Collins. “Given the person I was at the time, I’d say EOF was a major contributor to my success. EOF helped me adjust and kept me pointed in the right direction. I’m really thankful to them for that.”

Collins never saw himself going to college when he was growing up. He had athletic dreams that were crushed by a football injury in his senior year. He was the first in his family to decide to go to college to pursue learning, but he wasn’t the last. His younger siblings eventually followed in his footsteps.

Jean believes fervently that all students should be called scholars, something one of his EOF mentors taught that stuck with him. The terminology “transformed my mindset,” said Jean. “Now almost every program in the state of New Jersey has adopted that term, ‘scholar.’ It’s subtle, but very, very powerful.”

“The philosophy I have is that every encounter a scholar has either moves them closer to graduation or towards voluntarily withdrawing,” said Jean. “Whether that’s an experience in the cafeteria, with a professor, or with roommates in your dormitory hall. We develop a community.”

It’s all part of how FCGA builds its programs, transforming a scholar’s self-understanding. The EOF jumpstarts this process at their mandatory summer classes, a strictly regulated semester during which scholars adjust to the academic rigor required for collegiate success. They can study college writing, public speaking, or foundational courses and can earn up to six college credits before their fall semester.

One of Deja Peterson’s mentors attended this difficult summer program. Watching him, helped Peterson decide she wanted to join the program herself. She is now sharing her stories of EOF’s familial connection and support with her sister, who is applying to colleges this year. 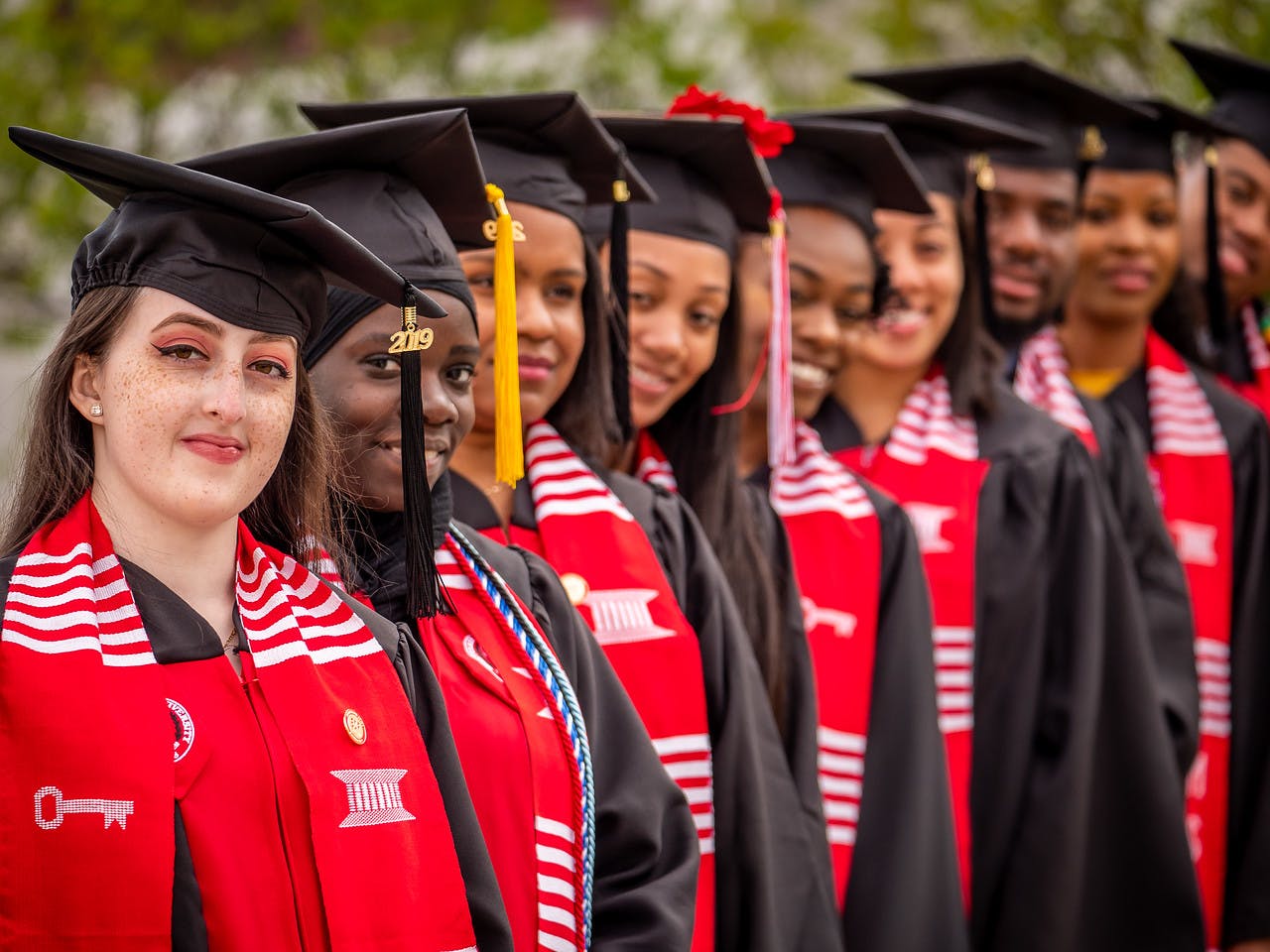 Class of 2019 EOF graduatesCollins said he kept in touch with his EOF advisors for at least a decade after graduation. Becoming a board member has brought him back into those circles again.

Jean, Collins, and Peterson are all united in their earnest wish for FCGA to continue to grow. Peterson said she would love for even more people to join, getting a chance at the incredible experience she had.

“It really does help,” said Peterson. “Students crave someone who’ll genuinely listen. A lot of times, in our communities, no one listens to you or cares about what you’re saying. But these people, in these programs—it really matters. What you say matters.”