With President Biden’s signature on Dec. 29, the new federal spending plan is set to increase the Pell Grant in 2023, allowing low-income students a chance to access up to $7,395 each year. The new total is a record high for the program, first created in 1972. Coupled with the $400 increase in the 2022 fiscal year, this is the largest two-year increase ever in the history of the grant.

But while higher education experts celebrate the new value of the Pell Grant and how much it can help students in need, many agreed the amount is not enough to combat the rising cost of living and tuition.

“We should understand that affordability is one of the biggest challenges facing higher education, now and into the future, as evidenced by increasing student loan debt,” said Dr. Linda Oubré, president of Whittier College in California. According to the Department of Education, about six million students received Pell Grant funding in the 2020 – 2021 academic year. The total student loan debt reached $1.75 trillion by the end of 2022, according to the U.S. Federal Reserve.

“On top of that, we have huge demographic shifts—fewer high school graduates, the traditional college-going market, with increasing proportions of students of color, Latinx in particular,” said Oubré. “Yet to keep our economy going, we need more graduates of higher education institutes.”

Oubré said that students often stop or drop out of education because of small, unexpected expenses which can force them to make difficult choices, like choosing whether to buy the gas needed to get to class or to buy a meal. Basic need insecurity commonly impacts first-generation and low-income students according to Chris Sinclair, executive director of FLIP National, a nonprofit, student-based organization supporting first-generation low-income students.

“The way I’ve seen first generation, low-income students penny-pinch and bargain hunt—when you see a first-generation student try to make a dollar out of 15 cents, any increase [to the Pell Grant] will help,” said Sinclair.

Dr. Ivory A. Toldson, professor of the counseling psychology program at Howard University and national director of education innovation and research at the NAACP, agreed.

“With the cost of living increasing every year, the Pell Grant often doesn’t cover all of a student’s expenses. In addition, the wealth gap continues to widen in the U.S., which means that there are more students who need help than ever before,” said Toldson. “Inflation is a significant issue for students, as the cost of college continues to rise faster than the rate of inflation. A Pell Grant increase can help to ensure that these costs don't become unmanageable for students, many of whom are already struggling financially.”

At Whittier College, Oubré has witnessed firsthand how more funding can make the difference in a student’s ability to complete college. During COVID-19, Whittier was able to direct federal support to the students. Those dollars, coupled with a $12 million donation in December 2020 from billionaire philanthropist MacKenzie Scott, were allocated into need-based scholarships, which Oubré said “resulted in some of the best retention rates we’ve ever had, particularly in demographic groups that are the most vulnerable, like African American men.”

“One thing I’ve learned from talking with students in trouble, a lot of times it’s $500 that keeps them [from continuing],” said Oubré. “I think it’s fantastic that students will get $500 more. Of course, they need more, but it’s better than not getting it.”

Dr. Karen A. Stout, president and CEO of Achieving the Dream, a membership network of community colleges working to achieve equity in higher education, said this increase will very likely keep current Pell Grant recipients on the path toward completion. But, she added, the increase might not be as helpful in getting more students from low-income backgrounds to enroll in college for the first time.

“When you get closer to doubling [the Pell Grant], you’ll definitely make a difference for low-income families,” said Stout. “This $500 supports students, helps them stay a little above water with inflation, with the cost of food, housing, and transportation all going up in the last 18 to 24 months.”

Stout said that increasing the Pell Grant is just one important piece of a “comprehensive strategy on addressing affordability,” including the FAFSA Simplification Act, which will improve access and eligibility for the Pell Grant.

“Our sectors aren’t always fully aligned on the importance of Pell. There’s not enough mainstream understanding of the Pell Grant,” said Stout. “The more that we have people who are able to say, ‘Pell was public policy instrument that helped me gain access to college,’ the more understanding we will have. We have to elevate that.”

Report: Now is the Time to Connect SNAP Eligible Students to the Benefit

Report: Now is the Time to Connect SNAP Eligible Students to the Benefit 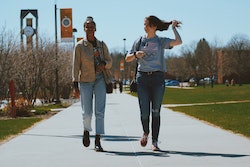 California Reconnect To Give Some College, No Degree Students A Leg Up