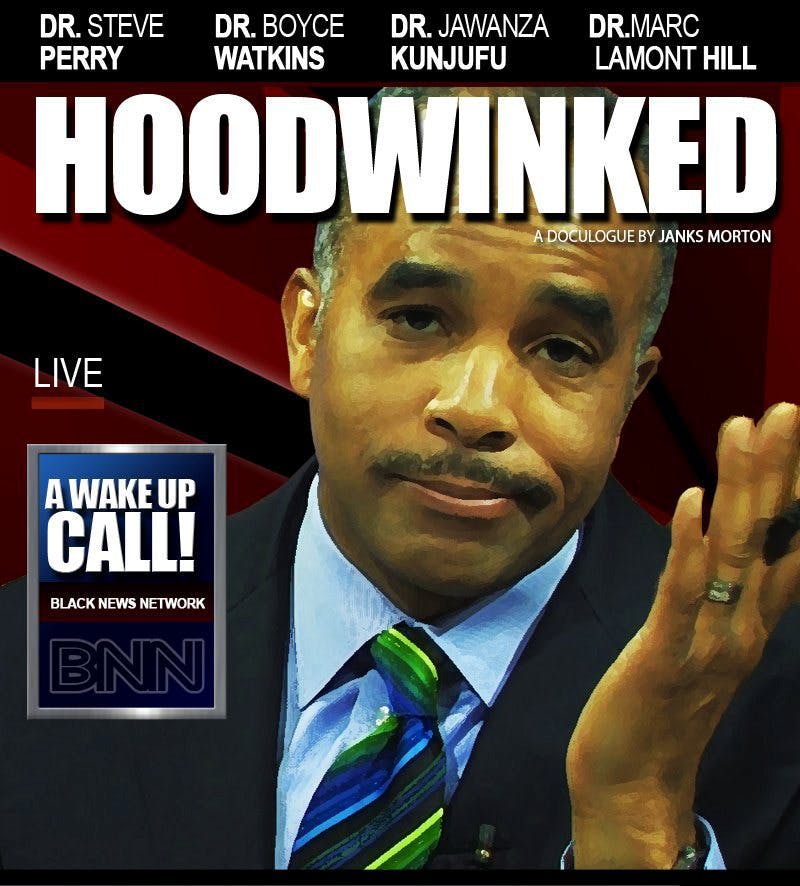 ‘Hoodwinked’ examines the notion that there are more Black men in jail than there are in college.

Documentarian Janks Morton has a simple message when it comes to statistics that portray African-Americans in a negative light: Go to the source and fact-check the figures for yourself.

This is the message that reverberates throughout Morton’s new movie, Hoodwinked: We Can No Longer Doubt Our Greatness,  which is being premiered in the coming weeks and months in various venues, including at 7p.m. on Oct. 11 at Howard University, where parts of the documentary was shot.

In the piece, Morton visits Howard and other campuses in the Washington, D.C. area to revisit a question for which he previously gained notoriety: Are there more Black men in college or in jail?

And he introduces another question that exposes the gap between what people believe the high school dropout rate is for Black males as opposed it really is.

On the question of whether there are more Black men in jail or in college, one Black student after another offers a ready answer that comports with the notion that more Black men are engaged in criminal behavior than are in pursuit of higher learning.

But the reality, Morton maintains in his movie, is that there are more Black men in postsecondary institutions than who are incarcerated.

But if the figures Morton cites prove reliable, why would anyone purposely lead us to accept statistics that make things seem worse than they really are?

The answer — which Morton has stated many times and which he repeats in the film — is: “There are people and principalities that have a vested interest in and are compensated to misinform you so that they can mismanage you. Your mismanagement leads to your division. Your division leads to their profits.”

Whether you agree or not with the movie’s conspiracy theorist tone, there is much to like about Hoodwinked.

For starters, it’s probably one of the rare, if not the only cinematic experience where you will see an array of real life Black scholars — including Boyce Watkins, finance professor at Syracuse University, Marc Lamont Hill, an education professor at Columbia University and Ivory Toldson, professor of counseling psychology at Howard University — opining on statistics and stereotypes and their impact on the souls of Black folk, particularly the young.

One of the most poignant scenes is when he replicates Dr. Kenneth Clark’s famous doll experiment, in which dolls were used to determine children’s perceptions of race, but modifies it to put the focus on higher education.

The colloquies probe deep and serious moral dilemmas, such as how to get funding to combat various social ills that plague the Black community without perpetuating statistics that serve to highlight deficits rather than strengths.

In short, this video should be required viewing for anyone who deals with, relies upon or even remotely cares about education statistics and other facts that form the foundation of what we know and believe about the Black condition.

At the same time, the movie has its share of faults.

Perhaps the movie’s most serious shortcoming is a segment where Morton blames a 2002 Justice Policy Institute report — titled Cellblocks or Classrooms?: The Funding of Higher Education and Corrections and Its Impact on African American Men — for what he said is the false notion that there are more Black men incarcerated than who are enrolled in institutions of higher learning.

Officials at JPI — provided a copy of Hoodwinked by Diverse — took issue with being omitted from a movie that mentions their organization by name.

“The filmmaker did not offer JPI opportunity for comment or explanation of its data collection and analysis during the production of the film,” said the statement, which includes a fact sheet on the methodology JPI used in its report.

“JPI stands by the methodology used in the 2002 report, noting that if the film producer had spoken with researchers, they could have walked him through the data.”

Perhaps more importantly, JPI said the intent behind the report was to highlight the trend in national spending toward corrections rather than education.

“It is JPI’s continued stance that the current criminal justice system doesn’t work, isn’t fair and costs too much,” the statement continues. “Our mission is focused on reducing the use of incarceration and its negative impacts on communities and promoting social investments that can help all people achieve positive life outcomes.”

Morton — who found fault with JPI’s methodology — makes no apologies for not including JPI in the documentary, saying he has sought comment from JPI in the past to no avail, knew what they were going to say and wasn’t interested in reaching out to them again.

The problem is viewers of Hoodwinked don’t know that backstory.

Whatever the case may be, the notion that there are more Black men incarcerated than in college predates the JPI report by more than a decade.

For instance, as far back as 1990, rapper Ice Cube — on one of the songs on his debut solo album, “AmeriKKKa’s Most Wanted,” asked the question: “Why more n—-s in the pen than in college?”

Scholarly acceptance of the idea also transcends the JPI report.

Princeton History Professor Emeritus Nell Irvin Painter touched on the topic in her 2005 book, Creating Black Americans: African-American History and Its Meanings, 1619 to the Present.

The situation may have changed today, based on the latest figures cited in Morton’s film.

To the best of Diverse’s knowledge, the movie’s premise that there are more Black men in college than locked up pretty much holds up, although the only figure that Diverse could find is that there were 1.18 million Black men enrolled in college as of the 2010 U.S. Census.

However, the mere fact that there are more Black men in college only gets at part of what’s going on.

Plus, it may not even make sense to compare the raw numbers of each group. A more meaningful statistic may be the Black male incarceration rate, which at yearend 2010 was 3,074 per 100,000, or nearly 7 times higher than the rate for White non-Hispanic males.

In terms of college enrollment, it may make more sense to examine rates of degree attainment than enrollment, because ultimately it’s the conferring of a degree that matters most. And attainment rates vary based on the type of degree conferred, not to mention the type of institution from which it was issued.

The bottom line is there are more layers of the onion that must be peeled back in order to make sense of it all. Hoodwinked is then, at the very least, a step in the right direction.