HBCUs on Front Lines of Fight Against Prostate Cancer 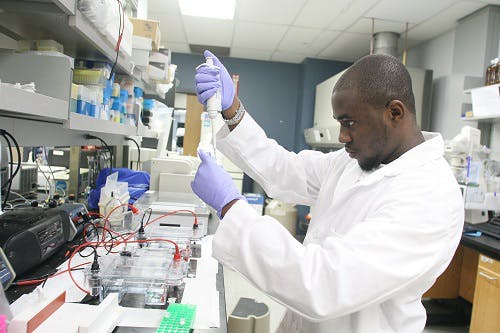 Those HBCU institutions leading the charge in prostate cancer research include Tuskegee, Clark Atlanta, Hampton and Howard universities and Morehouse School of Medicine.

Finding a cure for prostate cancer is personal for Clayton Yates, Ph.D., a researcher at Tuskegee University who also teaches cell and cancer biology. He is among the researchers at HBCUs who are dedicated to eradicating health disparities in prostate cancer—a disease that adversely impacts African-American males more than any other group.

Those HBCU institutions leading the charge in prostate cancer research include Tuskegee, Clark Atlanta, Hampton and Howard universities and Morehouse School of Medicine.

“I chose to focus on prostate cancer after my grandfather passed away of the disease,” says Yates, who is a principal investigator in a lab dedicated to prostate cancer research at Tuskegee University. “I was a student here at the time that he died, and I wanted to understand what could be done. I’ve dedicated my life to this research. ”

His work is a part of the Cancer Research Program at Tuskegee, which includes cancer research, education, research training, career development and outreach.

Yates is in good company along with Timothy Turner, Ph.D., who is the lead principal investigator for the Tuskegee University component of the Morehouse School of Medicine/Tuskegee University/University of Alabama at Birmingham U54 Cancer Partnership, funded by a National Institute of Health collaborative grant for the three-way collaboration for cancer research focused on health disparities and various cancers.

According to Yates, the University of Alabama provides tissue cell samples from African-American patients who have had their prostates removed.

“In the U.S., prostate cancer is the most commonly diagnosed cancer in males, and it results in 30,000 deaths per year,” says Yates, who shares the lab with graduate and undergraduate researchers. “Our lab is focused on identifying biomarkers that clinicians can utilize to identify prostate cancers that are more aggressive and, thus, are more likely to kill patients, with a special interest in relating these biomarkers to African-American men who have the more aggressive forms of prostate cancer.

Prostate cancer is a disease in which abnormal cells in the body grow out of control in the walnut-sized prostate gland. According to the Centers for Disease Control and Prevention, African-American men have a higher rate of getting the disease and dying from it than any other racial or ethnic group. One in five African-American men has a chance of being diagnosed, and one in 20 is likely to die from the disease.

Besides race and ethnicity, family history and increasing age are also factors that increase risk. Also, a more aggressive form of the cancer and unique genetic factors are areas that researchers are studying, as well as causes, treatments, cures and ways to improve early detection of the disease in African-American men.

Leading the way in prostate cancer research, Clark Atlanta University’s Center           for Cancer Research and Therapeutic Development reportedly is the only university center in the U.S. that is 100 percent dedicated to research and education on prostate cancer in African-Americans.

The director of the center, Shafiq A. Khan, Ph.D., an internationally known cancer researcher, was recruited nearly nine years ago to establish the center, which focuses on health issues related to the African-American community.

Khan says the center has been funded at $20 million in the last five years through sources including The National Institutes of Health, Georgia Research Alliance, Department of Defense and the National Cancer Institute.

What began with three people has grown to 40, including faculty, administrative staff, graduate and postdoctoral students on the fourth floor of a research building. The entire floor that is devoted to prostate cancer research is made up of laboratories and offices that Khan says are bustling from morning to night. That work is paying off in various ways, including filing for three patents and reportedly holding the largest African-American prostate cancer tissue repository.

“If you want to know why African-Americans get the disease more, you need those cancer samples to figure out the genetic differences to see why they are more prone to get it,” Khan says. “If you don’t have those samples, you can’t do the work. Not a lot of people have samples. We decided to build a repository of our own work and others’ to share our resources.”

“Cancer is a very complicated disease,” he says. “It’s not caused by one factor. We are trying to find markers and the reasons. Every day we are making progress.”

Khan says the team has published 46 journal articles and 212 presentations in national meetings since 2008. The center puts on the only national symposium on prostate cancer each year in March. “We invite people who are doing cutting edge research to present their work, as well as students who participate in a poster competition,” he says.

“Personally, I am proud of what we have done,” says Khan, who was born in Pakistan, studied in Sweden and was recruited while involved in cancer research at Texas Tech University. “When I came here, we started almost from scratch and built one of the finest research centers in the country. I am very proud to be a part of this operation. It’s the best job I’ve ever had.”

In the Tidewater area of Virginia, students and researchers are tackling prostate cancer through classroom and lab research, as well as by having an impact on patients in the community through treatment.

Just 10 minutes from the main campus, the Hampton University Proton Therapy Institute (HUPTI) treats patients with prostate, breast, brain, lung, ocular and pediatric and other cancers. The two-year-old facility was a $225 million project and the brainchild of Hampton University President William Harvey. The goal was to be the largest freestanding facility of its kind in the world and only the eighth such treatment center in the U.S.

Proton therapy is widely recognized as the most precise form of cancer treatment available to date. It is able to target the tumor directly and leaves healthy tissue unharmed.

The Tidewater area where Hampton is located serves a disproportionate number of African-American men who suffer from the disease. Last month, the Hampton University Proton Therapy Institute treated its 400th patient.