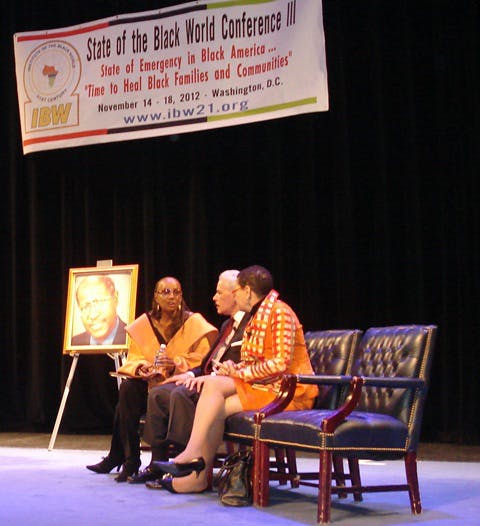 WASHINGTON — Howard University students Anthony Miller and Shaquille Turner said a more global outlook can be done when improving the Black community in America by working with other oppressed people.But fellow student Victor Ehienulo said Blacks in America and those of African descent worldwide must help themselves.

“I was called [derogatory names] by other African-Americans,” said Ehienulo, a 20-year-old junior from Nigeria who studies business. “If we can’t come together as Blacks first, then we can’t help anyone else.”

These and other topics were discussed at a student forum last week at Howard’s Blackburn Center in conjunction with the State of the Black World Conference at the school that lasted throughout the weekend.

Organized by the Institute of the Black World 21st Century based in East Elmhurst, N.Y., the event attracts activists, scholars and other dignitaries worldwide. The conference — the group’s third — is held after every U.S. presidential election to organize, educate, analyze and mobilize strategies and implement solutions to strengthen the Black community.

One of the event’s highlights was a town-hall-style meeting Thursday night at the school’s Cramton Auditorium where about 200 people heard from eight renowned panelists who talked about such topics as sexism, unemployment and education.

Essence magazine editor-in-chief emeritus Susan Taylor said a simple plan and not a “17-point plan” is needed to address problems such as the 86 percent of Black fourth-graders who are below reading level.

A few more ideas and solutions were offered earlier by Howard students.

Miller and Turner, both seniors, sat on a panel with fellow senior Adedamola Sokoya and Dominique Perkins, a 20-year-old junior, conversing on topics and challenges affecting college students in the 21st Century.

They acknowledged how their generation hasn’t “struggled” as much as their elders when it comes to fighting for the right to vote, enduring racism and combating other social ills.

Also, students use social media such as Twitter and Facebook to receive immediate responses and personalize their lives.

“Everyone is more self-absorbed, and if it doesn’t affect them directly, then it will not matter,” said Sokoya, 21, who has a double major in political science and economics.

Two solutions presented in changing the “all about me” mentality is mentoring and establishing an identity as a Black American.

But Turner said the message must resonate with fellow students.