Educators Work to Resuscitate Arts Education After No Child Left Behind 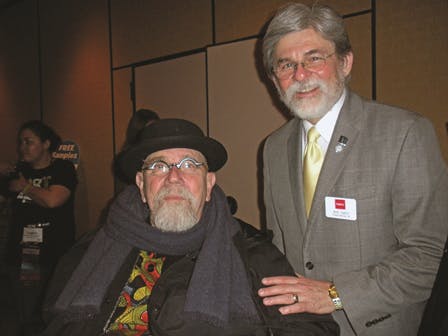 If you ask Dr. Robert F. Sabol, professor of visual and performing arts at Purdue University, art education has suffered some serious setbacks since No Child Left Behind — the landmark federal education law that put a greater emphasis on high-stakes testing.

Since No Child Left Behind became law in 2002, school systems — under increased pressure to raise student proficiency rates in the “core” subjects of reading and math — have less money to spend on materials such as paint and clay, and art instructors have less time to teach students what to do with those things, a Sabol study found.

“Art teachers were put in a very difficult position,” says Sabol, president of the National Art Education Association, based in Reston, Va., and author of the 2010 study titled No Child Left Behind: A Study of Its Impact on Art Education.

Sabol’s study found, among other things, that many art educators saw budgets for their programs decline under the federal law and the money redirected toward “core classes,” test prep and other areas.

But now — as the Obama administration grants states more flexibility under No Child Left Behind and state and local educators work to implement a new set of education standards known as the Common Core State Standards — art educators are hopeful that they can restore art education to what they believe is its rightful place.

“At this point, the Common Core is being implemented, so it’s a little premature to say how [art education] is going to be affected,” Sabol says.

At the same time, he says, the implementation of the Common Core State Standards represents a prime opportunity to recognize art’s role in helping to develop the much-heralded “21st Century Skills” — such as critical thinking and creativity — that proponents say students need to compete in the global economy. The Common Core State Standards Initiative is led by the National Governor’s Association and is meant to provide a “clear and consistent framework to prepare our children for college and the workforce,” according to the website.

Art education should also be seen as something that contributes to the economy and makes for a more thoughtful society, Sabol says. It is often the designs of artists, Sabol says, that influence consumer and civic decisions that range from what car or home to buy to how to interpret messages from political candidates and others who are trying to shape public opinion.

“Learning about art is extremely important in that regard,” Sabol says. “That’s not to mention the billions of dollars that the arts [contribute] to the economy.”

In order to get decision-makers to see the educational relevance of art, Sabol says the National Art Education Association has assembled teams of writers to develop art standards that are consistent with the Common Core State Standards. The art standards should be released within the next 12 to 18 months, Sabol says.

“The Common Core Standards can be taught rather successfully in the arts classroom if the instruction is focused on using language arts and math to learn about art,” Sabol says.

That wasn’t always the case under No Child Left Behind, Sabol says, noting that art teachers found themselves being forced to teach math and language arts during art class — and not necessarily by tying their lessons into art. In some cases, he says, art courses were eliminated altogether.

The case for making art a core part of education stands upon a growing amount of research.

Contrary to what some believe, it’s not that art education causes students to get better grades or score higher on tests, says Ellen Winner, professor of psychology at Boston College. Winner is also senior research associate at Project Zero, an educational research group at the Graduate School of Education at Harvard University. The group’s mission is to understand and enhance learning, thinking and creativity in the arts.

“There’s a lot of claims about how the arts make kids better students and raise test scores and SAT scores,” Winner says. “There’s certainly a correlation between students who take a lot of arts in high school and even lower grades and doing well in school in terms of academics.”

But the research has not been able to demonstrate a causal effect, Winner says.

“That doesn’t surprise me,” Winner says. “I don’t think taking an arts class is going to help you do better in things that academics test for, such as verbal and math literacy. But I think the arts are important for other reasons.”

Chief among those reasons, Winner says, is how the arts foster “studio thinking,” which entails what Project Zero refers to as “Eight Habits of the Mind.” Those habits include the ability to envision, engage and persist, express, observe and reflect.

Winner says there is no scientific proof that training in the arts causes these mental habits to “spill over into other areas.”

“We’re trying to look at that now,” Winner says. “If students are learning these habits of mind, these are the habits of mind that should be useful in any kind of study.”

Winner mentions a pending study that seeks to show if training in the visual arts improves envisioning in a way that leads students to do better in geometry.

“We’re in the midst of analyzing that data now,” Winner says. “It looks promising.”

In some states, art instruction is a matter of state law. For instance, in Missouri, fine arts instruction is part of the “Show-Me Standards” adopted by the Missouri Department of Elementary and Secondary Education in 1996.

In 2010, researcher Leslie Scheuler, president of the private consulting firm, LS Associates, did a study commissioned by the Missouri Arts Council to examine the benefits of art education in Missouri.

“The importance of the study we did is that it shows that it does not make sense to cut the arts if you’re trying to improve standardized test scores,” Scheuler says.

As with other studies that have found correlations between the arts and various academic benefits, the reason behind the correlation is a matter of speculation.

“Part of that could be that these educational environments are richer learning environments,” Scheuler says. “It could be that it’s a type of an approach, a more holistic approach … having people be well-rounded and teaching creative thinking.”

That’s what Adwoa Boakye, 21, had in mind when she began pursuing the arts at MIT. “As far as art’s role in helping me to build an understanding of myself, I would have to say that my independent work has been the main source of that,” she says.

Boakye is working on an independent study in Theater Arts that explores something she also does: dance. Specifically, she is exploring the question: What is dance, and can it, with today’s culture, be used to make discoveries?

Boakye says she has come to realize through her undergraduate studies that art has a technical aspect to it.

“Realizing this has helped me to see, appreciate, and use the connections between art and the technical world,” Boakye says. “It is currently my goal to continue down this path.”