HBCU Leaders Must Acclimate Themselves with Corporate Practices to Remain Relevant 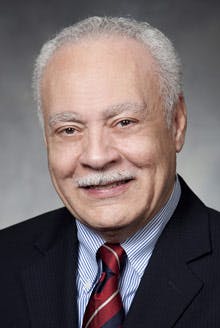 Washington – In order to ensure the future vitality of HBCUs, leaders of the institutions must position their faculty and students inside the corporate world to learn needs of business and how to speak business language.

It also pays to have administrators who know how to navigate the federal contract process and have principal investigators who have the requisite “depth and breadth” of knowledge that it takes to compete for coveted government contracts.

Those were some of the key pieces of advice that a top military research administrator proffered Thursday at the UNCF Special Programs Corporation 2012 Knowledge Forum.

“Talk to corporations about how you can help them with their R&D,” said Dr. Reginald Brothers, Deputy Assistant Secretary of Defense for Research within the U.S. Department of Defense. “Try to understand what a particular laboratory is doing.”

Brothers made his remarks during a panel titled “Small Business, Entrepreneurship and Innovation.” Brothers and other federal administrators said that, while it’s expedient to learn how the federal contract process works, nothing trumps relationships when it comes to getting results.

“Capital does not flow to the best ideas,” said David Hinson, National Director of the Minority Business Development Agency within the U.S. Department of Commerce. “It flows to the best relationships.”

Other panelists included an HBCU leader who could attest to that claim.

Dr. R. Timothy McDonald, Provost and Senior Vice President at Oakwood University, a little-known HBCU in Huntsville, Ala., recounted how relationships helped catapult the institution into a better position to compete for contracts.

Consequently, McDonald said, Oakwood became the first HBCU to attain ISO 9001 certification, which enables it to compete as a prime contractor. ISO stands for the International Standardization Organization, and 9001 is ISO’s code for a quality management system.

“We would not have been able to do that on our own,” McDonald said, crediting the relationship with SAIC for helping the institution achieve its new status.

Oakwood has also secured more than a dozen internships for its students to work at SAIC and earn $17 an hour. Three or four students have been hired as a result, McDonald said.

While McDonald and others vouched for the value of relationships for HBCUs, Bill Thomas, Associate Vice President within the Office of Government Relations at Hampton University, touted a different tact: persistence.

Speaking with the persona of a henchman as he referred to the duties he executes under his “boss”—Hampton University President William R. Harvey—Thomas advised HBCUs to set clear goals and doggedly pursue the funding needed to turn those goals into a reality.

As a case-in-point, he cited $20 million in public money that Hampton University secured for its Proton Therapy Institute—a cancer treatment facility—after having been denied more than a dozen times prior.

“You have to be persistent,” Thomas said, recounting how he turned down $500,000 for the endeavor because it was nowhere near the $50 million that he had been seeking for the project.

The institute will generate money from treating patients, and the university will in turn invest the revenue in other university projects, Thomas said.

“Our bottom line is to make money,” Thomas said. “If you’re not making money, you can’t be competitive. You can’t purchase the infrastructure to do these things,” he said in reference to various ideas that other panelists made for HBCUs to pursue in the realm of STEM education.

Much of the Knowledge Forum focused on how to inspire the next generation of scientists from among minority segments of the U.S. population, which one speaker noted are collectively projected to numerically overtake the White population within the next few decades.

During a session on STEM education, astronaut Leland Melvin, Associate Administrator within the Office of Education at NASA, spoke of the role of cultural icons, such as will.i.am, in encouraging future scientists. will.i.am recently wrote “Reaching for the Stars,” a song about space exploration, that was played on a NASA rover currently on the Martian landscape, Melvin also made reference to how Black astronauts such as himself, once famously referred to as an “afronaut,” could help inspire students to pursue careers in STEM.

But on a more practical level within the realm of higher education, Melvin said it’s important that it be made clear to college students how their science coursework is relevant to good-paying STEM careers.

“We’re losing 40 percent of students because they don’t see the relevance of what class means to them,” Melvin said of students who start out as STEM majors.