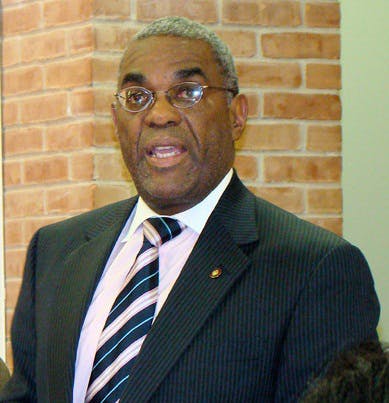 John W. Garland is the first president-in-residence of the Thurgood Marshall College Fund.

WASHINGTON – In a move that should bring new expertise and strategic guidance to historically Black public universities, the Thurgood Marshall College Fund (TMCF) has appointed John W. Garland, the former president of Central State University, to be the organization’s first-ever President-in-Residence. Earlier this month, Garland, who retired from Central State last July, began the year-long appointment at the TMCF office in Washington.

In the new role, Garland is working with TMCF senior executives to provide strategic counsel to the organization’s 47 member institutions and to offer guidance on TMCF policies and programs. Established in 1987, TMCF supports and represents nearly 300,000 students attending member schools that include public Historically Black Colleges and Universities (HBCUs), medical schools and law schools. Over a history of more than 25 years, the organization has become well known for raising funds for scholarships and providing career development opportunities for public HBCU students.

“I truly admire the work that they do and how they have developed and grown as an organization over the last 25 years. And to the extent that I can [share] some of my experiences to help them that’s what I’m looking to do right now,” Garland says.

Johnny C. Taylor, the TMCF president and CEO, says the President-in-Residence position Is expected to strengthen the “voice” of the HBCU president within TMCF as it develops and executes programs. “When you look at our constituencies and the groups of people represented on our board, we have students, we have governmental agencies, [and] we have employers. We have a number of stakeholder groups, and all along, we just didn’t have, in my opinion, sufficient representation from our presidents,” he says.

In putting together the President-in-Residence initiative, TMCF sought “an accomplished president who had a really good record … to give [the organization] the president’s view on all sorts of matters related to the work that we do,” Taylor explains. “The thinking is really about making sure that we have a recent, well-informed, and balanced perspective from a HBCU president about all matters of policy and programmatic initiatives,” he says.

When Taylor began searching for a candidate last year, the timing coincided with Garland’s departure from Central State. Garland, a lawyer by training, retired from the Wilberforce, Ohio-based school after a 15-year presidency. It was well known within the HBCU community that the attorney had engineered “a great turnaround job at Central State because it was struggling” when he became university president in 1997, Taylor says.

Under Garland, Central State saw its enrollment jump 160 percent, had eight new buildings constructed, created new academic programs and won designation as a Center for Excellence in Emerging Technologies, according to the Dayton Daily News. Garland is a graduate of Central State University and the Ohio State University law school.

TMCF founder and consultant Dr. N. Joyce Payne says Garland’s selection as the organization’s first President-in-Residence will prove highly beneficial to TMCF and its member schools. “He brings a wealth of knowledge in higher education” to the position, she notes. “We’re really pleased to have John on our team.”

“Our relationship [with Garland] goes back to the University of the District of Columbia. He was the general counsel then … I have had a very long and highly productive relationship with [Garland], and we’re just excited to have him aboard,” says Payne, who had previously been a long-time Washington-based advocate for public Black colleges as an executive at the National Association of State Universities and Land-Grant Colleges.

As a President-in-Residence, Garland receives a salary-level “honorarium.” Taylor declined to specify the honorarium’s annual value. The year-long appointment is renewable.

Among the top priorities Garland will tackle will be an effort to work on university board governance issues. Taylor says TMCF wants to develop initiatives that will improve the relationships between its member presidents and their university trustee boards. One goal is to avert the disruptive public disputes between university presidents and trustee boards that bring public embarrassment and punitive state government actions upon schools.

“We’re going to take a leadership role, TMCF, in addressing head on board governance, and John is taking the lead,” Taylor says. “Who better [to the lead] than a president who clearly had good board relations over 15 years? And so he’s got to be the guy who really informs our work in this area.”

Garland says he’s eager to take on board governance issues as well as those of developing and retaining executive leadership. While leadership and board governance issues have brought a few HBCUs a great deal of public attention in recent years, Garland does not believe that historically Black institutions disproportionately play host to public disputes between presidents and their boards.

“We’ve not had something as complex as what happened at UVA at our institutions. I think it’s important that we don’t focus on our institutions as being an anomaly,” he adds.

Garland says TMCF is in a position to conduct “a more focused analysis of governance issues and executive leadership” and “be able to provide consulting and other opportunities to Thurgood Marshall College Fund institutions.”