As the nation continues to crawl out of the Great Recession, some subgroups of Asian-Americans are among the poorest populations, based on income sources, home foreclosures and housing burden, according to a new study by University of California, Los Angeles researchers.

“On one hand, data has shown decade after decade the ongoing reliance on food stamps and social welfare programs by Southeast Asians,” De La Cruz-Viesca said. “But I’m also somewhat surprised, as we enter the fourth decade of them living in this country, that language barriers are still so persistent and that there haven’t been more experiences and opportunities to transition them to new labor markets.”

With financial support from the Ford Foundation, the UCLA scholars examined home ownership, income sources and other assets of Asian-Americans in eight states. Major findings of their study were released at the PolicyLink webinar.

In all eight states—whether California with the nation’s largest Asian population, or Mississippi where they barely comprise 1 percent—the researchers discovered that at least 64 percent of Asians were foreign-born. The rates in each state were higher than those of foreign-born Latinos.

Hmong-Americans in Fresno were also less likely than Asian-Americans across-the-board and Whites to receive Social Security benefits or retirement income.

During the same three-year period, about 12 percent of Cambodian-Americans in Los Angeles relied on cash public assistance, compared with only 1 percent of Japanese-Americans, the UCLA study showed. A far greater proportion of people of Japanese descent than Cambodian drew Social Security or retirement income.

Although such economic indicators showed Asians behind Whites, “my greatest concerns are the huge disparities” among some Asian ethnic subgroups, said Dr. Paul Ong during the webinar. Ong is a UCLA professor of urban planning and co-author of the study.

The significance of examining disaggregated data by ethnicity was illustrated by the economic inequalities in Jacksonville, Fla., where the only available information for a subgroup was for Filipino-Americans. The average per capita income among Filipinos there from 2007-09 was $24,705, versus $31,397 for Whites.

Filipinos and other Asians tended to have more wage earners contributing to income for a single household than did Whites in Jacksonville, the UCLA researchers said, suggesting that multiple generations of Asian family members often shared a home.

In San Francisco, long regarded as an Asian-American stronghold, at least half of the homeowners in six subgroups paid more than 30 percent of their income on housing from 2007-09, reflecting a so-called heavy housing burden.

“The wealth gap was closing before 2000 but widened during the Great Recession, due in part to the housing crisis,” Ong noted during the webinar.

For instance, the rate of home ownership among Asians as a whole declined 1.5 times faster than that among Whites. The subgroups hit hardest lost as much as 20 percent of their home value during the recession, Ong said. In some pockets of the country, subgroups such as Cambodians, Filipinos and Koreans lost their homes to foreclosure at rates twice that of Whites.

“The effects of the recession are still lingering for many people,” Ong said, adding that society “needs to think seriously about how to help rebuild these lost assets.”

Ong said “there was certainly evidence” uncovered during the study suggesting that many Asian-Americans chose to buy homes in neighborhoods near K-12 schools with high test scores. Because housing prices are driven in part by the quality of neighborhood schools, “these people made a conscious investment to be in these areas for the future of their kids,” he said. “But the houses also get bidded up, putting the people at greater financial risk and a greater housing burden.”

At this week’s teleconference further discussing the study, De La Cruz-Viesca, who is assistant director of UCLA’s Asian American Studies Center, said that, in addition to research, more coalition-building is needed between Asians and other racial groups.

“We need to know what commonalities we have,” she said, “so that we can better influence legislation to close the racial wealth gap.”

The UCLA researchers plan to examine socio-economic and housing trends among native Hawaiians and Pacific Islanders over the coming months and release their findings next year. 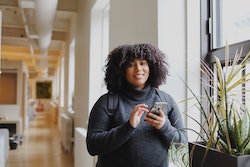