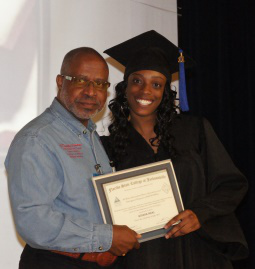 Professor Timothy Sinclair with Quiana Neal, who graduated from the Brownfields/Environmental Workforce Development and Job Training Program.Although Sarah Ashbrook received a degree in environmental science from DePaul University in 2008, like many recent graduates, she was still underemployed and seeking full-time work in her field a year later. After moving to Florida, she read an Internet announcement about Florida State College at Jacksonville training people for a variety of environmental jobs.

Ashbrook eagerly applied. Not only was she selected to participate in the program, but she advanced quickly, and today, she is program coordinator of the Environmental Workforce Development and Job Training Program at the downtown campus of FSCJ.

The U.S. Environmental Protection Agency recently announced its latest grants for that program, totaling $3.2 million, to 16 grantees throughout the country. And for the third time, Florida State College at Jacksonville is among the recipients. Ashbrook is involved in the management of the program and teaches some classes. Her responsibilities consist of collecting applications, performing callbacks, screening applications and conducting interviews, job placement, follow-up and tracking.

“Even though I thought I wanted to do more field work … this has turned out to be a good fit,” she says. “It’s a good program that has helped a lot of people, and I’m really happy to do it.”

According to the EPA, the grants support local efforts to recruit, train and place unemployed and underemployed individuals in jobs that address environmental challenges in their communities.

The participants are trained in numerous skill areas, including hazardous waste operations, Superfund site-specific cleanup, electronics recycling, emergency response and disaster site worker certification, clean energy and solar installation, weatherization, native plant revegetation and landscaping, and related operations. There are no educational requirements, although,h in the Florida State program, trainees are encouraged to have a GED or to be in the process of obtaining it.

Rather than filling jobs with contractors from distant cities, grants provide employment opportunities for local residents to participate in the revitalization of their own communities, says EPA spokesperson Enesta Jones.

As an example, Florida State’s training program includes 300 hours of instruction, including coursework for jobs as underground storage tank operator and sedimentation control inspector. There are also courses in collections and wastewater training, two emergency response classes, and 11 enhanced environmental health and safety training classes. A total of 22 state and federal certifications are offered.

Since the inception of the EPA’s program in 1998, more than 71 percent of program graduates have been placed in environmental careers. Pamela Scherer, grant manager of the program at FSCJ, says Ashbrook is just one example of a trainee who turned the job training opportunity into a successful career. Scherer says her program has trained 170 people since 2009, some of whom have found employment on their own; others have decided to further their education; and others have been placed by the program.

Scherer adds that, from the two previous grants, job placement has averaged between 78 and 84 percent, with most trainees working in their own communities.

“We try to recruit them from the areas that have the most contamination, so they can go back into the neighborhoods and help clean them up, so it’s a win-win for everybody,” she says.

A particularly successful part of the program, says Scherer, has been the disaster training, which has dispatched some of its graduates to areas affected by oil spills and hurricanes. Some of them have become supervisors and are now “making over $70,000 a year.”

“We turn a lot of negatives into positives and open doors of opportunity,” says Scherer, adding that, as part of the downtown campus, her program targets residents of the urban core. It is noncredit workforce training, part of the college’s Institution of Occupational Safety and Health. “A number of these students have never stepped foot in a college, so that is very empowering for them to be here.” She also notes that some of the top-performing students in the program transitioned into traditional higher education by enrolling in the college and studying environmental science.