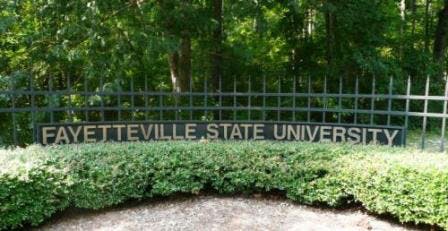 Fayetteville State University will kick off the second phase of its $25 million, five-year capital campaign later this week.

Recently, the oldest public institution in North Carolina kicked off the first phase of its $25 million, five-year capital campaign, the largest fundraiser in the school’s 147-year history. To date, the school has raised $7.1 million in cash and pledges during the first year, far exceeding the school’s one-year campaign high of $1.4 million. The second phase will kick off on Sept. 26.

“You have to set a target that sends a message that you have the ability to do significant fundraising,” said Anderson, who is in his fifth year at FSU. “As tough as it is fiscally for HBCUs, I don’t understand how they are not doing campaigns. This isn’t some arm-chair effort.”

Amid shrinking federal support, stalled alumni contributions and pundits questioning the need for historically Black institutions, a growing number of HBCUs are trying to move the funding needle by bolstering their fundraising efforts. They are becoming more strategic, pursuing new sources or partnerships, and utilizing nontraditional approaches such as social media. Their new business mindset is turning fundraising drives into donations and school pride into prosperity.

Campaigns are about more than just slogans, said Anderson. They expand multiple years, align with the strategic vision of the institution and focus on outcomes.

“The absence of a business model deludes institutions into believing they can continue doing programs with no return on investment,” he said, citing college athletics as a non-revenue-generating program at most institutions. “You never catch up and you never get ahead.”

The changing economic and political climate may also be creating the perfect storm for intensified efforts. As the economy rebounds, donors are once again loosening their wallets, which may signal an upswing for fundraising. New leadership at many HBCUs also beckons a fresh, new way of mastering an age-old practice.

“We realize that we have a rich, cultural legacy rooted in African-American tradition,” said Anderson. “However, we also have to evolve as a competitive, global 21st century university. It’s important to have that as your new brand.”

At Spelman College, Reshunda Mahone is helping to take fundraising to the next level. After spending most of her development career at majority institutions, Mahone brought some innovative ideas to the prestigious women’s college five years ago. Spelman now incorporates social media—especially Facebook and Twitter—to penetrate a broader donor base and has increased its use of fundraising volunteers to spread the message.

A diverse population requires a more deliberate approach, says Mahone. In addition to using more communication channels, HBCUs should target their message so it resonates with the audience. It must also educate potential donors about how the money will be used.

“We have to be more intentional and relevant about how we solicit, state the case and show the impact [of donations],” said Mahone, associate vice president of development. “It takes more to educate our constituent group and to help them understand concepts such as estate planning and trends in transferring wealth. We should always focus on the impact of the gift.”

During Mahone’s tenure, the alumnae donation rate has grown from 16 percent to a high of 41 percent. She credits the increase to creative strategies that extend beyond the traditional tactics to produce long-term benefits.

“HBCUs often rely on football, homecoming and other events to engage alumni, which isn’t a sustainable model,” she said. “Changing that paradigm is a long-term process, and schools should leverage everything that makes them unique as an opportunity to galvanize alumni support.”

Paul Quinn College in Dallas makes the impact of gifts very tangible for its donors (also considered as investors). The school adopted a business casual dress code that allowed donors to contribute clothes as a way of preparing them to become financial investors. The football field was turned into an organic farm to combat the surrounding community’s food desert, and the school launched the Center for Fundraising and Philanthropy, a training center for fundraising and development.

“We believe that, if you make a compelling case to donors, they will respond,” said Michael Sorrell, president of the 140-year-old college. “Our Center is now teaching people how to raise money by making that case. It’s working because we’ve given people something to believe.”

Quinn officials say the Center for Fundraising and Philanthropy is the only center of its kind at an HBCU, and one of a few national undergraduate fundraising programs. It houses an academic training program that gives students a deeper understanding of philanthropy and facilitates research and discussion about existing resources. Students also have formed a new collegiate chapter of the Association for Fundraising Professionals, created in collaboration with the association’s Dallas chapter.

The Center’s launch coupled with increased support from organizations such as the African American Development Officers Network and the Council for Advancement and Support of Education, which are helping to position fundraising as a business and a profession.

“There’s a segment of people who don’t appreciate the sophistication and acumen involved in fundraising,” Sorrell said. “And they’re the people who will never raise significant amounts of money.”