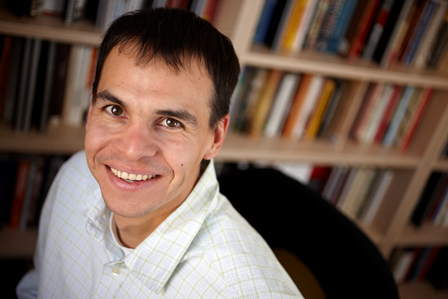 It’s not often that a child decides in elementary school that he wants to grow up to be a historian. But Dr. William Bauer, associate professor of history at the University of Nevada at Las Vegas, drew his earliest inspiration from field trips to California state parks.

Growing up on the Round Valley Indian Reservation in Northern California, Bauer says he noticed certain omissions. “Very often native people were ignored in these parks,” Bauer recalls. “They rarely made reference to the native people who were indigenous to these areas. So I wanted to devote my time and energy to looking at the role that native people, and native workers, had in helping to create what we know about the American West.”

Bauer says his work differs from other research that has been done on the Round Valley community and other reservations. “Much of [the research] that [has] been done tends to look at what non-native people did to native people; what my work emphasizes is what Native Americans themselves have done and are doing.” He relies heavily on oral history records and on his own oral interviews.

Bauer uses his teaching and writing as part of his ardent battle against “preconceived notions about what Native American history is about and who native peoples are.

“Sometimes I get a bit frustrated,” he says, “because students will talk about Native American culture as if it is one culture, when in fact there are more than 500 sovereign Indian nations in the United States.”

Bauer, who is Wailacki and Concow and teaches American West and Native American history, requires his students to attend an annual fall powwow that is held in Las Vegas, so they can experience a native community gathering.

“I work hard to combat the popular stereotypes about native people,” Bauer says.

His current project is evidence of that effort. “Indigenizing California History,” a book in progress, makes the argument that in the 1930s California Indians used their oral history and oral narrative to offer their own versions of the state’s history, which historians and anthropologists ignored or never heard. “I want to insert California Indians into the intellectual history of the United States in the early 20th century,” says Bauer. His past works include We Were All Like Migrant Workers Here: Work, Community and Memory on California’s Round Valley Reservation, 1850-1941; essays on California Indian history in the Western Historical Quarterly; Native Pathways: American Indian Culture and Economic Development in the Twentieth Century; and A Companion to California History.

“He is transforming the field of American Indian history,” says White. “Dr. Bauer is creating a legacy that encompasses the culture of California’s Round Valley Reservation and, furthermore, common American Indian traditions throughout the United States.”

“He is an emerging scholar with an opulent desire to build bridges between the extant history and today’s current state,” White adds.