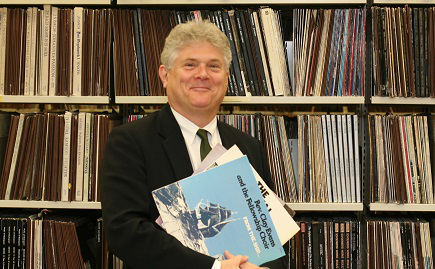 Project director Robert Darden says the four-decade period that the project covers is known as the “Golden Age of Gospel,” during which the music partly came under the influence of and reflected the American civil rights movement.

When the National Museum of African American History and Culture opens in 2015 on the National Mall in Washington, Baylor University will have made a valuable contribution to the new museum by allowing access to the school’s renowned Black Gospel Music Restoration Project.

This past December, the Smithsonian Institution announced that a significant portion of the Black Gospel Music Restoration Project’s digital collection will be included in the new museum’s Musical Crossroads exhibition, which will present the story of African-American music from the arrival of the first Africans in North America to the present day.

“What could be better than the world’s largest museum complex with millions of visitors coming through to have the opportunity to hear this music?” says Robert Darden, the Black Gospel Music Restoration Project (BGMRP) director and Baylor University journalism professor.

Darden noted that the inclusion of preserved music in the national museum represents a milestone achievement for what is believed to be the largest archive, including digital copies and vinyl records, of African-American gospel music produced from the 1940s through the 1970s. Darden estimates that more than 25,000 songs have been archived into the BGMRP’s digital collection. The project was established in 2008 and is maintained by Baylor Libraries’ Digital Projects Group at the university.

The four-decade period that the project covers is known as the “Golden Age of Gospel,” during which the music partly came under the influence of and reflected the American civil rights movement, according to Darden.

“The project’s original goal is to save the music and then eventually make the music more widely disseminated and available … ,” he says. “[The Smithsonian collaboration] is a dream come true. I never thought it would come true in this particular way.”

Dwandalyn Reece, the NMAAHC’s music and performing arts curator, has said the BGMRP recordings will be an important addition to help museum visitors understand gospel’s contribution to the social history and spiritual life of African-Americans.

The BGMRP has largely grown out of the pioneering research and journalism Darden has pursued throughout his career as a writer and scholar. Not long after completing the book People Get Ready!: A New History of Black Gospel Music, which enabled him to gain tenure at Baylor, Darden wrote a New York Times op-ed in 2005, in which he estimated that as much as 75 percent of the nation’s recorded “Golden Age” Black gospel music could be lost if Americans failed to preserve copies of the forgotten vinyl records.

Dozens of people responded to the op-ed by sending collections of Black gospel music recordings to Baylor, and numerous collectors offered the university access to their records so that they could be digitally copied. One collector, Charles M. Royce, donated funds that led to equipment purchases and the hiring of an audiovisual specialist. Another gospel music collector, Bob Marovich, has provided access to his collection of more than 3,600 gospel 45s and 78s and more than 1,600 gospel LPs.

Darden, who is White, is regarded as a leading scholar of Black gospel music. He says his interest in the music began when he became captivated as a six-year-old listening to a Mahalia Jackson gospel album of Christmas songs in 1960. His father, an Air Force officer who had African-American friends while working at racially-integrated military bases, had purchased the album, along with others, in celebration of a pay raise.

That early exposure to gospel music and living in racially-integrated military communities turned Darden into a big fan of Black music. As a teenager and young adult, he played the drums in soul and funk music bands. In the 1980s while working as a journalist, Darden became Billboard magazine’s first full-time gospel music editor. Eventually, he returned to Waco, Texas, where he had lived as a Baylor undergraduate and as a newspaper reporter after graduate school.

Pattie Orr, vice president for information technology and dean of University Libraries at Baylor, says that Baylor is eager to work with the NMAAHC and other Smithsonian museums. The university will gain new knowledge and expertise on the preservation of audio recordings that should enable the school to be a leader in the field, she says.

“We will be leaning new techniques of how to preserve,” says Orr. “I don’t think there are too many universities that are doing a lot of digital music preservation as we are and we want to learn more to improve our digitization techniques.”