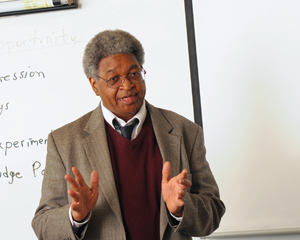 Dr. James Harrison has been successful in incorporating images of Blacks, immigrants, American Indians and other groups “so students get the idea that many of us together created what is the U.S.”

In Harlem, N.Y., during his sophomore year of high school, Dr. James Harrison spent his study period in the library, engrossed in novels by Black authors.

He began with two books by Langston Hughes: one about the first Negro scientists and another, The First Book of Negroes, about the accomplishments of African-Americans. Harrison realized that these stories were not a part of his public school curriculum and took it upon himself to do his own research into African-American studies.

Harrison continued to study African-Americans and other minorities in the U.S. for more than 30 years. He attended Hunter College in New York, graduating with his bachelor’s in 1967. He has read countless biographies and journal articles, and attended conferences across the country, exchanging knowledge with fellow historians.

Through his research, Harrison found that the lack of African-American stories in classrooms can be traced back to the 1870s through the 1890s.

“Blacks were written out of books as a reaction to the Civil War,” says Harrison, a U.S. history professor at Portland Community College in Oregon. “The leading historians from Columbia University decided that Black people were really not important and so they were completely written out to the extent that, when I was in high school, I was told that slavery was not all that bad because there was only one rebellion, Nat Turner. Completely untrue.”

Although Harrison believes that integration of colored faces into textbooks has improved over the past decade, much of the educating that happens today still lacks pertinent contributions to American culture.

Harrison entered the field of academia to counteract many of the discrepancies he found in the classroom as a youth. His professional resume spans teaching in secondary and post-secondary schools, being a principal of a Catholic elementary school and a college counselor.

His most rewarding experience in academia has been as a college professor.

“I taught high school for 18 years and I enjoyed it, but I was looking for a greater challenge and I found that at the community college level,” Harrison says. “I’ve been here for 21 years and it’s still a challenge. The students have real questions; it forced me to dig much deeper and do a tremendous amount of reading in anticipation of questions.”

In the classroom, Harrison has been successful in incorporating images of Blacks, immigrants, American Indians and other groups “so students get the idea that many of us together created what is the U.S.”

Throughout the Portland metropolitan area, he is known for sharing stories of unknown historical figures, events or little-understood twists and turns in history.

For nine years, he has shared passages via email with the college during Black History Month. In addition, he visits local churches, organizations, hospitals and corporate industries throughout the year, educating individuals in the community.

One of Harrison’s personal African-American heroes is Frederick Douglass. While many are aware of the former slave and abolitionist, Harrison admires Douglass’ strength and his multifaceted character.

“He was a very humanitarian person, a strong advocate and had a thirst for knowledge,” notes Harrison. “This man lived in a time when he was deprived of so much, but accomplished quite a bit. If you would have told someone in 1820 that this Black guy who is now a slave will later become an adviser to presidents, they would have laughed at you.”

He also speaks of Black inventors who have impacted modern life. In 1883, Jan Ernst Matzeliger patented a machine that led to the automatic process for making shoes.

Currently, Harrison is working to put on paper a story that hits close to home. His first book will center on the city of Vanport, Ore.

Vanport was home to Oregon’s first Black law enforcement officers and teachers. On May 30, 1948, a flood collapsed the dike separating the city from the Columbia River and the town was destroyed.

By revealing what actually happened in history, Harrison believes individuals will have the courage to fight injustice like the movers of Vanport and heroes like Douglass.

“My personal legacy would be for people to realize that they need to be involved in the struggle against ignorance and the struggle for social justice,” Harrison says. “People need to be treated as people and not give up in despair.”