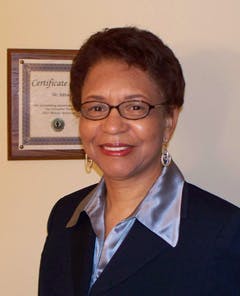 Dr. Edna Greene Medford is one of the few Black female historians who is considered an authority on the presidency of Abraham Lincoln, the Civil War era and African-Americans in the Reconstruction era.When Dr. Edna Greene Medford begins talking to people about America’s sesquicentennial, it’s not surprising that few people know what she’s talking about. When they realize what it is, the topic is one that frequently causes discomfort and squirming, she says.

Medford is a historian, one of the few Black female historians who is considered an authority on the presidency of Abraham Lincoln, the Civil War era and African-Americans in the Reconstruction era.

The sesquicentennial, the recognition of the 150th anniversary of the War Between the States, now in its third year of a four-year commemoration, has helped put the issues of slavery and the Civil War back on the front burner and has kept Medford busier than usual, she says. Many institutions, including local and state government agencies, are staging events to recognize the significance of the war.

Black Americans are being encouraged to be more than bystanders in today’s sesquicentennial activities, says Medford, marking a dramatic change from the 100th anniversary commemoration programs 50 years ago.

Today, sponsors of sesquicentennial events are making sure Blacks have a part, she says, thereby recognizing the important role Blacks played leading up to, during and immediately after the war.

Among her chances to discuss what she feels are important aspects of the era, Medford refers to an opportunity she had recently to speak at a sesquicentennial event at the Virginia Statehouse.

“It is the most important period of American history,” says Medford, chair of the Department of History at Howard University, explaining how President Lincoln and the ending of the Civil War set the stage for the nation to chart a new future. “We were at a crossroads. The issues we deal with today were born in this particular period.”

Medford traces a long list of challenges Black people face today back to the problems their ancestors faced after the Civil War: free with no real preparation or well-defined safety nets to help them with the educational and economic challenges that free people face.

“The problem isn’t about Black people losing out because of slavery, but what happened after slavery,” Medford says. “[The nation’s political leaders] could have given us that level-playing field [after the war], but they didn’t.

“As a historian,” continues Medford, “you can see what could have happened [in the years after the war], but didn’t because the [American leaders] who were there at the time didn’t want to go down that road.”

Medford, a Virginia native who was the first in her household to attend college, says Black people’s aversion to talking about slavery and the Civil War may be understandable, but isn’t justified.

“African-Americans, in general, want to forget about slavery,” she says. “They keep forgetting the onus was not on the enslaved, but the enslaver.” Black people, for some reason, feel a sense of guilt for being enslaved and what was done to many of their ancestors during slavery, Medford explains. As a result of this mindset, generation after generation, Black people deny some important history — their own.

The uneasy feeling that is still commonplace among average Americans has begun to subside a little among those who have given the issue serious attention, says Medford, crediting movies such as 12 Years A Slave, Lincoln and other similar presentations for stimulating debate.

“Movies like that have helped, although people say they didn’t realize things like this happened, [that] they are shocked,” says Medford.

Every chance Medford gets to make these points, she doesn’t miss, as she is a frequent guest on C-SPAN in discussions about President Lincoln.

“I hope [that] in my lectures to people, I’m getting the word out,” says Medford, who is a part of the small cadre of Black women historians who are now helping to tell the broader story of the Lincoln-Civil War era.

“It doesn’t matter to me if I’m reaching one or a thousand,” says Medford, noting that her speaking venues have ranged from a state capitol to a prison. “I’m getting to them one by one.

“For African-Americans, it inspires,” says Medford of their learning more about the Civil War era. “In terms of White Americans, they will see it was a nation created by a variety of people.”