Black, Latino Students On Outside Looking In at America’s Top Public High Schools 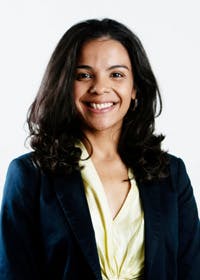 To much fanfare, US News and World Report released their list of the best public high schools in the country this week. They ranked high schools by how well their students performed within their state, how well they prepared their most disadvantaged students, and the extent to which students participated and did well in advanced coursework (Advanced Placement and International Baccalaureate courses).

Going to a high school that provides strong academic preparation and support comes with intrinsic advantages. Rigorous coursework is one of the most important factors colleges consider in the application process. Even truer at colleges that are competitive to get into, not enough Advanced Placement or Honors courses can leave admissions officers wondering whether the applicant is a slacker or unable to keep apace with college-level work. But Black and Latino are less likely than their peers to attend a high school that offers rigorous coursework, where some high schools even lack Algebra II, a basic admission requirement of many colleges.
More so, even if the high school does provide college-level coursework, Black and Latino students are less likely than their other peers to be found on their rosters.

Figure 1. The top 20 USNWR high schools by representation of Black and Latino students 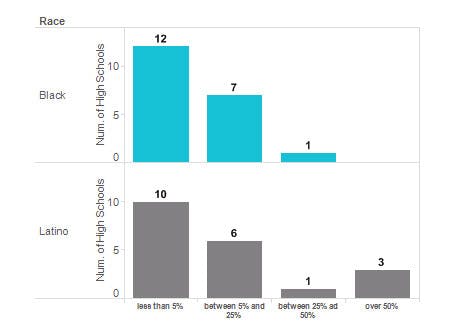 Sources: US News and World Report Best High Schools Rankings, 2014; Civil Rights Data Collection, 2011 Survey
Many of these high schools lack racial/ethnic diversity because they are in areas that lack Black and Latino families. For example, High Technology High School in New Jersey is situated in a neighborhood that is only 0.5% Black and 3.5% Latino. The high school mirrors this dearth of diversity with just 2% Black and Latino students combined. On the other hand, there are instances where there’s a huge gap between the school population and nearby residents. Take Stanton College Preparatory School in Jacksonville, Florida. Nearly all of the residents in the surrounding area are Black, but only about a quarter of the high school’s student population mirror that. Stanton, a magnet school, no doubt draws from many surrounding communities to fill its seats. 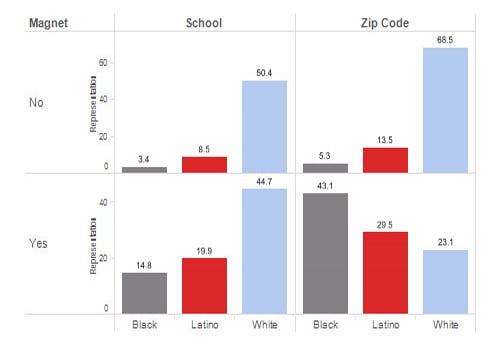 In some high schools, Black and Latino students are less likely to enroll or in AP courses. Even in high schools that might offer advanced courses, Black and Latino students are also less likely than White or Asian students to benefit from them. To find out if the same goes for these top-rated high schools, I first removed 13 schools with very low enrollments of Black (fewer than 40 students) and 9 with low Latino student enrollments. Then, at the remaining schools, I looked at Black and Latino participation rates in AP relative to White students. If you recall, AP and IB participation is one of the reasons why these high schools top the list. But within those schools, are students from all backgrounds benefitting from the access to rigorous academic coursework? In other words, how many students in these groups are enrolled in AP classes, and how many then go on to take the tests (which, if they do well, can often count as college credit)? Among the remaining schools, there was an average enrollment gap of 4 percentage points between Blacks and Whites, and 1 percentage point between Latinos and Whites (this smaller gap might be driven by Latino participation in the Spanish Language exam). Four of the schools had Black-White or Latino-White gaps that exceeded 5 percentage points; they are listed below. For example, at the Academy of Aerospace and Engineering, only 8% of Blacks and 3% of Hispanics are taking AP courses, while 15% of White students do so. Seven high schools had participation gaps larger than 5 percentage points (listed below). At BASIS Tucson North, over two-thirds of White students took all corresponding AP exams for their AP courses, whereas only two out of every five Black students did the same. At high schools like these, equitable access stops short of the culminating AP exam.

This quick exercise is just a snapshot of a bigger problem. Access to good—even baseline—academic preparation in this country remains elusive for many Black and Latino children. For example, the U.S. Department of Education’s Office of Civil Rights put Alabama’s Lee County School District on notice this past fall because the predominantly Black middle school did not offer Algebra, whereas the White middle school in the same district did. This disparity in access isn’t an isolated incident. The list goes on.
There is a reason why the Office of Civil Rights is collecting, analyzing, and policing these disparities in academic preparation. The results of resegregation, gerrymandering of public school attendance zones, and curricular tracking are preserving hierarchies and perpetuating inequalities that have deleterious effects for the academic outcomes of our Black and Latino students.
Academic resources provided by top high schools (like the ones that USNWR highlights) are great insofar as students are able to partake of them. Indeed, these resources are inextricably linked to gaining access to college. In the absence of colleges not being able to formally recognize some of these inequalities, now more than ever before, we need equitable access to rigorous academic preparation for Black and Latino students. Regardless of whether Black and Latino students attend a top high school, equitable access to academic preparation is their civil right.

Notes: Figures were grayed out for high schools that had less than 40 Black or Latino students in their high school. (a) USNWR lists this high school as a non-magnet, but CRDC data and the school website list the school as a magnet.
Sources: US News and World Report Best High Schools Rankings, 2014; Civil Rights Data Collection, 2011 Survey

Awilda Rodriguez is a research fellow for the Center on Higher Education Reform at the American Enterprise Institute.