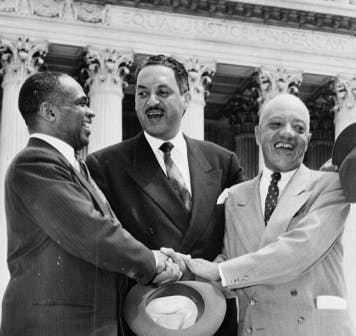 Six decades later, the promise of Brown, which envisioned high quality education for American children no matter their race or economic background, remains unfulfilled. In marking the decision’s sixtieth anniversary, scholars and social activists are bringing attention to what’s been described as the “mixed legacy” of Brown and are urging a renewed push for racial and economic equity in American education.

“Brown was a major accomplishment and we should rightfully be proud,” said Dr. Gary Orfield, the co-director of the UCLA-based Civil Rights Project, Thursday in a statement. “But a real celebration should also involve thinking seriously about why the country has turned away from the goal of Brown and accepted deepening polarization and inequality in our schools.”

In “Brown at 60: Great Progress, a Long Retreat and an Uncertain Future”, a report released Thursday by the UCLA-based Civil Rights Project, Orfield and his co-authors assess the progress that the nation has made in desegregating its schools. It paints an extensive picture of the segregation that has emerged for Latinos, whose school-age population has surpassed that of African-Americans to become the nation’s largest racial and ethnic minority group in K-12 education.

The report finds that in the nation’s two largest regions, the South and West, non-White students now make up the majority of the school-age population. Nationally, Black and Latino students are more likely to attend schools with a substantial majority of poor children, while White and Asian students typically attend middle class schools.

For Black students, the South has become the least segregated region of American K-12 schools. With Blacks experiencing more segregation in the Northeast and Midwest, more than half of Black students in New York, Illinois, Maryland and Michigan attend schools where 90 percent or more are minority, according to the new report. Desegregation progress proved substantial for Southern Blacks, says the report, and unfolded largely from the mid-1960s to the late l980s.

The report presents research which affirms that growth in Latino student segregation has coincided with the demographic surge in the Latino population. Segregation has grown substantially for Latino students in the West, where integration gains from the l960s have been overwhelmed by growing segregation since then, the report finds.

“It is time to stop celebrating a version of history that ignores our last quarter century of retreat and begin to make new history by finding ways to apply the vision of Brown in a transformed, multiracial society in another century,” Orfield said.

Dr. Amy Stuart Wells, a professor of sociology and education at Columbia University’s Teachers College, contends that the educational experiences of poor minority children remains unequal to that of middle class and upper middle Whites in American society.

Wells argues that scholars and policymakers are attached to antiquated ways of analyzing and thinking about desegregation.

“We really need to rethink the racial diversity…,” she continued. “There’s more Hispanic students than Black students in this country. The research paradigm around desegregation needs to shift.”

Wells also noted that with declining numbers of White children in the American population, the idea of desegregation denoting majority-White school districts balanced with racial minorities is becoming obsolete.

“We still talk about desegregation meaning majority-White [populations] in schools and that’s just not the reality of our country anymore,” she said.

For some scholars and social activists, dealing with the unfulfilled promise of Brown has meant combatting the emergence of problems such as the “School-to-Prison” pipeline. Dennis Parker, the director of the American Civil Liberties Union (ACLU) Racial Justice Program, said the post-Brown era has seen the persistence of racial discrimination and racially-biased social policies creating new barriers for Black and other non-White children.

“There are still too many barriers to opportunity for our children of color,” Parker noted Thursday during the “Brown at 60: Is Full Equality Within Our Grasp?” forum event in Washington. ”Everything that happens in the criminal justice system has a precursor in the educational system.

the assistant secretary for the Office of Civil Rights at the U.S. Department of Education, during the ACLU-sponsored event.