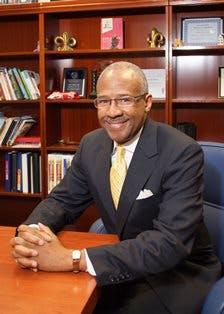 Dr. Walter Brown is a professor and executive director of the executive Ph.D. program in urban higher education at Jackson State.

Dr. Marcus Chanay, vice president for student life at Jackson State, entered the program in 2005, completed his dissertation and received his doctorate in 2007. The degree helped him secure a promotion to associate vice president in 2008 and his current position in 2011.

Garrett and Chanay are among the 152 graduates of the accelerated program, which focuses on issues faced by urban institutions of higher education. ­The faculty and staff are preparing to celebrate the program’s 10th anniversary, and, according to Dr. Walter Brown, a professor and executive director of the program, there is indeed much to celebrate—out of 50 to 60 applicants, there is an average enrollment of 23 students per year and a graduation rate of 70 percent within the two-year framework. ­The program is financially supported through the university budget from tuition and participatory fees paid by the students.

­The first cohort entered the program in September 2004 and graduated in 2006. ­The 10th cohort, which enrolled last September, is scheduled to graduate in August 2015.

“­The uniqueness of this program is that you have people from so many different backgrounds,” Chanay says. “Not all of them are from higher education … some are in nonprofits, public health, there have been some attorneys … and the strength of the program is that you also have [courses] in public policy administration, business and other areas.”

Brown says most of the program’s research addresses subjects such as retention of African-American students in higher education, administrative challenges, faculty concerns, STEM curricula, utilization of technology and “extensive research on HBCU development and fundraising.”

Brown also notes that the JSU program was modeled after the University of Pennsylvania executive Ed.D. program, which is described on its website as “the premier cohort-based Ed.D. program in the world” and one that “enables students to complete coursework and a dissertation in two years without career interruption.”

Chanay, who teaches a course on student affairs administration, also recruits prospective students. He says his main selling points are that the program was modeled after Penn’s highly regarded executive Ed.D. program and that “the cohort model is very supportive for those who are working while earning their degrees.”

The students typically are already involved in demanding careers and are taking several days a month from those positions to attend classes. Many fly in from other parts of the country. Brown was recruited in 2006 from George Washington University, where he was an assistant professor in the Department of Educational Leadership.

Brown acknowledges that the two-year cohort model is attractive but also has its pitfalls if students are not diligent.

“We want to convey to our students that, even though this is a two-year Ph.D. program, it’s as if it is a traditional program that takes five to seven years to complete,” he stresses. “So they have to be very focused and disciplined.”

After founding director Dr. Joseph Martin Stevenson left the university in 2008 to take another position, Brown, who was serving as interim director, was appointed to the permanent post in 2009 after a national search. Brown says the ePh.D. program, as it is dubbed, has been “tweaked to a certain extent” over the years. It was initially more multidisciplinary and has since become more focused on urban higher education.

However, it has remained true to its mission of developing scholars and practitioners with skill sets related to urban higher education and accomplishing it within a two-year framework.

For Garrett, the entire degree process was worth the effort she applied to it. Due to her own experiences, Garrett was eager to research her area of interest.

“I spent 12 years on the board of trustees of the State Institutions of Higher Learning in Mississippi, and I was one of only a couple of women during my entire time on the board,” Garrett says. “I wanted to know if women in other parts of the country at different types of institutions had the same kinds of experiences I had. And sure enough, it didn’t matter what types of institutions they governed, their race or age … they had similar difficulties dealing with all-male boards.”

Garrett adds that her research found that “the very things that make women good board members—like their willingness to do the homework, their relationship skills and consensus building skills—were the very things that created conflict with their male colleagues.” Garrett’s dissertation won a national award, and she has become an avid promoter of the program.

“The positive aspects that I try to emphasize are that it is nontraditional and the cohort system is very supportive … and [the] faculty [is] absolutely outstanding.”

The international component is also both attractive and demanding. In April, cohort 9 spent a week in Trinidad visiting higher education institutions. Other trips have included Mexico City, Vancouver and Paris.

Several current students attest to both the challenges and benefits of the program. The word “intense” is used often.

Melissa McCoy, who is in her first year as a member of cohort 10 and also has a full-time teaching job, asserts, “It’s all about prioritizing, so I eliminated a lot of things, such as my social life. Once I decided to complete the program, that’s what I had to do.”

Janue Johnson, a married mother of three from Oakland, Calif., is on track to graduate in August. With a mass communication degree from Cal State Long Beach and a master’s in education from the University of Phoenix, she is researching the difference between online and traditional course experience in graduate studies.

“When my children reached a certain age, I decided to apply to the program and it has been a challenge,” Johnson says. “But that challenge has developed certain disciplines in me and has affirmed to me what my abilities are, so the process has really helped me quite a bit.”

After earning her degree, Johnson plans to remain in higher education “directing or facilitating the use of technology to support student learning.”

As part of the 10th anniversary events, previous graduates have been invited to make presentations to the current students, and a culminating event will be held in the fall.

For Brown, the anniversary represents success on several levels.

“I feel really good about the direction of the program and the capabilities of the students,” he says. “It’s very gratifying to see a student come into the program with minimal knowledge about a certain area and how to convert that area into a researchable problem and, in the end, have an understanding of what research is all about and be immersed in some of the complex issues within higher education. That has been rather gratifying.”