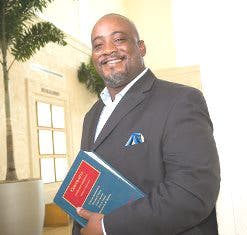 Desmond Meade is president of the Florida Rights Restoration Coalition, a group that fights for convicted felons to regain their civil rights after they finished serving their time.

WASHINGTON― When a delegation went to the White House recently to deliver a set of policy recommendations related to President Barack Obama’s “My Brother’s Keeper” initiative, one brother was kept out — ostensibly because of his background as an ex-offender.

Desmond Meade — whose story of personal redemption was widely shared on social media when he earned a law degree last month from Florida International University after having experienced homelessness, drug addiction and incarceration — told an audience at the Center for American Progress on Friday that the refusal came as an affront.

“I was slapped in the face with the harsh reality that even though my release was granted years ago, access is still denied to me by not being able to go to the White House,” said Meade, who is president of the Florida Rights Restoration Coalition, a group that fights for convicted felons to regain their civil rights after they finished serving their time.

“I can’t even pass the security clearance,” Meade said. “It’s indicative of the things that we as returning citizens or formerly incarcerated individuals face on a daily basis.”

Panelist Rev. Michael McBride, director of Urban Strategies and Lifelines to Healing Campaign at PICO, said the meeting was subsequently moved from the White House to a conference center on the White House grounds.

• Humanize youth of color through an “honest national discussion about racial equity” and to “examine the deleterious ways that American media and culture reinforce negative thoughts and stereotypes.”

• Accelerate the scaling up of gun violence prevention strategies that are “grounded in both policy and programs,” and create a “Race to the Top Gun Violence Prevention Initiative” funded with $500 million over five years in communities with higher than average homicide rates.

• Advance criminal justice and education system reforms to reduce the number of African-American and Latino youth who are being incarcerated.

McBride said the group used the opportunity to ask for a “face-to-face” meeting with formerly incarcerated individuals and the Obama administration — “and there was a commitment to do so.”

“In the recommendations, we said there needs to be a national robust and rigorous, nuanced conversation about implicit bias, race, and the way that it acts and forms our country,” McBride said.

Co-panelist John Powell, UC Berkeley professor of law and of African American studies and ethnic studies, and director of the Haas Institute for a Fair and Inclusive Society, said the most important issue is not whether to talk about race, but how to discuss race.

“And that’s more difficult because the grammar comes out of the ’50s and ’60s, and we talk about it largely in the context of Jim Crow, explicit animus based on color,” Powell said. “Something else is happing now, just as pernicious but more complicated.”

Powell noted how the called-for discussion on race comes at a time when research has shown a substantial amount of anxiety among Whites regarding the increasing diversity of the United States.

Consider, for instance, the following:

• A different Northwestern paper released this month found that “the increasing diversity of the nation may engender a widening partisan divide” as Whites, regardless of political affiliation, lean more Republican and endorse conservative policy positions more strongly.

• A survey released last month by the Public Religion Research Institute found that 11 percent of White Democrats and 18 percent of White Republicans agreed with the statement that “the idea of an America where most people are not White bothers me.”

Powell said when it comes to “My Brother’s Keeper,” success is contingent upon widening the “circle of human concern.”

“There are a lot who feel not only are brothers and sisters not their keeper, they’re not our brothers and sisters,” Powell said, citing research on unconscious race bias by Princeton psychology researcher Susan Fiske. “We deny that they’re connected to us in any real way.”

Powell linked Meade’s denial to the White House to the larger racial and structural issues in American society.

“If you see people as a threat, then you also push them away,” Powell said. “So how do we actually change the discourse, not just discourse, but the structures, how do we change so that we’re celebrating the accomplishments of someone and have a program to embrace them that we don’t turn them away from the White House?”