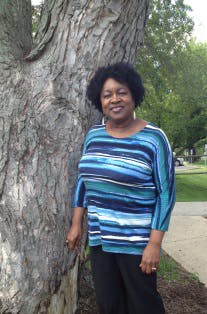 Dr. Joanne Gabbin of James Madison University, founder and director of the Furious Flower Poetry Center, says her group’s conference in September is the largest in the world devoted to African-American poets.

Serenaded by a single voice, two elderly women sat in wheelchairs on stage before a crowd at Virginia Tech University. As Lisa Winn sang “Still I Rise,” one of the women, Maya Angelou, reached out to catch hold of the hand of her companion, Toni Morrison.

The moment represented the culmination of many tumultuous years, not just for Angelou and Morrison, but the African-American community at large. The pair was being honored with the Furious Flower Poetry Center Lifetime Achievement Award at Virginia Tech on Oct. 16, 2012.

Thinking back on that moment, Dr. Joanne Gabbin of James Madison University, founder and director of the Furious Flower Poetry Center, says she is grateful that she had the “wisdom and foresight” to honor Angelou before her passing last month.

Angelou’s death shook the community, but also is a reminder that her powerful voice was one of many. Though she was arguably one of the greatest writers of the 20th century, her work has been taken up by a new generation.

The Furious Flower Poetry Center will host its third decennial conference to answer the question of what the future holds for Black poetic expression at James Madison University, Sept. 24-27. The conference, “Seeding the Future of African American Poetry,” will examine the future, as well as its global influence and reception, of African-American poetry.

Some 40 poets from across the United States, Africa, Europe and the Caribbean will visit JMU, in addition to hundreds of conference attendees. The conference will honor Rita Dove, Toi Derricotte, Michael Harper, Yusef Komunyakaa, Marilyn Nelson, Ishmael Reed and Quincy Troupe.

“It is the largest, and possibly the only, gathering solely devoted to African-American poets in the world.” said Gabbin.

Almost 20 years ago, the first conference grew out of an invitation Gabbin extended to Gwendolyn Brooks to give a reading at JMU. With a year and a half to prepare for Brooks’ visit, Gabbin arranged a large gathering of academics and African-American poets, anchored around Brooks’ dedicatory reading. The conference was held in 1994.

In naming the conference, Gabbin was inspired by a poetic conceit taken from a line in Brooks’ poem “The Second Sermon on the Warpland.” The “furious flower” represents the beauty of her poetry and the agitated spirit of the civil rights movement of which Brooks was a prominent voice. “You think about flowers being beautiful, you think about them as lovely and all that, but you don’t think furious. It’s a furious, rageful flower that has in it a voice of resistance as well as beauty.”

The conference was so successful that Gabbin decided to hold one every decade. Now that the tradition is in its third iteration, it promises to become a defining event for African-American poetry.

Gabbin says that the conferences highlight changes in the reception of African-American poetry over the decades.

“When I started teaching, African-American literature ― then called Black literature ― was totally marginalized. In fact, some American literature and English literature teachers wondered if it was even important. I had that said in the 1990s, when I did the first conference. Let me be very clear about this: The university [JMU] as a whole was very supportive. But there was some pushback in terms of whether this was important to do.”

By the time of the second conference in 2004, she says, the importance of the conference was not questioned.

JMU, says Gabbin, has helped her initiatives flourish by giving her a space and the funding for the Furious Flower Poetry Center.

While the conferences are high profile events, the Center works continuously to promote poetry. JMU dedicated a building on campus to the Center in 2004, which is the base of operations.

“Dr. Gabbin has been instrumental in involving the local community, through summer camps for young writers, involvement of students from local universities and colleges, by advancing the careers of emerging poets by providing them with audiences of over 1000, and by raising the visibility of African-American poetry outside of the academic context,” said Dr. Myra Sklarew, professor emerita of American University. Sklarew serves on the advisory board of the Furious Flower Poetry Center.

While the center has grown far beyond the initial invitation to Gwendolyn Brooks, Gabbin’s desire to share and inspire with spoken word remains the same.

Recalling the early decision to host the conference, Gabbin said, “My whole reason for doing this conference was to make sure that students who really wanted to know about this literature had a way of interacting with these poets. I think that’s a very important feature of higher education: exposing students not only to the literature, but, if the poets and writers are living, we should expose our students to them as well.”