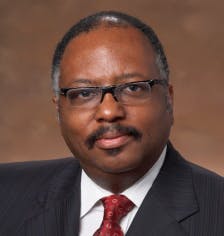 Michael T. Nettles, senior vice president of policy, evaluation and research at ETS, said that the symposium was the fourth in a series that began back in 2010.

WASHINGTON — Raised in a series of foster homes in Connecticut, Sixto Cancel beat all of the odds that were stacked against him.

The outspoken and inquisitive student, who has probably experienced more challenges than most adults twice his age, is now an honors student at Virginia Commonwealth University.

“I wasn’t raised by a mother or a father. It’s nonprofits and the government that raised me,” said Cancel, who shared his moving story with a packed audience that gathered at the National Press Club yesterday for the “Advancing Success for Black Men in College,” symposium sponsored by the Educational Testing Service (ETS) and the Children’s Defense Fund (CDF).

Cancel’s success is testament to his amazing will, as well as Connecticut’s well-designed foster care program. But far too many Black men between the ages of 18 to 24 continue to fall through the cracks in disproportionate numbers, forcing President Obama and seasoned educators to once again train a national spotlight on how best to address this vexing issue.

For Ronald Mason Jr., president of Southern University and A&M College System, the issue isn’t new. In fact, he’s been talking about the struggles that beset Black males for so long that the conversations sometimes seem “circular.”

“But in light of the dismal numbers – which continue to suggest that only 28 percent of Black men age 25 and older hold a postsecondary degree compared to 41 percent of men of all races age 25 and older- almost everyone agrees that challenges remain.”

And yesterday, high-profile thinkers added their voices to the discussion, pledging to help design specific outcomes that will help to produce more success stories like Sixto Cancel.

“The greatest security threat to this nation, the greatest economic security threat doesn’t come from any outside enemy,” said Marian Wright Edelman, the founder and president of the CDF. “It comes from our failure to invest in our children. All of them.”

Edelman and Dr. Michael T. Nettles, senior vice president of policy, evaluation and research at ETS, convened well-known education experts such as Drs. Bryant Marks of Morehouse College, Marybeth Gasman and Shaun Harper of University of Pennsylvania and Terrell Strayhorn of The Ohio State University to the National Press Club to tackle the problem.

In a series of back-to-back panels, the experts argued that too often young Black men are held back by a series of factors that are often beyond their control, such as poverty, poor school systems and chaotic family lives.

So how can more Black men enroll and make it through college? The experts pointed to the need for community-based programs and said that school support is essential to helping to ensure educational success. They praised programs such as GEAR Up, the Posse Foundation and Upward Bound for helping to point students on the path to educational success.

Still, the rising cost of a college education often deters students from low-income families from even applying to more selective private colleges. A 2013 Brookings Institute study described the phenomenon of “undermatching,” in which high-achieving, low-income students are more likely to enroll in colleges where they are overqualified for admission than high-achieving, high-income students.

Yet the “sticker shock” of institutions such as Boston College and Harvard University, where tuition and fees ran up to $45,622 and $42,292 respectively for undergraduates in the 2013-14 academic year, should not be taken at face value, cautioned the experts.

“Students are basing their college applications and their search processes on published tuition prices as opposed to net tuition prices,” said Vanessa Coca, a research assistant with the Research Alliance for New York Schools, an initiative housed at New York University. “Often these selective institutions have recently implemented no-loan or minimum-loan policies.”

Other panelists proposed more drastic measures. For example, Heather McGhee, president of Demos, a public policy organization, said that the government should take more responsibility for funding higher education. “We need to start getting to the fundamental root of the problem, which is that higher education is a public good and should be financed properly,” she said.

Nettles said that the symposium was the fourth in a series that began back in 2010. “I was pleased with it,” he said in an interview with Diverse. “The issue is really important.”