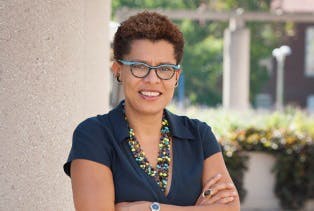 Rather than defend the practice of race-conscious affirmative action that helps underrepresented minorities gain admission into highly selective colleges and universities, Cashin instead pushes for affirmative action that’s based on structural disadvantage, or place, that a student has to overcome to attain a high-quality education.

Cashin’s new book, Place, Not Race: A New Vision of Opportunity in America, argues that place-based affirmative action provides a race-neutral approach for helping disadvantaged students as well as bringing diversity to elite colleges and universities.

Although the 5th U.S. Circuit Court of Appeals on July 15 upheld the use of race in college admissions in the Fisher v. Texas case, there’s not much optimism that race-conscious affirmative action has a long-term future in American higher education. Among those who are advocating for race-neutral alternatives to race-conscious admissions practices, Cashin in Place, Not Race offers a vision of how colleges and universities can achieve racial and ethnic diversity while providing opportunity for disadvantaged students regardless of their race or ethnicity.

“I believe in affirmative action. I just want it to be better and fairer. I want to insulate it from legal and political attack, but I also want to help strivers who really need the help,” Cashin told Diverse.

There’s little disagreement that the practice of race-conscious affirmative action has been on the decline since the 1990s, as the federal courts have limited its use and states have acted to prohibit public universities from considering race. Over nearly two decades, the proportion of four-year public colleges that consider race in admissions has fallen from more than 60 percent to about 35 percent. Just 45 percent of private colleges still consider race in admissions.

Cashin contends that race-conscious affirmative action is currently doing little to help the truly disadvantaged in American society. It benefits, she asserts, primarily highly advantaged Black and Latino students, such as her own children. In the book’s epilogue, which is in the form of a personal letter, the former Clinton administration official informs her twin 6-year-old sons that she believes they do not “need or deserve affirmative action” that will consider their race as a factor in college admissions.

“One irony is that race-based affirmative action, as it is practiced in highly selective institutions, really doesn’t help the vast majority of Black and Latino students in this country,” Cashin said recently in a public forum.

Many students, “as do most Black and Latino kids in this country, have to overcome serious structural disadvantage” to gain access to and complete college, Cashin explained. “[They] have to overcome serious structural disadvantage, including under-resourced schools with less-experienced teachers, fewer higher-achieving peers that raise expectations and model habits of success, and often exposure to violence,” she noted.

In addition to its failure to reach disadvantaged Black and Latino students, Cashin argues that race-based affirmative action poses too high a social cost because “it engenders [racial] resentment,” particularly among working-class Whites.

“White folks don’t like it. And it makes it more difficult to create coherent multiracial coalitions among the people who struggle in this country to support the public policies that will redress these serious savage structural barriers that most children of color face,” she said.

In the book, Cashin also makes clear the distinction between place-based and class-based forms of affirmative action. Place-based affirmative action in academic admissions seeks to move beyond the scope of class-based admission practices by taking into account the impact of racial history, such as the persistence of segregation in African-American communities. Cashin writes that “mere consideration of [family] income differences does not adequately reflect the structure of disadvantage in the United States.”

“It is not enough to promote affirmative action based upon class rather than race when there is a racialized, separate and unequal K-12 pipeline,” she writes.

The book’s publication, which coincided with the 60th anniversary of the landmark Brown v. Board public school desegregation decision, could not have come at a more opportune time. Since early May, Cashin has earned a place among those scholars and advocates who are driving the national debate over affirmative action. She’s made appearances on network TV news, national and local radio programs, a C-SPAN-covered forum and several public events.

In June, Cashin appeared as a guest at the release of The Future of Affirmative Action: New Paths to Higher Education Diversity after Fisher v. University of Texas, The Century Foundation book whose chapter authors include nationally prominent experts, such as Dr. Anthony Carnevale, Rutgers University-Newark chancellor Nancy Cantor and Vassar College president Catharine Hill.

In a review of Place, Not Race published in The New Republic magazine, Kahlenberg praised Cashin for “skillfully blending her personal story as an upper-middle-class Black professional with a wide range of research on what constitutes the biggest barriers to success. … Cashin provides a compelling blueprint for a new, much stronger, form of affirmative action based on actual disadvantage.”

Kahlenberg’s review takes note of the contrast between the affirmative action stance Justice Marshall took in the 1978 Bakke affirmative action decision and that of his former law clerk in her new book. “More than 30 years later, a former Supreme Court clerk to Justice Marshall, [Cashin] makes a powerful case that it’s time to rethink her former boss’s support for racial preferences,” he writes.

A month prior to the Century Foundation book release, Place, Not Race drew praise from Roger Clegg, a longtime opponent of race-conscious affirmative action and the president and general counsel of the Center for Equal Opportunity. During an event televised by C-SPAN at the Joint Center for Political and Economic Studies in Washington, D.C., he characterized Place, Not Race as “a courageous book” and that “it does take guts [for a liberal] to say that racial preferences are … no longer a good idea.”

Although Cashin’s colleague, Georgetown law professor Girardeau Spann, strongly defended the use of race-conscious affirmative action during the C-SPAN event, he urged viewers and audience members to read the book. Cashin explains that only in recent years has she arrived at a position to support place-based affirmative action over the race-based version. “I wouldn’t say there’s raging enthusiasm in the traditional civil rights community” about Place, Not Race, she said.

Some liberal critics have complained that Cashin neglects to carefully consider the position of “non-affluent” middle-class Black families. Writing in The American Prospect magazine, economist Richard Rothstein takes up the cause of African-Americans who are “sitting between the very poor and the rich.”

“These are children not of inherited wealth and status but of ordinary lawyers, engineers, administrative workers, civil servants, paraprofessionals, police, firemen, bus drivers, or blue-collar workers — children of men like Michelle Obama’s father, who worked in Chicago’s water plant,” he writes.

Rothstein concedes that Cashin’s proposals would likely see some middle class African-Americans benefiting from place-based affirmative action. However, with most middle-class Blacks not residing in predominantly Black neighborhoods, much of the African-American middle-class “will not benefit from place-based plans that Cashin supports — and they will be underrepresented without race-conscious affirmative action,” he writes.

Cashin recently fired back at Rothstein and North Carolina State University historian Blair L.M. Kelley, a left-leaning critic who wrote about Place, Not Race in TheRoot.com. Also writing in TheRoot.com, Cashin noted that roughly “30 percent of Black children live in a middle-class neighborhood, defined as one where more than half of residents are not considered poor.”

“Proximity to poverty is a common, lived experience for African-American families of varying incomes,” she writes. “But if universities were to follow my proposal … of giving special consideration to any high achiever who lives in a neighborhood or attends a school where 20 percent or more of their peers are poor, this would help the vast majority of Black and Latino children who currently suffer the disadvantages of segregation.”

In describing much of the early reaction to Place, Not Race, Cashin notes that she occupies a unique space on the affirmative action issue while being a member of the civil rights community. Her previous two books, The Agitator’s Daughter: A Memoir of Four Generations of One Extraordinary African-American Family and The Failures of Integration: How Race and Class are Undermining the American Dream, have emphasized her connection to the civil rights community.

“I’m part of this community. And my friends in the community are open to the argument,” Cashin said. “I think they appreciate where my heart is. They appreciate all of the analysis about the underlying systemic disadvantage.”