Lead Exposure Study to Focus on Black Women in Cincinnati 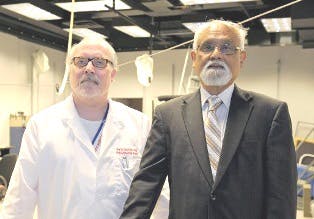 Dr. Kim Dietrich, left, and Dr. Amit Bhattacharya are investigating the effect of childhood lead exposure on bone and musculature health later in life in African-American women. (Photo courtesy of the University of Cincinnati)

With support from the National Institute for Environmental Health Sciences, University of Cincinnati researchers are launching a study of African-American women to determine whether childhood lead exposure has affected bone and muscle health as the women who will be studied have matured into their early-to-mid-30s.

Dr. Amit Bhattacharya, a professor of environmental health at the University of Cincinnati, said the UC research team will be testing the hypothesis of whether any detrimental changes in bone and muscular structures associated with early lead exposure could predispose African-American women collectively to higher risk of early osteoporosis compared to individuals with no or reduced lead exposure.

Bhattacharya told Diverse that one expected outcome will be the early detection of risk among women in the study for bone disease, such as osteoporosis. That will be possible because the research team will be using a new technology developed by Bhattacharya and Dr. Nelson Watts called Bone Shock Absorbance (BSA). The BSA technology uses sensors to measure how energy from strikes to certain bones is absorbed and dissipated through the musculoskeletal system.

“The most important thing about this project in terms of significance is that our patented new technology, which does not use radiation, will help identify those subjects who are at risk of developing bone fragility, meaning those who would be at risk of having an osteoporotic fracture later in life,” Bhattacharya said.

“So having that knowledge in advance—who is at risk of having a potential fracture due to osteoporosis early in life—there may be some lifestyle intervention that can be proposed or recommended by health care providers, such as nutritional changes or physical activity,” he noted.

As blood lead concentrations in the U.S. population have fallen since the banning of lead as a gasoline additive, lead sequestered in bone continues to be a source of internal exposure for millions of people, according to the UC researchers. Research has shown this is especially true for African-Americans and other urban-based minorities exposed to moderate to high levels of lead during their childhood years “by virtue of lead residues from paint in older and sometimes poorly maintained” homes.

Bhattacharya and Dietrich say the new study coincides with growing concerns Americans are having with the aging of the U.S. population. That focus on aging means that it’s timely for the Cincinnati Lead Study to assess the risks childhood lead exposure will have for older adults.