UTK’s Orange Hall will be renamed after Geier and White Hall after Robinson. 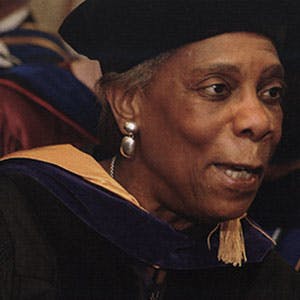 Robinson was the first Black undergraduate student admitted into UTK and one of three Black students to fully desegregate the school in 1961. Geier made news by taking to the courts in 1968 and fighting for equity and against segregated systems. This fight resulted in the 2001 Geier Consent Decree.

At first, Robinson’s application to UT was rejected. But he then threatened legal action against the school’s policy on race at the time.

“They brought the state attorney general in to the board meeting to ask him if he thought he could win such a lawsuit, and he informed them that given the way case law was being established across the South as it related to public higher education, that he did not think he could win this case,” Robinson said. “They discussed it further and said I met all the qualifications to be admitted except the one on race, so they voted to change the policy and I became the first African American student admitted to the undergraduate school.”

Geier graduated from Vanderbilt Law and worked at the U.S. Department of Justice, the Social Security Administration and the Appalachian Regional Commission before joining UT as associate to the chancellor and senior fellow at the Howard H. Baker Jr. Center for Public Policy.