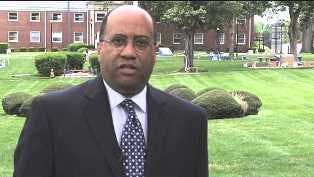 St. Augustine’s University Interim President Everett Ward said his priority “was to bring the university to financial stability.”
St. Augustine’s University is regrouping after a particularly difficult academic year. Some of the challenges the small historically Black university faced included a $3 million drop in net tuition revenue, the firing of its previous president and a federal investigation of allegations that the university provided false information on a federal grant proposal.

Just 100 days into his new job, Interim President Everett Ward announced a series of tough but proactive steps the university is taking to get back on the road to recovery, last Monday.

In an interview with Diverse, Ward harkened back to the three objectives he committed to on April 23, when he was hired.

“The first [objective] was to bring the university to financial stability, the second was to strengthen the faith in the administration with faculty, staff, students and alumni, [and] also to strengthen and enhance our relationship with external stakeholders,” he said.

Among other measures, the university eliminated 43 positions; instituted two weeklong furloughs, one in July and one for this December; placed a hiring freeze on adjunct professors for the 2014-15 school year; closed campus facilities; and moved some staff from a 12-month to 10-month schedule.

Ward said that faculty reactions to the furloughs and cuts were mixed. “Are we having some growing pains and adjustment pains? I think so. Because any time you look at faculty and staff reductions, and possible class mergers and closures, they’re always some underlying issues. But we are working with the faculty,” he said.

St. Augustine’s faculty will regain a measure of power — the Faculty Senate — that had been eliminated by a previous administration. Ward said that he reinstituted the Senate in his first two weeks of office. Now that school is in session, faculty will have the chance to choose their department representatives. “The faculty will meet in their respective colleges and departments and elect their representatives. During the month of October it should be functional with elected officers,” Ward said. “We are very pleased about that.”

In addition to streamlining St. Augustine’s $26 million budget, the administration has also worked to streamline its academic focuses to four “pillars.” The four general areas of concentration are public health, criminal justice, STEM subjects, and mass communications and journalism. The goal is to build on the strengths that St. Augustine’s already possesses. “St. Augustine’s is the only HBCU in North Carolina with a commercial radio station and television station,” Ward said.

Ward said that alumni, community stakeholders and the Episcopal Church have all stepped forward to support the university. St. Augustine’s will hold a new fall fundraiser on September 20.

If the enrollment goals are not met, St. Augustine’s will face additional budget cuts. The president may even teach a class in the spring, a prospect he said he would “welcome.” “We are committed as an administration to make certain that we stay within budget or under budget. Therefore, if we don’t meet our original budget line that was approved by our board of directors in June, then we will make the necessary adjustments to our budget in order to meet that desired outcome,” Ward said. “We are certainly not going to work to have our administration operating in the red.”

Shelley Willingham-Hinton, vice president of marketing and chief information officer, refers to the changes that St. Augustine’s has undergone as a “renaissance.”

“This is a very important time in the history of the institution,” she says. “Although we are definitely facing challenges, we are working through things to make sure that St. Augustine’s remains strong.”

Though St. Augustine’s has encountered financial difficulty, it is not unique in that regard. “It’s no secret that HBCUs have been hard hit by the changes to the Parent PLUS loan, and that has been especially hard on private HBCUs,” says Dr. Robert Terry Palmer, associate professor of student affairs at Binghamton University.

Nor are financial issues specific to HBCUs, according to Dr. Palmer. “When an HBCU closes, it receives so much attention. We have to be mindful that there are even predominantly White institutions that are in the same situation,” he says.

Palmer praises Ward for his aggressive response to a challenging situation. “It really does seem that the president is doing the things that need to be done, to save the institution and save it from closing,” he says.