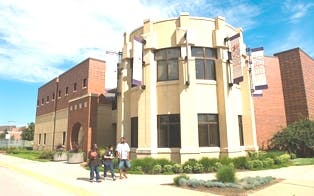 The Black Cultural Center at Purdue University is hailed as a “vibrant element of University life.”

Dr. Fred L. Hord felt isolated and frustrated in his first year as director of a Black culture center at West Virginia University because of the lack of networking among his peers in the state and region.

So at a meeting of the American Council on Education, Hord proposed creating a national network of Black culture centers, an idea that fellow directors embraced enthusiastically. Thus was born the Association for Black Culture Centers in 1987.

About 50 individuals representing two dozen schools attended its first conference at Knox College in Illinois, where Hord had relocated to run that school’s center. From that modest beginning, ABCC, as it is known, has grown to attract 200 to 550 participants to its annual conferences.

The criteria for membership were broad enough to include colleges in the Caribbean and West Africa, as well as American museums and community centers. Despite the “Black” in its name, ABCC has long included multicultural campus centers.

That expansion was made explicit this summer when ABCC’s website began to note that the organization “includes African American, Latino, Native American, & Asian Centers.” There are no plans to change the name, though, says Hord, ABCC’s executive director.

“I think we should be able to integrate through the Black experience, just like we’ve been integrating through other people’s experience,” says Hord, also chair of Africana Studies at Knox. “I think we ought to increasingly connect with Latinos, Native Americans, Asians and we need to increase involvement with progressive Whites.”

The shift toward greater multiculturalism follows a trend to redefine Black culture centers as multicultural on some campuses. Already, Hord says, just a slim majority of about 100 members—55 percent to 60 percent—are strictly Black centers.

Hord estimates there are about 140 Black and 100 multicultural centers on college campuses around the country.

Black cultural centers began after Black student protests in the late 1960s. The first was created at Rutgers University in 1967, followed by others at Knox College and the University of Iowa in 1968.

“Initially, they started off, in many cases, as safe houses,” where Black students could gather and feel comfortable on traditionally White campuses, says Dr. Rodney T. Cohen, current president of ABCC. “But also, parallel with that, students wanted this to spark a broader conversation around introducing the investigation of the Afro-American [experience] into the academics and intellectual conversation of the academy.”

Cohen, director of the Afro-American Cultural Center and an assistant dean at Yale University, says ABCC is moving to beef up the educational mission of Black culture centers so they do not become just “quasi-student centers, places where you eat pizza and play spades and dominoes.

“In terms of the preservation and legitimization of these centers, one of the things I’m pushing is that they become repositories of the African-American experience at the institution where they are housed,” Cohen explains.

Yale’s center is working with the archivist of the campus library to preserve artifacts, pictures and memorabilia and provide electronic access to those materials.

The Black Cultural Center at Purdue is described via its website as a “vibrant element of University life, offering a wealth of programs and services for the entire campus community.”