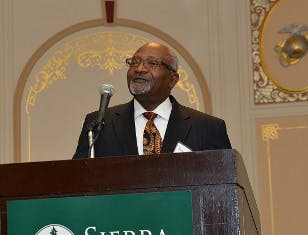 Sierra Club officials say the new award, named for Dr. Robert Bullard, pictured above, “will honor an individual or a group that has done outstanding work in the area of environmental justice.”

As a scholar, Dr. Robert Bullard is credited with being one of the founders of the environmental justice movement. In 2013, the influential Sierra Club bestowed upon Bullard its highly prestigious John Muir award. The award is considered to be one of the most significant for individuals who have attained achievement in national or international conservation causes.

Bullard’s “expertise and media savvy has garnered much needed attention and remedies for communities burdened with environmental hazards,” said Leslie Fields, director of the Sierra Club Environmental Justice and Community Partnerships program, when the award was made last year.

“I am very humbled by a gesture of this nature,” Bullard, who is dean of the Barbara Jordan-Mickey Leland School of Public Affairs at Texas Southern University, told Diverse.

“What it says to me is that … the naming of the award itself really honors the work and not just my work but the work of others who have really labored in the fields working on environmental justice, confronting environmental racism, and dealing with pollution and environmental degradation in communities that oftentimes don’t have resources to fight the battle alone,” he said.

Sierra Club officials say the new award “will honor an individual or a group that has done outstanding work in the area of environmental justice.” The inaugural award will be presented to Mississippi activist Rose Johnson.

“The Sierra Club has long recognized the rightness and necessity of environmental justice work, and we couldn’t be more proud of having Dr. Bullard’s name on our new award honoring those who have followed in his footsteps,” said Sierra Club president David Scott in a statement.

“The whole issue of environmental justice has been getting a lot of attention in recent years, and it’s very significant that the Sierra Club has chosen to” establish the Bullard award, said Ellen Davis, the Sierra Club awards committee chair, to Diverse.

“It really all came together this year because last year we gave Dr. Bullard our top award. … After that happened, the timing proved perfect to create this new award because we’re going to have support from the board of directors,” she said.

Bullard is the author of 18 books, including Dumping in Dixie: Race, Class, and Environmental Quality. Among his latest books is The Wrong Complexion for Protection: How the Government Response to Disaster Endangers African American Communities, which was published by the New York University Press in 2012. Bullard is a graduate of Alabama A&M University. He earned a master’s degree at Atlanta University and a Ph.D. in sociology from Iowa State University.

As a young sociology Ph.D. graduate, Bullard recalls that, in 1978 when he and his wife, Linda McKeever Bullard, got involved in a lawsuit to fight the siting of a landfill in a Houston neighborhood that was 82 percent Black, both environmental and civil rights groups declined to join the effort.

In researching the lawsuit, Bullard and his research team learned that Black neighborhoods in Houston were disproportionately chosen for the city’s solid waste sites, even though Blacks then made up just 25 percent of the city’s population. The study was the first to document environmental discrimination under the Civil Rights Act.