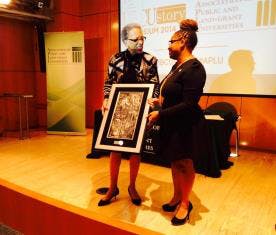 HBCUstory founder Dr. Crystal deGregory, right, presents Dr. Johnetta Cole with the HBCUstory Storyteller of the Year emerita award.A group of historians (and just plain storytellers) gathered in the nation’s capital over the weekend to discuss the past, present and future of historically Black colleges and universities in this country.

Meeting under the umbrella theme “Where do HBCUs Go From Here? Strategic Partnerships + Sustainable Futures,” scholars from across the country convened for the second annual HBCUstory Symposium, presenting research and case studies around the modern relevance of these institutions at the Association of Public Land-grant Universities headquarters in Washington, D.C. Oct. 24-25.

The inaugural symposium was held last year in Nashville to “offer rank-and-file members of the HBCU community as well as our allies, the opportunity to satisfy academia’s pressing demand to publish and present or perish,” said HBCUstory founder and executive editor Dr. Crystal A. deGregory.

Dr. John Lee, Jr., vice president in the office of access and success: advancement of public Black universities and minority-serving institutions for APLU, said partnering with HBCUstory for this year’s event helps APLU re-write “what it means to be a part of the HBCU community.”

For deGregory, the conference, which gave her an opportunity to present icons—such as Dr. Johnetta B. Cole and Dr. Ivory A. Toldson—with Storyteller Awards, presented a needed personal boost. In addition to being in the presence of her idols, deGregory was overwhelmed with emotion as she reflected on the months leading up to the symposium.

The months between April and October “have been among the most trying of my entire life,” she said. “Not because things couldn’t have been much worse, but because people can and will disappoint you.”

Upon receiving her M.Ed. degree in May, deGregory learned she’d have to return to her native Bahamas with the expiration of her student visa. She spent a month in her home land reflecting and building her resolve to take HBCUstory to the next level.

“Both personally and professionally, there have been many days when I’ve asked God: ‘Why?’”

“Why, she said, is “a fair question to ask. Unlike ‘why me,’” which she laughingly said she has also asked from time to time, ‘“why’ does not suppose that we should be exempt from hardships. Instead, “why” forces us on the lesson: What is it we could, and should be learning as we climb life’s mountains or walk in its valleys? I can tell you, in no uncertain terms, that I have learned to focus on the provider and not on the provision.”

After a finishing a fourth degree, her Master’s in Education from Tennessee State University, in May deGregory found herself on what she calls “a merry-go-round” of a place where she wanted to do so much more than the constraints of her professional situation would allow.

Bound by various external factors, she returned home to her native Bahamas to take some time to reflect and build her resolve to take HBCUstory to the next level. She spent over a month in her homeland “trying to give back” and further her commitment to her craft. But the symposium, which had already put out a call for papers and had speakers lined up, called her back to the states.

In the absence of job security and in the midst of challenges in her personal life, deGregory found a way to press back and devote all of her efforts to the success of the symposium.

That provision, for the moment, was the 2014 HBCUstory symposium, the realization of what deGregory calls her “boldest dream” and one that fills a necessary void for the community.

“As a national convening on HBCU research and culture, it is the first and only meeting of its kind; it has met and is meeting a much and long overdue need,” said deGregory.

Lee agreed that this type of convening is necessary to promote HBCU scholarship in across contested landscape, one in which HBCUs—and those they serve—are often left defending their relevance in the broader community.

“Sharing our successes through innovation and research is essential for thriving in a competitive marketplace,” Lee said

HBCUstory will continue to emphasize the importance of making sure these stories are told. The stories of the nation’s 105 HBCUs, stories that, not unlike deGregory’s own story, convey themes of resilience and overcoming what seems insurmountable obstacles.