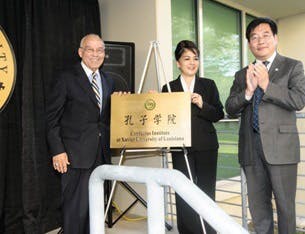 In 2012, Chinese language education got a significant boost at Xavier University of Louisiana when the New Orleans-based school launched the nation’s first Confucius Institute based at a historically Black college or university. It was also the first of the nearly 500 Chinese government-affiliated Confucius Institutes around the world to be established in Louisiana.

Since then, the Xavier branch has not only coordinated the expansion of Chinese culture and language instruction at that campus but it has enabled Mandarin language courses to be offered at seven K-12 schools in the New Orleans area.

Late last month, officials announced that Xavier University has been designated as the lead institution of the 100,000 Strong Foundation’s “Advance Louisiana – Educating a Globally-Competent Workforce” initiative. The initiative, which has been endorsed by the Louisiana state K-12 superintendent, is being directed by the Washington-based 100,000 Strong Foundation (100K Strong) to accomplish three objectives aimed at boosting the capacity of Louisiana residents to understand and communicate with Chinese language and culture.

The objectives are expanding Mandarin teaching in Louisiana primary and secondary schools, community colleges and Historically Black Colleges and Universities; facilitating and enhancing study abroad in China for those students in Louisiana who participate in Mandarin instruction; and improving cultural understanding of owners and employees in businesses throughout Louisiana, particularly among those working  in the tourism industry.

“We are committed to preparing a Louisiana 21st century workforce that is culturally competent and to training the next-generation of political, business, and civic leaders with a global perspective,” Xavier University president Norman Francis said in a statement, noting that the school’s two-year experience with a Confucius Institute puts it “in a unique position to serve as the lead institute for the Advance Louisiana initiative.”

Carola McGiffert, president of the 100,000 Strong Foundation that seeks to strengthen U.S.-China relations through Mandarin language learning and study abroad, said Louisiana is the first state the organization has selected for a statewide learning initiative.

“While it is important to have 100,000 Strong based in Washington and Beijing, given our deep ties with both governments, the 100K Strong movement is national in scope. For it to succeed over time and for students across the country to gain the necessary China skills for them to succeed in the 21st century, it must be anchored in the states,” she stated in an email to Diverse.

Founded in January 2013 by then-Secretary of State Hillary Clinton, the 100,000 Strong Foundation is an independent, bipartisan nonprofit organization based at the American University in Washington.

Although a few U.S. universities have faced pressure to close Confucius Institutes due to academic freedom controversies, Xavier officials along with Louisiana education and 100K Strong authorities praise the institute for its flexibility in potentially scaling language instruction widely across the state. Typically, an individual institute represents a partnership between a host institution such as Xavier, Hebei University, and the Confucius Institute Headquarters in China.

Officials have touted the growing trade between Louisiana and China as a basis for expanding educational and cultural ties. Since 2000, Louisiana has experienced steady growth in exports to China with the state now ranking fourth in the nation, behind California, Washington and Texas, according to U.S. Census Bureau statistics. In 2013, the U.S. Department of Commerce reported that Louisiana’s exports to China totaled $8 billion—or roughly 12.6 percent of the state’s total exports. The $8 billion in exports contrasts favorably with 2013 Louisiana imports from China totaling just over $1 billion.