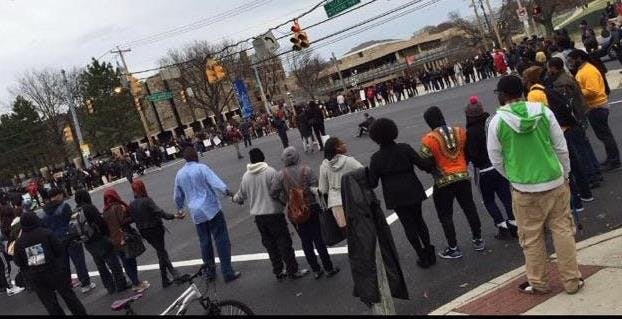 Protesters shut down an intersection near Morgan State University in Baltimore on Tuesday.

As the nation is digesting a Missouri grand jury’s decision not to indict Ferguson police officer Darren Wilson, a man who admitted to shooting and killing a Black teen, Michael Brown, Aug. 9, many took to the streets and to social media to express their dismay at the decision.

“It’s hard being Black. It is a heavy experience. From the time we are born and start watching cartoons we are bombarded with subliminal images telling us we aren’t good or good enough,” said Ashley Brooks, a senior at Florida Memorial University, via Twitter, lamenting the self-loathing engrained in some people of color from an early age. “It’s taught to us. You know how stressful it is to hate yourself and not know you’re hating yourself?

Brooks went on, “Meanwhile, in African-American History, the only class that caters to you, you’re learning about lynchings from the ’30s that sound extremely similar to the Trayvons and Mike Browns even though there’s decades between the incident? … And the schools suck and they only talk about Black people for 28 days out the entire year and it’s the same 6 or 7 every time.”

Brooks’ sentiments are not unlike those of many around the country ― and around higher education, which is a microcosm of the society in which we live.

Dr. Bryant Marks, an associate professor of psychology at Morehouse College and director of the Morehouse Male Initiative, said that he was “disappointed, but not surprised” by the decision, announced late Monday night.

“It just seems like, from the beginning, it was almost pre-determined [the decision] would work out in the officer’s favor,” Marks said. But despite the fact that he expected the ruling to go the way it did, knowing it was coming did not diminish the defeated feeling that has settled in.

“As a Black man, it made me feel as though my life is not as valuable … a Black man’s life is not worth taking steps to have a trial to uncover as much truth as possible” in the case, he said.

Marks, whose Morehouse College is the only institution dedicated to the education of African-American males in the country, said students on campus expressed many of the same sentiments he did. For the Black women at the neighboring institutions, he said, they were hurt because Mike Brown could have easily been their brothers, their fathers, their future husbands and sons.

Dr. Donna Ford, a professor in the Peabody College of Education at Vanderbilt University, agreed. She “was by no means surprised by the verdict,” she said. “Yet, I am very upset and troubled. We’ve been here before — Emmett Till, Rodney King, Trayvon Martin, Mike Brown and others whose story and death/murder did not make such headlines.”

“I toss and turn every night wondering whose life as a Black male will be lost next,” Ford said. “A close relative? A friend? A colleague? A stranger? … How many more lives will be lost at the hands of the ‘law’ before the justice system is about justice? How many more Black males must die by trained professionals who are supposed to serve all — regardless of race, gender, and class? When will Black males feel safe in schools, colleges, communities and the larger society?”

Expressing concern for both her 3-year-old Black grandson and 35-year-old son, whom Ford said she worries about daily, she continued, “Profiling facing Black males is not just professional for me … it is also personal. When will justice be served? When will the lives of Black males be valued?”

Rallies were held on campuses and in cities across the country to protest the decision not to indict. Marks said that in the Atlanta University Center alone — which house Morehouse College, Spelman College and Clark Atlanta University — there were two separate rallies held Tuesday as students processed their emotions. A group of 150 to 200 students marched from campus to downtown Atlanta to join others in their grief. In Washington, D.C., Howard University students gathered at the White House after the decision was announced Monday night, calling on President Obama to appear, to stand with them in solidarity.

As many people continue to look for answers, Ford suggests that education has a role to play in the healing process.

“There is so much work needed in the justice system, but also higher education and P-12 settings,” Ford said. “As Martin Luther King, Jr. stated … ‘We must learn to live together as brothers (sisters) or die and perish together as fools.’ No one wins… we all lose with racism.”