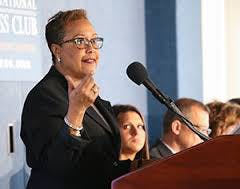 Sharon P. Robinson, president and CEO of the American Association of Colleges for Teacher Education, said they are “meticulously reviewing” the new regulations.

“In their current form, these proposed regulations have the potential to halt or even reverse the hard-won progress of current teacher preparation program reform efforts,” said Sharon P. Robinson, president and CEO of the American Association of Colleges for Teacher Education, or AACTE, in a statement Wednesday.

“We are deeply concerned about the proposed regulations for the approximately 25,000 teacher preparation programs across this nation,” Robinson said.

She said the rules not only highlight the Obama administration’s intent to create a federal ratings system for higher education, but that they could also “turn back the clock on innovation and reform in educator preparation.”

“Given the potentially wide-ranging implications, we are meticulously reviewing the details of the proposed regulations in their current form and working with our members and our partners to ascertain the effects on the field should they be implemented,” Robinson said of the regulations, which—at more than 500 pages—are the size of a novel.

In a telephone conference earlier this week to discuss the basics of the proposed regulations, U.S. Secretary of Education Arne Duncan said the proposed rules—which would tie eligibility for a certain federal student aid for teacher preparation programs to measures such as job placement rates for graduates and various learning outcomes for the K-12 students their graduates teach—are meant to “build on and support” existing state efforts to bring about greater transparency, accountability, and program improvement.

“I want to be clear about why this is so important,” Duncan said. “Nothing in a school matters so much as the quality of the teaching that our students receive.

Among other things, the proposed teacher prep regulations would:

The TEACH grant program is currently funded at about $100 million per year, the U.S. Department of Education said.

Part of the Education Department’s rationale for tying TEACH grant eligibility to teacher preparation program performance stems from what the department deems as weaknesses in the current evaluation framework. Those weaknesses include loose definitions of what constitutes “high quality,” according to a review of the proposed regulations.

“The Department seeks to define ‘high-quality teacher preparation program’ in part because, of the 38 programs identified by States as ‘low- performing’ or ‘at-risk,’ 22 programs were based in IHEs participating in the TEACH Grant program,” one passage in the proposed regulations states.

The department noted further that approximately 75 percent of participating TEACH students will not complete the required service obligation.

“The Department intends to limit TEACH Grants to students enrolled in teacher preparation programs deemed by States to be of ‘effective’ quality or higher in part because we believe that a larger percentage of TEACH Grant recipients will be able to fulfill their service obligations if they have been prepared by strong teacher preparation programs that: (1) provide to prospective teachers the knowledge and skills necessary to succeed in the classroom; and (2) have high placement and retention rates,” the proposed regulations state.

Under a timeline sketched Tuesday by U.S. Under Secretary of Education Ted Mitchell, the final regulations—once adopted—would be published in September 2015. States would then have a year to get stakeholders involved and design systems of accountability and to collect data.

States would be required to make report cards publicly available in April 2018 on a pilot basis, and then required to rate programs using the new measures in 2019.

“The earliest possible impact on TEACH grants eligibility would be July 2020 for the 2020-21 academic year,” Mitchell said.

Though concerns have been raised about using test scores to judge teacher effectiveness, Mitchell said it would be up to states to decide to what extent test scores would factor into teacher preparation program evaluation.

“The regulations do not demand that states rate teacher preparation programs on the basis of how well students complete standardized tests,” Mitchell said. Rather, he said, the important thing is for states to measure student learning outcomes based on multiple measures.

Due to the voluminous nature of the regulations, most organizations with an interest in the regulations said Wednesday only that they planned to review the proposed regulations in the coming days and planned to offer comments solicited by the Education Department during a 60-day period following their publication in the Federal Register.

However, the organizations also alluded to reforms they say were already underway.

“For years, states have taken the lead on transforming teacher preparation, and we will continue to do so as State Chiefs review and submit comments on the regulations,” said Carissa Miller, deputy executive director of the Council of Chief State School Officers.

“We have already seen significant progress in the past two years as at least 45 states have adopted new preparation standards for teachers, revised the requirements teachers must meet to enter the profession, or implemented other key policy changes,” she explained.

Deborah Koolbeck, director of Government Relations at the American Association of Colleges for Teacher Education, or AACTE, said the proposed regulations would be costly to implement and burdensome on teacher preparation programs, which would be required to track graduates no matter where they work and to survey principals about how satisfied they are with hires from their programs.

She characterized the proposed regulations as “federal overreach.” Koolbeck also said teacher regulations may lead programs to not place graduates in struggling schools for fear that students in those schools may not make adequate gains. Or, she said, if a teacher leaves the school or the profession due to the work climate, it could reflect poorly on the teacher prep program, even though the circumstances of the graduate’s departure were beyond the program’s control.

Takirra Winfield, a spokesperson for Teach for America, said the organization, which continues to review the proposed regulations, believes that limiting the number of evaluation measures and “making them meaningful, rather than a laundry list, can be helpful to measure the quality of teacher preparation programs.”

“In so doing, measures such as GPA and test scores can be combined with other factors such as demonstrated leadership skills, strong verbal and written communication skills, and a demonstrated commitment to serving in underserved local educational agencies,” Winfield said. “We believe the final rules should reflect goals we all want to achieve, including increasing the diversity and breadth of the talent pool from which districts and school leaders may select their faculty.”