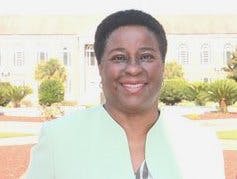 Dr. Jackie Robinson says she prefers to use interactive, cutting-edge techniques instead of a traditional lecture-based format in the classroom. (Photo courtesy of FAMU)

Dr. Jackie C. Robinson’s path toward a career in psychology began as early as high school. Robinson was one of three African-Americans to integrate a public school in her small town of Malone, Florida.

“It was very difficult—there were death threats; there was ostracism and racist comments on a daily basis,” says Robinson, who entered Malone High School as an eighth-grader in 1965 from the all-Black Union Grove High School in Greenwood, Florida.

“The Black teachers and administrators at Union Grove were my role models,” says Robinson. “However, my parents were integrationists and that influenced the decision to attend Malone when the opportunity presented itself.”

While prejudices in the South were re-occurring for Robinson, the coping mechanisms she used to combat racism have worked to her advantage.

“Those experiences, in some ways, shaped my profession, my desire to be a change agent and my desire to help the community,” she says.

The summer after graduating high school, Robinson participated in a training program that allowed students to work with mentally disabled individuals. While she was exposed to several disciplines, including medicine, social work and education, psychology impressed her most.

“I liked the idea of being able to help and heal through talk therapy—it fit well with my personality,” she says.

Since 2003, Robinson has been making strides in higher education as a full-time professor and mental health advocate at Florida Agricultural & Mechanical University (FAMU).

In the classroom, Robinson says she chooses to use interactive, cutting-edge techniques instead of a traditional lecture-based format. In honor of her innovative work, she was presented with FAMU’s 2014 Senior Faculty Teaching Innovation Award.

Robinson says she attributes her ability to excel in the classroom to years of clinical practice. She has spent decades of her professional life in the public school system, mental health clinics, psychiatric hospitals and private practice. She has worked with individuals suffering from anxiety and depression to those pleading insanity in the criminal justice system.

Beyond financial gain, Robinson says she has found value in using her skill-set to service the community.

“My thinking is, it doesn’t do the community much good for me to have years of experience and knowledge and not be willing or able to share that knowledge with the community,” she says.

For a decade, Robinson has worked with graduate students in FAMU’s community psychology master’s program, supervising interns and organizing volunteer opportunities for students to demonstrate skills associated with emotional wellness.

Continuing her mental health advocacy on campus, in July 2014 she was approved to establish the Center for Ethnic Psychological Research and Application (CEPRA) at FAMU.

The center’s components include research collaboration to assess community needs, educating the public on issues involving mental health and training students to work with underserved populations.

In September 2014, Robinson responded to a call from the St. Louis Chapter of the Association of Black Psychologists seeking professionals to facilitate wellness workshops for residents of the Canfield Green apartment complex in Ferguson, Missouri.

A memorial with flowers and stuffed animals for Mike Brown, the unarmed Black teenager who was shot and killed by police officer Darren Wilson there on Aug. 9, served as a backdrop to the outdoor workshops.

Wellness workshops for youth were provided by volunteers and administered through music, art, yoga and holistic methods. Robinson participated in teaching adults coping skills for themselves and their children.

“One lady said that she had difficulty sleeping; another said she’s startled every time she hears a loud noise because it reminds her of hearing the gunshot when (Brown) was killed,” says Robinson. “Children had problems sleeping and (were) concern(ed) for their parents who might be demonstrating.”

During both group sessions and one-on-one interactions, Robinson continued to present methods for emotional health and wellness. While planting a seed may take time to grow and make a difference, she is hopeful that she made an impact.

“It wasn’t an easy journey, but I was delighted that I was able to go and try and make some small difference in the situation.”