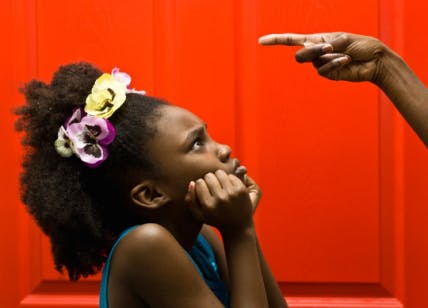 Back in the days when a Black child ran afoul of his or her parents or elders, the child might be asked to go retrieve a “switch”—a thin branch from a tree or a bush—in order for the adult disciplinarian to use to beat the child as punishment for a particular infraction. “That’s some hell of a psychology, right, to make you go get a switch to beat your own ass with, right?” the legendary comic Richard Pryor observed once in his famous 1979 “Live in Concert.” These days, the “switch” may be largely a thing of the past, but it’s been replaced by a new form of punishment that is just as unnerving—if not more—than being asked to retrieve a tree branch that one knows will be used to inflict pain on one’s own hide. Instead of asking misbehaving children to retrieve a switch, a small but growing number of Black parents are retrieving video cameras in order to record themselves whipping their children, then posting videos of the whippings on social media websites, such as Facebook, to embarrass their children to get them to discontinue any non-desirous behavior. In the cases of boys, the parents were often upset over their sons’ involvement in gangs or similar criminal activity. In the cases of girls, the parents were typically upset over their daughters being sexually promiscuous or representing themselves as being older than they actually were. Consider, for instance, the titles of the following videos, which can be found easily online:

The practice of posting videos of child beatings online is so disquieting for some Black scholars that some declined to comment for this article. And those who did speak did so hesitantly out of concern that highlighting cases in which Black children were purposefully beaten on camera might perpetuate false notions that Black parents are more violent than parents of other ethnicities when it comes to the disciplining of their children. That’s a valid concern when you consider the fact that these videos—often just a few minutes or less—are generating millions of views online and thus saturating large segments of American society. All of the Black scholars contacted for this article condemned the practice of combining corporal punishment and social media as counterproductive. They also urged Black parents to try to find alternative means of disciplining their children. “I oppose the practice,” said Dorothy E. Roberts, a professor of law and sociology at the University of Pennsylvania. “I think they’re humiliating their children and I don’t think it’s going to help,” Roberts said. “If anything it’s going to make the children resentful. I think that humiliating children can be as painful as the physical harm.” Carletta N. Perry, Assistant Professor of Psychology at Saint Leo University, said putting discipline methods on social media can increase negative attention-seeking behavior. “This is the opposite of what parents want,” Perry said. “They want their children to stop whatever negative behavior they are involved in, but sharing the discipline on social media is not the way. “Embarrassment may be one of the goals to stop the behavior, but, in fact, this type of behavior is an embarrassment to the family, the culture, and society,” Perry said. It’s also legally perilous. In several cases parents were arrested for the beatings that were captured on videos and posted online. Both Roberts and Perry suggested that the practice of putting child beatings online appears to be indicative of parental frustration. They sought to make it clear that they did not want to bash the parents. They also sought to broaden the context in which the videotaped beatings took place. “I don’t just condemn these parents,” Roberts said. “I also condemn the situations that they and their children find themselves in.” “As a psychologist, I have worked with parents who struggle to keep their children out of dangerous situations and in line on a day-to-day basis due to outside influences,” Perry said. “Unfortunately, I have also seen parents cry out for help to the police, to the courts, and to the community but many times their cry is unheard, unanswered and they feel alone in parenting during difficult situations.” One important thing to understand about some of the cases in which Black parents beat their children and then post videos of the beating online is that some of the children’s misbehavior was perpetrated online. You might think of it as parents going to the playground where they were misbehaving and beating their children in public—only now the “playground” is the Internet. Girls, for instance, may have been caught flirting with boys or older men online, and so their parents meted out the punishment in the same venue. Boys, on the other hand, may have bragged about gang involvement on their Facebook pages, and so their fathers or uncles post videos online of them beating the boys and forcing them to renounce their gang ties publicly. Roberts questioned the premise of whether the practice of parents putting child beatings online is actually confined to Black parents and urged a reporter to search for cases in which parents of other ethnicities had done the same thing. While it’s difficult to collect and assess all cases of videotaped child beatings, a recent unscientific web search turned up one apparent distinction between cases of White parents and Black parents where videos surfaced of them beating their children online. That is, in several cases where White parents had been videotaped beating their children, the video recordings were unintentional or surreptitious. That is to say, the White parents had simply been caught beating their children on video. Black parents, on the other hand, had put the videotaped beatings online on purpose. And sometimes they defiantly expressed blatant disregard for the legal repercussions or ramifications of doing so. For instance, a Flint, Michigan mother who—along with her mother—made a video of them beating her 11-year-old son for claiming to be a “gangster” and not doing his school work actually looked into the videocamera and defiantly and daringly said: “Please call CPS (child protective services) if you want to. Watch this ass-whooping this ‘gangster’ gonna get.” The boy is made to apologize to his mother, asked about his grades in school and made to tell the people on Facebook: “it’s not cool to be a gangster.” Illustrating how corporal punishment has been a longstanding institution within the family, the boy’s grandmother tells the boy she would “do just like my mama …. Walk and then come back and whoop your ass some more if I feel like it, you understand?” Perry—without speaking directly to the aforementioned case—said it’s important to “speak life into your children and tell them who they are, where they come from and where they are capable of going in their bright future.” “And, always speak with love in your heart and never in angry moments,” Perry said. “Remember to pause before you speak because your actions and your words are the lessons they will remember.”