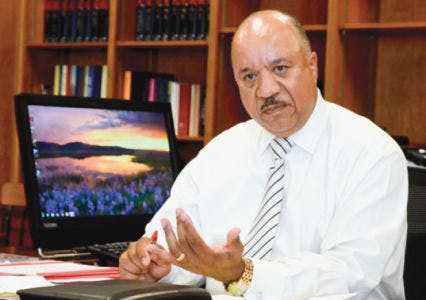 South Carolina State President Thomas J. Elzey says the dialogue sparked is “very negative and is affecting the confidence of our faculty, students, staff and alumni as well as potential donors and corporate entities.”Amid a frenzy of media reports and predictions of doom, South Carolina State University President Thomas J. Elzey expressed confidence Wednesday that the institution would remain open and that a state legislative subcommittee’s proposal to close it for two academic years “will not see the light of day.”

But within hours, the state’s Legislative Black Caucus asked Elzey to resign, saying he has proved he can’t lead the school past its fiscal woes. Its chairman, Rep. Carl Anderson, says the 39 caucus members were devastated by the closure idea and will work to kill it. But he says the proposal itself did a lot of damage to the school’s ability to move forward.

Elzey responded with a brief but firm written statement: “I will not resign. Another presidential turnover at this stage would be detrimental to the University as it relates to our SACSCOC accreditation. It is obvious and unfortunate that our lawmakers have placed politics ahead of the best interest of the students of this great institution.”

In an interview with Diverse Wednesday, Elzey explained that the proviso by a four-member panel must be approved by the several entities in the House and Senate before going to Gov. Nikki Haley.

“It’s way down in the system in terms of the process,” Elzey said. “We’re very confident—and I heard from the highest ranking members of the Senate—that it will not see the light of day and will not result in shutting the university down. But it has started a dialogue that is very negative and is affecting the confidence of our faculty, students, staff and alumni as well as potential donors and corporate entities.”

On Tuesday, the state House Ways and Means Subcommittee on Higher Education voted 3 to 1 in favor of a budget proposal that would shut down S.C. State beginning July 1, 2015 and reopen it to students in fall 2017. The plan also called for the hiatus to allow the university’s bills to be paid in full and students with at least a 2.5 GPA could attend another school within the state.

Also under the proposal, Elzey, who took office amid controversy in June 2013, would be terminated along with the board of trustees, staff and faculty. A panel would be convened to reorganize the institution.

Lewis Berry, of Gaithersburg, Md., who served as S.C. State’s national alumni association president from 1998-2000, and has served on the SCSU Foundation board, has closely watched the university’s travails for decades. He attributes many of the problems to the board of trustees and the state legislature which elects most of the trustees.

“There have been other overtures and attempts over the years by the legislature to close South Carolina State or make it a branch of one of the majority institutions,” Berry told Diverse. “It’s very disheartening.”

As for the legislative Black Caucus calling for Elzey’s resignation after he has served 20 months, “I think they’re just piling on right now. … I think it is unwise and would just be another nail in the coffin. Part of the problem is the revolving door of presidents; I don’t believe we’ve had five bad presidents in a row … but the last five or six have left under adverse circumstances. It’s not always the presidents—sometimes you have to look at the board.”

In his short tenure, Elzey has attempted to right a ship that appeared nearly sunk when he arrived at the HBCU from The Citadel, where he was executive vice president for finance. From infrastructure to classrooms, the problems were mounting—resulting in enrollment decline, accreditation warnings and less revenue.

The subcommittee’s proviso—with its resulting publicity and a student rally against it—was the latest round in South Carolina State’s years of struggle with legislators.

Last April Diverse reported that state lawmakers approved a $6 million loan to keep the university afloat for the rest of the school year, “but how it continues to operate after that remains questionable.” Elzey had requested more than $13 million to pay bills that had accumulated over previous months.

Elzey acknowledged that the university has to take more steps toward stability, but he pointed to numerous efforts his administration has made and some that he has proposed but have not been approved by the university’s board of trustees.

“We have reduced part-time positions, closed a satellite campus … had a hiring freeze,” he said, adding that some additional plans “are still on the table” such as eliminating some athletic programs and making full-time faculty cuts. He also said a faculty committee is recommending suspension or elimination of some academic courses with low enrollment.

Elzey also pointed to improvements and advances that the university is making that are not being recognized. For example, he noted its highly rated nuclear engineering bachelor’s program and its new advanced cybersecurity teaching lab, which recently received a $2 million federal grant.

“The university is on the right track to stabilizing our finances, but we need resources in order to be able to make strategic investments to improve the quality of our programs and enhance our programs so they are competitive. We play a major role in educating the citizens of this state, minority students and as an economic engine in this region,” he said. “We just don’t think this [closure proposal] is a good way to address the fiscal concerns of this university.”

Ways and Means Subcommittee Chairman James Merrill was not available for comment, but his assistant said the matter was scheduled for additional discussion late Wednesday. Merrill told local media Tuesday that the plan might be successful because of the level of frustration lawmakers have about the university’s fiscal affairs.