Tisdale Works to Keep Claflin University at the Top 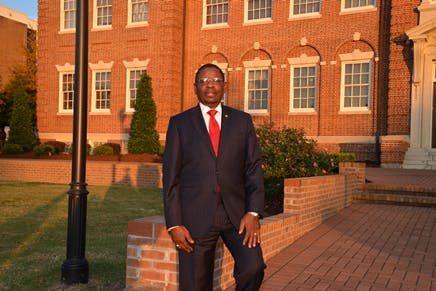 “One of the things I told the board when I interviewed for the position [was], ‘If you bring me back, please know [that] I will be about change,’” says Tisdale, who graduated from South Carolina’s oldest historically Black college and university in 1965 with a degree in mathematics. “I told them that I was not returning to maintain the status quo, but that I will be about change.”

Tisdale took the position in 1994 and quickly embarked on an ambitious undertaking to transform Cla­flin into a premier liberal arts institution in the Southeastern region of the United States.

But the same board that offered him the position was initially skeptical when Tisdale presented its members with his vision after his first year on the job. Tisdale’s plan for his beloved Cla­flin called for the need to raise academic standards, refurbish the campus and ensure that all of its programs were nationally accredited, while actively competing against other institutions across South Carolina—and indeed the nation—for the best of the best.

“That vision at that moment was surprising to some,” says Tisdale, as he sits at the head of a conference table in his office decorated with accolades.

“Honestly, there were some board members who questioned whether that vision might be too elitist and raised the question, ‘Are we trying to become elitist? What’s wrong with being good? Can we embarrass ourselves by being this out there? Do we have to reach so high?’”

When the back and forth ended, Tisdale had won the solid support of his board members, who embraced his new vision and committed themselves to working to transform Cla­flin into an HBCU success story.

“That day was a defining moment of my presidency because I know today that, if we had left that discussion and the board had said, ‘President Tisdale, you’re on the mark. You just need to go and redo your work,’ I would not be here today,” he says. “My ace in the hole has always been my board of trustees.”

At a time when many HBCU presidents have been caught in a power struggle with their boards, Tisdale has successfully escaped these battle royals and secured his space as one of the longest-serving HBCU presidents in the country.

On his watch, the university successfully enrolled a 13-year-old prodigy from Columbia, South Carolina, who was being courted by Harvard University and made national headlines last year when Emmanuel Pressley, a Claflin senior, beat out other students across the state to become South Carolina’s only Harry S. Truman Scholar.

Pressley, who is from Hemingway, South Carolina, and was the first African-American male valedictorian at his high school, was lured to Claflin as part of Tisdale’s campaign.

“We recruited one-on-one wherever they were. We go into the rural areas. We don’t just go into Columbia or Greenville,” Tisdale says. “We just decided we would not concede and that we would not sit back until the crème of the crop was taken.”

One of his most successful initiatives was the creation of the Honors College, which his wife now directs. Today, more than 15 percent of the school are honor students and have ambitions of continuing their education once they graduate.

Tisdale has not lost sight of the role that HBCUs have historically served, by educating students with potential who graduated from high school not fully prepared for college.

Devin Randolph, assistant vice president for student development and services and director of residential life, was one of those students when he was provisionally accepted into Claflin in 2003 after finishing high school with a 2.3 grade point average.

“I was thankful just to get out of high school,” Randolph remembers. “I had no aspiration of going to college and no aspiration of being great. But after I got to Claflin and met Dr. Tisdale, I changed my trajectory.”

Four years later, Randolph graduated in the top 10 percent of his class and, after working for several years as an admissions counselor, earned a master’s degree in public administration and social policy at Cornell University. He returned to Claflin in 2012 as a participant in the rebirth of the university under Tisdale’s leadership.

“I wanted to be part of his legacy and part of his greatness,” says Randolph, who adds that Tisdale has become a father figure to many African-American males. “His vision is contagious.”

Growing up amid racial segregation, Tisdale’s personal story is nothing short of extraordinary. When he graduated valedictorian from a small high school in the rural farming town of Kingstree, South Carolina, he did not have many options. Once he stepped foot on campus, though, Tisdale knew that Claflin was the place for him.

The day after he graduated from Claflin, Tisdale boarded a train north to Philadelphia to enroll in graduate school at Temple University and to teach middle school. He was confident that he was leaving South Carolina behind for good.

After receiving a master’s degree in teaching mathematics and working for four years as a school teacher, he landed a teaching job at Delaware State University (DSU) — but knew that he would have to earn a Ph.D. if he had any chance of remaining in higher education.

When he enrolled in a Ph.D. program in mathematics in 1972, Tisdale was the only African-American in the entire graduate school, but received a rare opportunity to serve as a teaching assistant to Dr. John George Kemeny, a mathematician who also served as president of Dartmouth from 1970 to 1981.

When Tisdale graduated from Dartmouth, he had already made up in his mind that he needed to return to DSU.

“My call was to go back to one of the historically Black colleges, and, since Delaware State University had been very supportive to me, I elected to go back,” he says.

Tisdale’s career took off at DSU. He quickly caught the attention of his superiors, including the college president, who, in 1985, recommended him for the American Council on Education (ACE) fellowship program that was created to groom individuals to become college leaders.

“I was not thinking [that] I would be a college president,” Tisdale says. “In fact, I was not even thinking college administrator.

I loved teaching and, honestly, I was at Delaware State and I was doing what I thought I was supposed to be doing in terms of my teaching and research.”

But after his yearlong fellowship ended, Tisdale returned to DSU—not as a faculty member, but as an administrator.

“Suddenly, I had been convinced that I wanted to be in administration and I thought [that] it was a thing I wanted to do,” he says with a laugh.

By the time Tisdale arrived to Claflin, he inherited an aging campus that was in need of renovation. The faculty and staff—several of whom he remembered from his days at the school—were getting older and he was anxious to bring in new energy.

“We were underresourced to a great extent,” he says. He went to work upgrading the academic programs and helping to build student enrollment. When he arrived, there were about 900 students and today there are approximately 1,900. The university recently launched three degree programs online.

In 2013, Claflin’s alumni-giving rate of 52.2 percent landed the school first for alumni contributions among HBCUs in U.S. News & World Report.

Tisdale says that he alone isn’t responsible for the school’s progress.

“Teamwork from day one,” he says, with a grin. “I believe that, when we achieve success, there will be enough that everyone can get a piece of it.”