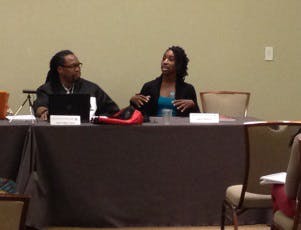 Kevin O’Neal Cokley of University of Texas at Austin and Tiearea J. Robinson of California State University, Dominguez Hills lead a panel titled “Do We Want to Be Well? Approaches to African-Centered Healings and Well-being” at the National Council for Black Studies.

LOS ANGELES — At a time when some universities have publicly questioned the value of Black Studies departments and programs, the presence of hundreds of scholars at this year’s National Council for Black Studies conference is a strong sign that the academic field is indeed growing and thriving.

“I see how many young scholars believe in the field and who are doing important research in spite of the criticism and the attacks,” said Dr. Valerie Grim, the chair of the Department of African American and African Diaspora Studies at Indiana University.

Grim has been attending NCBS conferences for the past 25 years and said that she’s encouraged by the research that her colleagues across the country are engaged in. “This gathering means that there is an intellectual space and an interest in exploring the lives of Black people around the world as subjects and not as imagined beings.”

Black Studies faculty and graduate students will present their interdisciplinary scholarship on topics ranging from the recent police shooting of Michael Brown—the unarmed 18-year-old Black man in Ferguson, Missouri—to a focus on the writers of the Harlem Renaissance.

Each year, newly-minted Ph.D.s and graduate students trek to the annual three-day conference to mingle with such veteran scholars in the field as Drs. Gerald Horne, Molefi Kete Asante, Karin Stanford and Maulana Karenga.

That kind of networking has become all the more important, particularly to faculty teaching at predominantly White institutions where Black Studies programs and departments are often undervalued and under-resourced.

Founded in 1975—a decade after Black Studies programs took off on college campuses across the country—NCBS sought to become the intellectual arm of the Civil Rights Movement and actively pushed to formalize the study of the African diaspora and expand its presence across the academic landscape.

By most accounts, they were successful. Their early work helped to establish Black Studies programs on campuses across the United States.

At an early morning panel on Thursday, several scholars engaged in a spirited roundtable discussion centered on the politics of navigating and negotiating the tenure and promotion process.

Dr. Terry Kershaw, a professor in the Department of Africana Studies at the University of Cincinnati, said that it’s critical for tenure-track faculty to understand the culture of their institution and the expectations for achieving tenure.

“You need to be asking yourself, ‘What is it my department and college look for in the tenure process?’” said Kershaw, who added that tenure-track faculty should have a mentor in their department and at the college who can help them navigate the process.

Dr. Charles Jones, a pioneer in the field, who was the founding chair of the Department of African American Studies at Georgia State University and now is on the faculty at the University of Cincinnati, said that tenure and promotion committees “want to see a steady stream of research” that goes beyond the dissertation.

Dr. Amilcar Shabazz, a professor in the W.E.B. Du Bois Department of Afro-American Studies at UMASS Amherst, said that tenure-track faculty members have to develop a strong relationship with the chair of their department.

“The chair is critical,” said Shabazz. “They can help you navigate your way through the process and they can defend and fight for you.”

Grim said that new faculty who have joint appointments between Black Studies and another department such as history or English should request a Memorandum of Understanding from the institution outlining the tenure expectations for research, teaching and service for both academic units.

“It’s about understanding the politics,” said Grim, who worries that Black Studies faculty—many of whom hold joint appointments—are often disadvantaged by the ambiguity of the process. “You want to be clear who is in charge of your tenure and promotion.”

These kinds of discussions are particularly interesting to graduate students who attend the conference, like Leon Bates, who is relatively new to academe.

An electrician for thirty years, Bates, 55, closed his business in 2009 when the economy began to tank and headed back to college to acquire an undergraduate degree in history. He enrolled in Indiana University-Purdue University Indianapolis (IUPUI) and finished in three and a half years.

One of his professors at the time was a member of NCBS and encouraged Bates to attend the annual conferences and ultimately helped him to redirect his focus toward Black Studies.

Now, he is enrolled in the master’s program in Pan-African Studies at the University of Louisville and has aspirations of enrolling in a doctoral program in Black Studies.

“For me, I’ve decided to leave the door open,” he said, noting that he’s not sure if he wants to become a faculty member or use his new skill-set in another occupation. “I’ve learned how to do research and I don’t mind it at all.”

Jamal Eric Watson can be reached at jwatson1@diverseeducation.com. You can follow him on twitter @jamalericwatson. He will be covering the National Council of Black Studies Conference through Saturday.