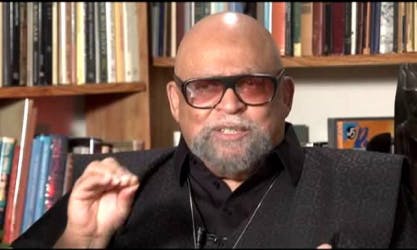 Dr. Maulana Karenga recently led efforts to fight off an attempt at California State University, Long Beach to strip the Africana Studies Department of its departmental status and replace it as a program.LOS ANGELES — Timed to coincide with the annual conference of the National Council of Black Studies, members of the California Legislative Black Caucus held a public hearing to express their support for Africana/Black studies departments across the state.

The hearing, which took place at the California African American Art Museum on Friday, was convened in the wake of numerous attacks in recent years against Black studies in particular, and ethnic studies in general, at public institutions across the Golden State.

“We know better than anyone else how important it is to have culture on campus,” said Assembly member Reginald Jones Sawyer, who chairs the state’s 12-person Black Caucus. “We’ve had deep discussions about ethnic studies programs on our campuses and we are very concerned.”

The concerns that many Black studies faculty raised at the two-hour hearing are not all that different from the ongoing battles currently being waged around ethnic studies in other parts of the country.

“Africana Studies has not made a hire in 13 years,” said Dr. Charles Toombs, who chairs the Africana Studies Department at San Diego State University. “We really need to have funding to hire people to do the work.”

Toombs said that one of the biggest misnomers is that anyone can teach Black studies and said that, even though many Black studies programs may not have the robust numbers of majors as some other academic disciplines such as English and history, its courses are often cross-listed and they generally provide a service to the overall campus community by offering courses that can be taken for general education credit.

In recent years, more institutions have sought to hire Black studies faculty into joint appointments, a pattern that has sometimes been criticized by supporters.

“We need autonomy,” Toombs told the Black legislators, which included Dr. Shirley N. Weber, who taught for 40 years at San Diego State and was president of the National Council of Black Studies (NCBS) before she was elected to the state legislature where she now serves as chair of the budget committee.

At California State University, Long Beach, a proposal that sought to strip the Africana Studies Department of its departmental status and replace it as a program was halted recently after students, alumni and faculty — led by Dr. Maulana Karenga, the longtime chair of the department and creator of the holiday Kwanzaa — voiced opposition.

Their protests ultimately prompted CSU Chancellor Timothy White to call for a statewide moratorium on any changes to ethnic studies until a systemwide review of ethnic studies programs was conducted by a task force comprised of college presidents, administrators, and ethnic studies faculty and students.

Karenga told the Black legislators that White “has shown a lot of outreach” and the establishment of the task force is a step in the right direction, but that more has to be done to invest in Black studies throughout the Cal State system, including providing tenure-track lines to replace the number of Black studies faculty who have retired in recent years.

Dr. Vincent Stewart, vice chancellor of governmental affairs for California Community Colleges, said that among its two-year colleges — the largest system in the United States — 13 schools across the state currently offer an associate degree in Black studies, while 18 community colleges offer courses in Black studies.

Stewart said that this week the system will announce a Memorandum of Understanding with 7 Historically Black Colleges and Universities, in an effort to develop a pipeline for students who want to continue on to earn their bachelor’s degree.

Last year, UCLA — which has one of the state’s oldest Black studies program — was granted departmental status after a long fight that included some of its most prominent faculty like Dr. Robin D.G. Kelley, a well-known historian.

NCBS officials said that they plan to hold similar hearings in the future to coincide with their annual meeting.