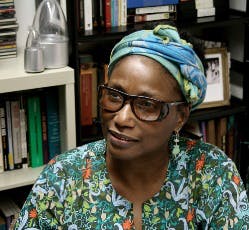 Michele Wallace says it’s impossible to predict what responses Black Macho and the Myth of the Superwoman might evoke this time around.

a kind of feminist superstar back in 1979—and it made her a target of scorn—in some households, neighborhoods and vaunted civil rights organizations.

That year, her signature tome, Black Macho and the Myth of the Superwoman, was “largely demonized. It was put in the same category as Alice Walker’s ­The Color Purple and For Colored Girls Who Have Considered Suicide … which is a device for dismissing those books for being ‘man-hating,’” says Beverly Guy-Sheftall, founding director of the Women’s Research and Resource Center at Spelman College and an Emory University women’s studies professor.

“Mostly,” says Guy-Sheftall, whom Wallace calls a friend and mentor, “it was Black people doing the demonizing.”

It was, Guy-Sheftall adds, an unmerited attack on Wallace, whose book is being released again in June 2015. Despite its naysayers, Black Macho was lauded by several prominent Black and non-Black feminists, including pioneers Audre Lord and Gloria Steinem.

On the road to her current post as a City College of New York and the Graduate Center of the City University of New York (CUNY Graduate Center) professor of English, women’s studies, film studies and Africana studies, Wallace also taught at Rutgers and Cornell universities.

­The slated re-release of Black Macho is likely to be fodder for more public speaking and, friends and fans of Wallace suggest, a chance to rekindle talk of progress made and work still to do regarding relations between Black women and Black men.

“­The general spirit of the book and many of [the] things she said then are still true and still very important. ­They’re excellent entry points into Black feminism today,” says New York City-based culture critic and journalist Jamilah Lemieux, 30, whom Wallace asked to pen a foreword for the upcoming edition of Black Macho.

“She articulated in a clear way how we are expected to do the labor of anti-sexist work and liberation work without being acknowledged for it,” continues Lemieux, whose father was a member of the Black Panther Party and whose male leadership Black Macho critiqued. “She articulated this idea that if we worked to ‘free Black men’ … we also would be liberated. We took it for granted that these men would care about our specific concerns as women.”

Indeed, there are Black men who do care and who function as full, fairly equal partners to Black women, Wallace says. But it’s difficult to ignore some opposite realities: Some Black male / Black female frictions do get played out on, say, reality lifestyle TV shows and reality courtroom shows; those frictions may also be reflected off-screen among everyday people.

Rates of marriage have declined among all races. But the decline has been sharpest among Blacks. And while Black men who do marry mainly choose Black wives, Black men also wed women outside their race at twice the rate at which Black women choose non-Black husbands.

As for her personal biography, 63-year-old Wallace notes that she is childless and divorced. The marriage she entered at age 37 dissolved about a decade later. Being unmated and not mothering was not part of her initial plan.

“I’ve accepted the way things are, which is being a dark-skinned, educated woman now of a certain age. … I’ve since accepted being in the slow lane. But when you are young and beautiful and smart, not meeting the kind of man who desires you is a hard pill to swallow,” says Wallace. “Especially when all of that seems to make no sense,” she adds.

The dark skin / light skin divide, to some degree, still exists, she says. Many of her mainly female students also desire to marry and mother. They are concerned about their place and power in societies where women have made advances but also, depending on where they reside, face gender-driven constraints of varying degree.

“The world is full of ignorance,” Wallace says. “And it’s not just African-American men who [can be] ignorant about what it is they should be thinking and doing in a relationship. Those things are even truer of men in other cultures who see women purely as instrumental and useful to performing services for them. The women have children, they raise children, they serve men sexually. … If you go to the Middle East and Africa, the Caribbean … you will find more of that than you find even in the U.S.”

Wallace aims to deeply investigate those and other facts and suppositions in the classroom and at public venues. In that way, she hopes to help pinpoint places where change is possible.

It’s an approach that serves students well, says City College of New York English professor Ahalya Bodasing, who once was a student of Wallace’s and her teaching assistant for a class devoted to Nobel Laureate Toni Morrison.

“Michele is this vivacious personality, this intrinsically interested, artsy, outspoken woman who takes some of the most complex questions but delivers answers in this matter-of-fact, acute way,” Bodasing says. “The energy and commitment to the topics of African-American identity, of exploring oneself and one’s understanding of identity—she has never relented from that. … She wants to go back into history and take us forward into where our lives are now.”

Says Ira Dworkin, a Texas A&M University English professor whose CUNY Graduate Center doctoral dissertation Wallace supervised: “As a mentor, Michele taught me how to read and how to see. She is, in so many ways, the best reader I have ever known. As a researcher, that process has shaped how I work in ways that draw on the intersections of traditional academic disciplines in a manner that is always and necessarily historically informed. And I think that aspect of her own intellectual work is visible in Black Macho.”

Not that Black Macho’s initial critics did not have their disagreements with what the book posited. Among others, sociologist Robert Staples, now a University of California, San Francisco professor emeritus, took issue and published a counter-essay, “The Myth of Black Macho: A Response to Angry Black Feminists,” in the March/ April 1979 issue of The Black Scholar. He faulted Wallace for not including potentially opposing viewpoints from Black men.

Wallace says it’s impossible to predict what responses Black Macho might evoke this time around. But she is glad about the re-release.

“I find that many of today’s younger women are just as concerned about the lack of regard that [some of] their contemporaries have for them. … They are concerned about the violence against them and the racism. They have to keep in mind that they must protect themselves and hold themselves in high esteem. It’s as much a challenge for them as it was for me when I wrote Black Macho,” says Wallace, who also authored Black Popular Culture, Dark Designs and Visual Culture and Invisibility Blues: From Pop to Theory.

Guy-Sheftall says, “It’s important for this generation of young people to know something of the history of Black feminist thought and the ways in which Black feminists spoke out and were courageous, even as people like Michele experienced a huge amount of pushback.

“… Hopefully, this new release of [Black Macho] gets the book to have a whole new group of people reading it.”