In U.S., Black Men Still in Fight for Citizenship

This past weekend, the city of Baltimore became a protesting ground. The message was the same as it has been around the country in recent months: Black lives matter.

Twenty-five-year-old Freddie Gray, a Black Baltimore resident, died April 19 after suffering a severe spinal cord injury during an arrest one week earlier. An ongoing investigation into the incident has identified several missteps by the police in the handling of the case.

But for many Baltimore residents, like many around the country, the acknowledgement is not enough. There has been little accountability for these incidents, and seemingly every week, there is a new report of another Black man dying at the hands of those sent to protect and serve. 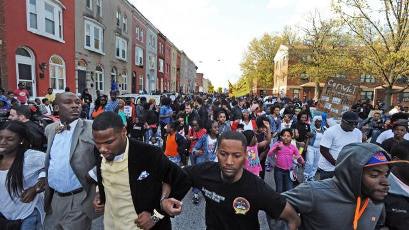 “There has been a long and tortured history where Black men, especially Black men, have been feared and targeted,” said Dr. Lonnie Bunch, founding director of the National Museum of African American History and Culture during a panel Saturday at the National Museum of the American Indian in Washington, D.C. “There have also been moments in our history when such pain, such profound pain has led to moments of change. This may be one such opportunity.”

The African American History and Culture museum is slated to open in the fall of 2016, but Bunch said the museum staff has a responsibility to have educational conversations about things that directly impact the history and culture of African-Americans even in the absence of a physical building. As such, the museum hosted the “History, Rebellion and Reconciliation” symposium Saturday at the neighboring National Museum of the American Indian to get the conversation going.

“This violence, this loss of life, is not just an issue in the African-American community,” said Bunch, who added that the open season on Black men in this country presents a problem for the American Indian and Hispanic communities as well because it reflects an intrinsic problem with the fabric of this country.

“This happened in Ferguson or Baltimore, but it’s a national issue,” he added.

The present-day “replication” of what was a painful and tumultuous history for Blacks, specifically Black men, in America is playing out in cities across the nation.

“Consider that Ferguson happened not far from where Dred Scott brought his initial claim to assert his claims to citizenship,” said Lisa A. Crooms, associate dean of academic affairs at the Howard University School of Law. The court in that case went to great lengths to prove he was not only not a citizen of the United States but not a person, she said.

“What was supposed to happen between Dred Scott and now … (was) moving property to persons … and from persons to citizens. That is a transition that we have not fully made” for African-Americans in this country,” she added. “We’re in the midst of another contestation as it pertains to citizenship.”

And that battle, said Crooms, has nothing to do with the country’s borders or immigration; it is a battle involving people who were born within the borders of the United States, people for whom citizenship is a birthright.

Opal Tometi, co-founder of the activist movement Black Lives Matter, said, “The escalation that we’re seeing … across the country is a result of the criminalization of being Black.”

“People (are) being put on trial for their own murder,” Tometi said. “That’s the culture we’re dealing with.”

“It can and is happening everywhere,” said the Rev. Dr. F. Willis Johnson, pastor of the Wellspring Church in Ferguson, Mo., of the increasing prevalence of the incidents. “We cannot try to build communities or spaces that we think are going to be … exempt.”

“All of us are desperately hopeful that it stops or it gets better,” Johnson added. But so far, it hasn’t happened.

Bunch said the problem will not go away until the nation gets serious about “trying to make sure that we get the kind of leadership that will help move us down the road.”

And that leadership is about more than just skin color; having a Black president or a Black attorney general has not made a difference to this point, said Crooms.

“The race of the attorney general or the president, it doesn’t change the fundamental flaw the country was built upon,” Crooms said. “With all respect to the president, he has come from the same elite institutions that have” traditionally been the strongholds of power in this country.

“If you take an old building and you change the window dressing, it’s still the same old building,” she added, challenging the panel to consider that the race of the leader does not necessarily change the elitist mindset from which he governs.