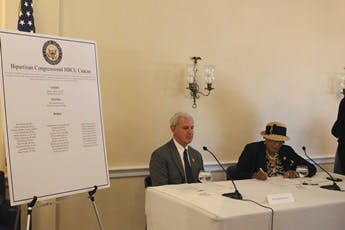 Representatives from both sides of the aisle came together Tuesday evening in the Rayburn House Office building on Capitol Hill to announce the formation of the Bipartisan Congressional Historically Black Colleges and Universities (HBCU) Caucus.

“Education should be important to all of us, and it is not a partisan issue,” said Rep. Alma Adams (D-N.C.), the first-term Congresswoman whose idea it was to launch the caucus. Adams co-chairs the new caucus with Rep. Bradley Byrne (R-Ala.), who said he is “honored” that Adams reached across the aisle to ask him to join her in the efforts to bring greater advocacy for HBCUs to the Hill.

“HBCUs deal with many of the same challenges as other higher education institutions, but they also face unique obstacles that demand special attention,” Byrne said. Byrne talked about the changing workforce and the growing need for HBCUs to continue to train those who would go on to build jets, serve as doctors in hospitals and contribute to the population of engineers in his home state of Alabama and across the nation.

The caucus, which stands separate from the Congressional Black Caucus (though there are some overlapping members), aims to do four things: start a national dialogue around importance, value and urgent need to support HBCUs; educate members of Congress and their staff about pressing HBCU issues in order to enact policy that will have a positive effect on HBCUs; promote legislation, including funding legislation, to better support HBCUs and support students and graduates of the institutions from a national level.

“These institutions are in need of our leadership right now at a federal level,” said Adams. “We want to make sure that the larger community understands the importance of these schools and the plight that they go through.”

Rep. Jim Clyburn (D-S.C.) agreed. “We are having some real challenging times,” he said, “because I think that what tends to happen is that people tend to sit down in little offices and come up with formulae that may sound good and may even look good but when it is applied to various backgrounds and experiences and various interests, they don’t work well.”

Specifically, Clyburn and his counterparts mentioned policies such as the college scorecard and Parent PLUS loan changes that have adversely affected the HBCU community and, on a state level, the systematic, historic underfunding of HBCUs across the country.

“Nobody can tell me it’s accidental,” Clyburn said of the funding inequities that particularly land-grant institutions have faced. “There are people who seek to close each and every last one of (the nation’s HBCUs). And I’m not telling you what I think. … I have been asked to support these efforts.”

Rep. G.K. Butterfield (D-N.C.), chair of the Congressional Black Caucus, agreed. “If we sit down (on this issue), we will witness the diminution, or the elimination, if you will, of HBCUs in this country,” Butterfield said.

Adams, who served as a professor and administrator at Bennett College for over 40 years and who graduated from North Carolina A&T State University, said a key priority will be directing funds back to HBCUs through congressional appropriations.

“We’ve got to bring the resources back,” she said. “You don’t have access if you don’t have the check to go along with it.”

“We keep investing in the historically Black colleges and universities (because) it’s good for them, but much more importantly, it’s good for our country,” said Minority Whip Rep. Steny Hoyer (D-Md.). Hoyer applied to be admitted to the caucus’ roster on the spot, making the total number of representatives in the group 38.