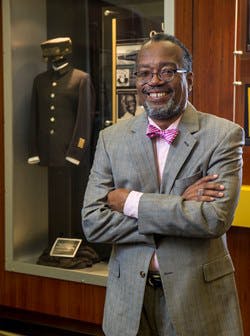 Dr. Derryn Moten of took the opportunity to “show the nexus between the Civil War and the Civil Rights movement.” (Photo courtesy of Alabama State University)Monday, April 27, was a state holiday in Alabama, Georgia and Mississippi, requiring the closing of state government buildings and offices.

The Confederate Memorial Day, as it is known in those states, commemorates the surrender of Confederate Gen. Joseph Johnston and his army on April 26, 1865 and is observed on the last Monday in April. Several other southern states pay homage to the Old Confederacy on other days and in various ways. For example, Robert E. Lee’s birthday is a state holiday in Alabama, Arkansas, Georgia and Mississippi, and it is sometimes combined with the federal Martin Luther King Jr. holiday because Lee was born on January 19, 1807.

For state-supported institutions of higher education, Confederate Memorial Day was largely ignored, and the campuses were open as usual despite the state holiday. For historically Black public institutions, the fact that state offices were closed in honor of Confederate heroes held significance, particularly for history scholars and academicians.

At Alabama State University, one professor decided to use part of the day to discuss the meaning of the commemoration in the context of the Civil Rights movement and today’s racial climate.

Dr. Derryn Moten, acting chair of the history department, told Diverse, “This was the first time we’ve ever held a conference on the Confederate Memorial Day—the legal state holiday. One of the things I wanted to do was to show the nexus between the Civil War and the Civil Rights movement.”

Moten says he is interested in making sure the accurate stories of the Confederacy and Civil War are told. “The South lost the war, and the history of war is usually told from the vantage point of the victor not the vanquished, but the South was singleminded that it was going to tell its own story about the Civil War.”

In the news release issued by Alabama State announcing the event, Moten says he organized the symposium because “We want to explore, examine and critique the Confederacy from as wide a field of perspectives and genres as possible. … I feel African-American scholars are regarded as interlopers if they critique the Civil War as anything but The Lost Cause or The War of Northern Aggression.”

At Jackson State University, the largest HBCU in Mississippi, Dr. Robert Luckett, director of the Margaret Walker Alexander Center, says celebration of Confederate Memorial Day “is all part of a long, tired racist history that’s not going away.” Luckett, who also is an assistant professor of history, adds that efforts to end the commemorations don’t succeed because of the political and racial makeup of legislatures in the states where the observances occur.

At the predominantly White University of Mississippi, commonly known as Ole Miss, where several acts of racist vandalism have occurred in recent years, Dr. Shennette Garrett-Scott, assistant professor of history and African American Studies, says “it was business as usual” on the Oxford campus Monday—with one exception. “Not on the campus, but just outside the campus there was a big electronic billboard flashing ‘Celebrate Confederate Memorial Day!’”