“We’re here because we think that Signing Day shouldn’t just be for elite athletes, but for young people like you who have worked so hard to earn those college acceptance letters. This is your day,” the first lady proclaimed before a predominantly African-American audience of more than 2,000 high school students during a College Signing Day event at Wayne State University in Detroit.

Among other signs that minority students are embracing the college path, the U.S. Labor Department’s Bureau of Labor Statistics (BLS) reported last month that, among 2014 U.S. high school graduates, 70.9 percent of African-American graduating high school seniors had enrolled in college by October 2014 compared to 67.3 percent of Whites. It marked the first time ever the BLS determined through its population surveys that African-Americans enrolled in college at a higher rate than Whites. 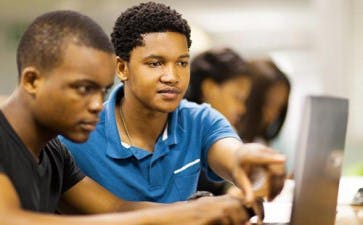 The BLS also found that Asian Americans and Latinos had 86.1 percent and 65.2 percent college enrollment rates in 2014, respectively. Overall, 68.4 percent of 2014 high school graduates had enrolled in colleges or universities. The BLS disclosed its findings in a “College Enrollment and Work Activity of 2014 High School Graduates” news release report published on April 16. The enrollment rates are estimates that are subject to sampling and non-sampling errors, according to BLS officials.

It’s likely the 2014 African-American college enrollment rate estimate will meet some skepticism from researchers and other officials. BLS officials describe the jump from 2013 when the African-American high school graduates experienced an estimated 59.3 percent college enrollment rate to 70.9 percent as “statistically significant,” but said it’s likely to be viewed with caution.

The college enrollment rate estimates are “very volatile from one year to the next,” said BLS economist Steve Hipple.

“We knew [the 2014 Black enrollment rate] estimate was volatile even though” it met the BLS statistical test, he said.

“I think there have been large and successful efforts on widening access to postsecondary education. And there’s been very good efforts among many different populations, African-Americans included, that have raised the ante and made people conscious of the importance of going to college,” Strohl said.

While researchers and other analysts have found that African-American and Latino college enrollment rates approaching that of Whites in recent decades, they note that their college completion rates have lagged in comparison to those of Whites and Asian Americans. The U.S. Education Department’s National Center for Education Statistics (NCES) has found that the six-year graduation rates of African-American and Latino students who began their academic careers at four-year institutions in 2006 were 40.2 percent and 51.9 percent, respectively. Blacks and Latinos who began their four-year college careers in 1996 experienced 38.9 percent and 45.7 percent graduation rates.

Dr. William Spriggs, the chief economist to the AFL-CIO labor union and a Howard University economics professor, attributed the growing college enrollment rates of African-Americans to the long-held value Blacks have placed on education. As higher education institutions have widened college access, African-Americans have responded accordingly but have struggled to complete college, largely due to financial reasons, he said.

Spriggs noted that African-American enthusiasm for college contrasts sharply with the media-driven image that Blacks are not interested in education. “You can’t get that level of college attendance unless there’s something stronger going on. The way it’s presented [in the media], ‘They’re all dropouts, or they’re all not ready for college. They’re all in jail,’” he said.

“You get those [media] stories and [the college enrollment] numbers say that’s not possible,” Spriggs told Diverse.