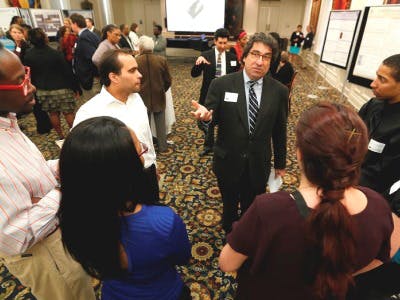 Students and a professor in the Fisk-Vanderbilt Masters-to-PhD Bridge Program in 2014. (Photo courtesy of Vanderbilt University)

Since 2004, Fisk and Vanderbilt universities have collaborated on an academic bridge program that has enabled 55 underrepresented minority graduate students in physics, material science, and astronomy to successfully enter Ph.D. programs. So far, 18 program participants have earned their doctorates.

Known as the Fisk-Vanderbilt Masters-to-PhD Bridge Program, the initiative has provided a template for the establishment of the Tennessee Bridge-to-the–Doctorate program, which is serving underrepresented minority graduate students in a broad range of science, technology, engineering and math (STEM) disciplines.

This week, an inaugural class of 12 Tennessee Bridge students will complete a two-week “boot camp” of science refresher classes and professional development workshops in Nashville. Last week, the 12 students in the boot camp joined with seven others who are entering the Fisk-Vanderbilt program.

The new initiative is being led by Tennessee State University (TSU) and Vanderbilt and is part of the Tennessee Louis Stokes Alliance for Minority Participation, or TLSAMP.

“This [new] program has brought us together … to get [underrepresented minority] students to transition into graduate programs,” said Dr. Lonnie Sharpe, the Massie Chair of Excellence at Tennessee State University and the TSLAMP executive director.

In contrast to “the Fisk-Vanderbilt program [that’s] geared toward students in physics,” Sharpe explains that what TLSAMP has “done is taken it to a much larger scale and includes students in all the STEM disciplines.” Tennessee Bridge recruits STEM college graduates nationally and from TLSAMP schools to apply and participate.

“One of our goals is to increase the number of students attending graduate school. This award allows more of our students to transition into such programs. I am excited about this great opportunity for our students to continue their quest for doctoral degrees in science, technology, engineering and mathematics,” he said.

This past spring, the National Science Foundation awarded $987,000 to TSU to establish the new program as an expansion of TLSAMP. TLSAMP is a NSF-funded collaborative of 10 Tennessee colleges and universities to boost and improve the retention of underrepresented minority students in STEM fields.

Much of the award is supporting the “12 underrepresented minority graduate students who will earn master’s degrees in STEM fields in two years with the intention and goal that they will proceed to and through a STEM doctoral program either at Vanderbilt or elsewhere,” said Dr. K. Arthur Overholser, senior associate dean of the school of engineering at Vanderbilt University.

Noting that his institution has been part of TLSAMP for more than a decade, Overholser credits the alliance’s record as well as that of the Fisk-Vanderbilt partnership for presenting a compelling case to the National Science Foundation for funding the Tennessee Bridge program.

“One of the things that led to our award was our partnership with Fisk University here in Nashville to help produce minority physics Ph.D.s,” he said.

Overall, students in the respective bridge programs are now considered members of a single cohort, Stroud explained. “We don’t really see them as any different. For us, they’re all bridge students,” she said.

Originally, the Fisk-Vanderbilt program was developed with the intent of recruiting underrepresented minorities who were interested in earning their doctorates but needed additional training and professional development within a master’s program that would prepare them for entry into a Ph.D. program. The program has had more than 80 percent success in getting students into doctoral programs, Stroud noted.

“Typically, the students we’re looking for are not ready to enter a Ph.D. program. We are not competing with Ph.D. programs directly,” she said. “It’s not just a master’s program; it’s really like a bridge program focused on getting the student to the Ph.D. the whole time from day one.”