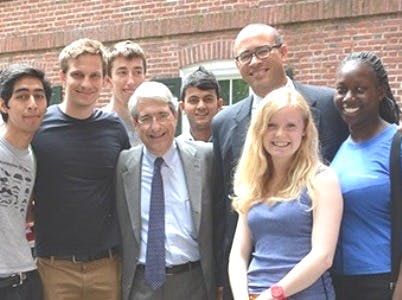 In a move sparked largely by the tragic June 17 shooting deaths of worshippers at a prominent African-American church in Charleston, S.C., Yale University officials have launched a campus conversation on whether to rename a residential college named for 19th century alumnus John C. Calhoun, a former U.S. vice president and senator from South Carolina who was a fervent defender and leading ideologue of American slavery.

In a welcome speech delivered to freshman students on August 29, Yale president Peter Salovey said the Charleston massacre stirred up a long-simmering debate that had “returned to confront us again” over the propriety of retaining the Calhoun name for a Yale residential college where “one in twelve of you has been assigned.”

“What is more relevant to the concerns of the moment,” Salovey told the Yale students and their families, was that “Calhoun mounted the most powerful and influential defense of his day for slavery.”

“In fact, [Calhoun] believed that the highest forms of civilization depend on involuntary servitude. Not only that, but he also believed that the races he thought to be inferior, Black people in particular, ought to be subjected to it for the sake of their own best interests,” he said.

Salovey explained that, rather than Yale officials moving immediately to rename Calhoun College, students and other members of the Yale community “should consider the dangers, for instance, of judging past figures according to views and standards that evolved and developed after their own times.”

“We also must consider what it means to attempt to efface or distance ourselves from our own history. Some have sought to control our thinking about the past by selectively wiping away its traces, eliminating or softening its inconvenient or unflattering or dangerous elements,” he noted.

“The time has come for us to have a thoughtful and public discussion of what we ought to do [and] that everyone connected to Yale will have something to contribute to the discussion, whether faculty, staff, students, or alumni; whether historian or philosopher or psychologist; and whether one initially sees the issue as central or peripheral to the way we understand ourselves as a community,” Salovey urged.

In another freshman address, Yale college dean Jonathan Holloway told students that exploring questions on the university’s history, identity, and the role of race in American life is a part of the college education that awaits them.

“To be a Yalie is to be an engaged citizen—of the university and the world—so these are questions that we need to think through together,” said Holloway, who is a scholar of African-American history.

Holloway noted that the university’s benefactor, Elihu Yale, an 18th century British shipping magnate and philanthropist, likely did not own slaves but certainly profited from the international slave trade.

“To be clear, I am not advocating that we change the name of this university—that much is off the table—but these questions lead us to even more questions: Is it possible to simultaneously hold conflicting feelings about a thing and its history? Can we love Yale College and quarrel with the man who gave this place its name?” he said.

“Inevitably, honest and informed debate will yield a range of possibilities about the right way forward,” he said.

Salovey and Holloway, in a web post, have invited Yale alumni and other community members to share their views via a web-based feedback page and at conversation events organized by the university.

Dr. Jeffrey Hyson, an assistant history professor at Saint Joseph’s University and a Yale alumnus, said he believes Yale officials have wisely chosen to put forth the Calhoun name controversy as one to be discussed and debated within the Yale community.

“What makes me most cautiously optimistic is the inclusivity of the conversation,” said Hyson, who earned his undergraduate degree from Yale in 1989.

“The fact that alumni are certainly being engaged; that the events that I’ve seen draw on a wide range of disciplines; and [Yale leaders] also put this debate in a much wider context [about] … how do we place this in the context of broader challenges of race and diversity in higher education” makes the conversation a valuable and an intellectually enriching one for Yale, he noted.

Dr. Honor Sachs, an assistant history professor at Western Carolina University who specializes in early American history, said it’s not surprising that Yale, like so many other higher education institutions in the U.S., is taking concrete steps to resolve what has been a longstanding issue.

“This [conversation] is part of a nationwide trend to look at monuments, memorials—things that have been part of historical memory and our landscape for many, many years. [Yale is] part of this movement. I think it’s important that they’re starting to think about that history more critically,” she said.

Higher education “institutions—colleges and universities—have been turning their attention more critically to their involvement with slavery, with the slave trade, and some schools have taken leading roles in understanding and rethinking their role in the slave trade. Brown University, in particular, has been exemplary in acknowledging their participation in the slave trade,” she said.